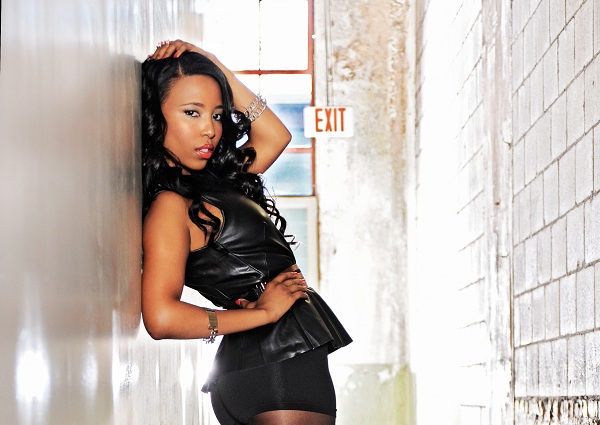 The journey as a new artist is not an easy one. You see millions of mixtapes released every day with intentions of creating a buzz and developing a fanbase, but most of the time it’s to no avail. However, there are rare instances where it does work such as the case of Coline Creuzot who has been putting out a mixtape every year for the last six years. The rapper’s mentality that she possesses has led to a big following for this singer and songwriter. YouKnowIGotSoul had a chance to talk to Coline about her new EP “Acapella Now”, her journey in the music industry as well as the struggles that have come with it.

YouKnowIGotSoul: You put out your EP “Acapella Now” not too long ago. Talk about it and the creative process behind it.

Coline Creuzot: Well I’ve put out a mixtape every year which I’ve been doing for the past six years. It’s always been a great response and they were more fun, club records. That was just to build a buzz. 2012 I decided that I wanted to put something out with a little more substance and songs that were a lot more meaningful to me in terms of the subject matter and the things that I was doing vocally on the records. I partnered up with Happy Perez who is also from Houston. He did a single for me four years ago that was a big success for radio in Houston. I went to him and just started writing the project and I did three songs with him and then three other songs with some different hot up and coming producers, so it all came together.

YouKnowIGotSoul: You have the single “You” right now. How did that song come about?

Coline Creuzot: That song is actually about a real life story. I write a lot as a form of therapy. Some people work out, some people write music. Everyone has a different outlet. I went through a breakup at the end of 2011 and that’s what that record is about. I got it out and went and recorded it. Everybody ended up loving it, so we ended up choosing that for the first single.

YouKnowIGotSoul: Talk about your songwriting process and how you put a song together.

Coline Creuzot: I’m kind of strange. When I hear a track, the second that somebody plays it for me, I either hear something in my head in terms melody and lyrics or I don’t. So that’s just kind of the way it was when I picked out the tracks on the EP. Most of the time, a track will speak to me instantly. My writing process, I kind of just vibe out. It’s a hard thing to explain how it happens, but it just flows.

YouKnowIGotSoul: Talk to me about the balance of being a songwriter and being an artist.

Coline Creuzot: It’s kind of tough because I’ve always considered myself an artist first. I actually got the opportunity to take a meeting with EMI a couple years ago and my manager at the time was good friends with the Vice President there and he ended up signing me off of the song “Acapella Now” actually. From there, it’s like a totally different side because you have to take yourself out of it sometimes and write a record that sounds more like somebody else. If there’s a specific person that needs a record, you can still do you lyrically, but it’s a different process in terms of how you may attack a song vocally or the way you may sing it. It’s definitely been a blessing and a learning process. I’ve gotten to meet a lot of cool producers and other writers who came on board for this EP. It’s a balance, I love it. I love doing both for different reasons. I love songwriting because I can write records that I would never sing for myself, but maybe a genre of music that I love. On the artist side, it’s just all me.

YouKnowIGotSoul: You’ve already dropped a couple of mixtapes throughout the year. Talk about the progression of your sound since the first one and how it has developed since then.

Coline Creuzot: The first mixtape I had was called “Head Turner”. It had a very Houston vibe in terms the music and the production. Paul Wall actually DJed the mixtape and contributed to it. My manager at the time was also the manager for Paul, so we had a lot of love from Houston and the Houston rappers. It kind of had a more edgy sound and Houston type swag to it. I think as time progressed, I became my comfortable in my writing and in doing ballads and records that I felt really defined me as a person and as an artist versus doing records that I wanted everybody else to feel like songs that would go hard in the club.

YouKnowIGotSoul: From the mixtapes, I know you’ve been able to develop quite a big following. Do you think the mixtape route has been effective for you?

Coline Creuzot: It definitely has. It’s funny because the way I started my grind was kind of like a rapper. We were putting out mixtapes and our manager had me in the club every night. When we were promoting records, we really attacked it like a rapper would do which ended up being very beneficial for me in Houston at the time. I ended up getting a ballad on the radio and they were playing it at the club at night at one point and so it was great. It helped me gain a fanbase literally one person at a time. It’s been a lot of work and I still have a long way to go, but I don’t regret that route at all. I think it was a great route.

YouKnowIGotSoul: A lot of new artists put out EPs and mixtapes, but it may not be as effective as what you’ve been able to accomplish. Aside from the mixtapes, what else do you think has been key to developing your fanbase?

Coline Creuzot: I had a producer tell me a while back that you’re only as a relevant as your last record. I try to always continue to record and even uploading covers to my YouTube channel. I just try to stay relevant in whatever it is I’m doing. It could be the smallest thing like a YouTube video. The fans will say “Hey I wanna hear you sing Keyshia Cole’s new record” and I’ll go and upload that. It’s just always staying in contact and keeping your name out there which can be hard, but I think people can forget about you so quick because the internet makes music accessible to everybody at anytime. There’s always new artists, so I think it’s definitely staying connected with your fanbase and continuing to release new music.

YouKnowIGotSoul: Initially for a lot of new artists, the first and only goal is to sign with a major label. Now that you’ve been in the music industry for awhile now, is it still your main focus to be signed?

Coline Creuzot: That’s kind of a trick question because it’s definitely something that you want. It makes things a little easier when you have a machine behind you. I think as an independent artist it’s kind of hard because you have to wear so many hats. That could be a great thing because you learn a lot of things about yourself, about the business side and gaining a fanbase. I think it’s definitely a goal but it would be a goal but I would want it to happen in the right way. I’d like to have a movement like Kendrick Lamar. He’s been putting in all this time and I think it’s so important that you’re valued to your label and they see what everybody else sees in you.

YouKnowIGotSoul: Of course your journey hasn’t been an instantaneous thing. You’ve had to really grind for everything you have. Throughout this entire process, was there any thought of just being a writer and not trying to be an artist anymore?

Coline Creuzot: No and a lot of people ask me that all the time. I was working with this producer and he actually used to be an artist. He was like “Why do you want to be an artist? It’s so much work. We’re sitting here writing records for other people and that’s where the money is. Why do you want the stress and the headache?” I thought about it for a second and I was like “Wow”. To the average person that makes sense, but it’s just always been in my heart to be an artist. It’s who I am and what I am. When I write records, I want to sing them. I feel like nobody can do my record the way that I envision it. It’s like a work of art for me. I love doing both, but it’s just my thing. It’s what I wanted to do ever since I was a little girl. You can write forever, I can be 65 and writing songs. You don’t have a shot at being an artist forever.

YouKnowIGotSoul: I know you were on the BET Music Matters Tour. Talk about that and how that helped your confidence.

Coline Creuzot: My former manager got me on that campaign and it was really cool. Elle Varner was a part of it as well as J. Cole. I was just honored to be amongst that group of people and learn about new artists. It was definitely a plus and it helped me gain some exposure and reach some new people. It was definitely a blessing.

Coline Creuzot: The next step is to get some shows booked. I keep everything updated via my Twitter and Facebook so people can be informed. We’re actually gearing up to drop the second single. I’m about to go back in and do a video for that and get everything set in motion for a release date which will probably be early March.