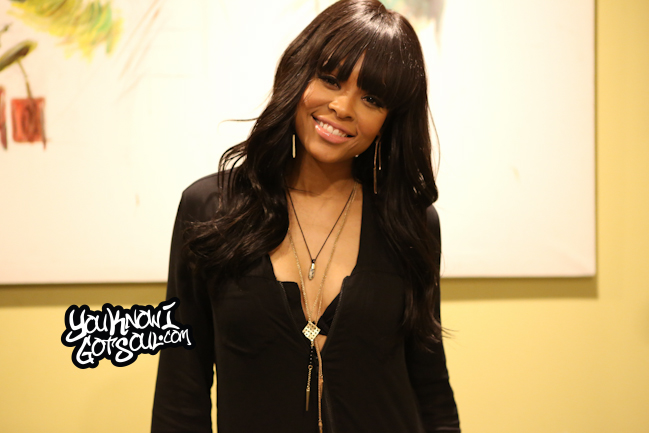 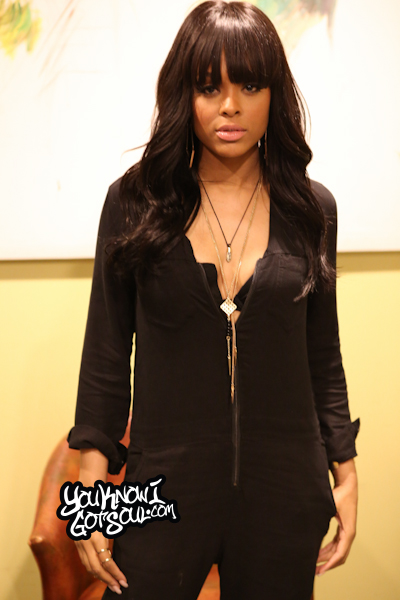 Many know Demetria McKinney from her prestigious acting career, most notably on “Tyler Perry’s House of Payne”, and currently from her appearances on “Real Housewives of Atlanta”, but her talents extend beyond what you see on TV. A powerful vocalist who has a real gift in music as well, she’s now embarking on a music career and has a chance to be something special here. Demetria’s latest single “Trade It All” gave us a great introduction to what she’s capable of, bringing a sound that is sure to make traditional r&b fans happy. YouKnowIGotSoul sat down with Demetria McKinney prior to her performance at our Sol Village show in NYC and discussed the path to her music career, balancing acting vs singing, using Real Housewives of Atlanta as a platform, her upcoming EP, and more.

YouKnowIGotSoul: Many know you from your prestigious acting career, but talk about where you developed your talent in singing and when that came into play along the way.

Demetria McKinney: Well singing came into play before acting ever did. I’ve been singing since I was 3 whether it was good or bad. I was making everybody listen and I grew up singing in church which is where I cultivated a lot of who I was along with the love of Whitney Houston. She was a huge inspiration to me and she still is. I just want to add my little 2 cents to the $50 that she put in.

YouKnowIGotSoul: Talk about your upbringing in church and how it influenced your music career.

Demetria McKinney: Church is an expression of love and music in church was one of the main reasons that I really realized what love was. When I didn’t know how to express myself, music was my therapy and my boyfriend. When I was mad at mom and I couldn’t get to my daddy, there was music and Whitney was always the soundtrack to that. Coming up in church and realizing what kind of gift and love language that music could be, it really made me want to go for the gusto with it.

YouKnowIGotSoul: How was it like performing concerts at a young age and how did it prepare you for your music career now?

Demetria McKinney: Actually at a young age, I was terrified to do any kind of concert that didn’t involve my grandma putting on her teeth and sitting in front of the pecan tree. I was like “This is for family only” because those were the only people I trusted. As I got older and started singing in the church and choir, they got to the point where they were pushing me to the front to do the leads. Then I got to musical director and then I got a vocal scholarship. It was each level happening at its own time and grace, but it was never a real push for it to be as public as I’m pushing for it now until 4 or 5 years ago. That’s when I was like “You know what? I need to get to some of these open mics and really pay attention to how I perform”. It didn’t just entail the singing but also giving myself more stuff.

YouKnowIGotSoul: Whitney Houston was one of your influences growing up. Were there any other artists that influenced you?

Demetria McKinney: Other artists that have influenced me musically would be Chaka Khan, Aaliyah, Celine Dion and also Pink. I listen to The Fray and a lot of other genres of music which I think make the melting pot that is me.

YouKnowIGotSoul: We’re loving your new single “Trade It All”. We knew you from acting but we hadn’t heard your vocals before so we were really impressed. Talk about the single.

Demetria McKinney: The new single “Trade It All” was actually penned long before “The Real Housewives” phenomenon landed in my lap. Once that show came out and they chose to make the relationship that I wrote “Trade It All” all about, it was such a spectacle and I was like “It’s the right time now. Let’s use what they make a negative into a positive”. So the song is definitely about my real life relationship with someone whose name should never be said ever again on television and it’s about being in love and being in love with the right person, but wanting that forever symbol in the midst of it. There’s nothing with it and there’s no bad to it, but can we really make this thing forever like we’re saying? When I got an opportunity to do the video, I wanted to capitalize on the reality that is not reality. What people see on the reality television is just what they need for a storyline. They don’t get to see the behind the scenes and the dedication of the people in the mix. Shout out to Claudia Jordan and Cynthia Bailey because we are genuinely real friends.

YouKnowIGotSoul: You’re working on an EP What can you tell us about it?

Demetria McKinney: The EP is “Officially Yours” and it basically is about a 6 song demonstration of what this diamond is. I say diamond because every diamond starts from a rough place. Once you cut it, it forms a different color and a different shape. All those colors, lights and facets make the woman that you see here and every other woman. Hopefully some of the people will identify with some of the diamonds.

YouKnowIGotSoul: Any artists that you’re looking to collaborate with in the future?

Demetria McKinney: I would love to collaborate with everybody. Not just in my genre. I love how Dido paired up with Eminem. I love The Fray and Coldplay. I’d love to work with Drake and Nicki Minaj. It would be just be great to explore what music can do and involve me in. I’m open to all the possibilities.

YouKnowIGotSoul: You recently joined “The Real Housewives of Atlanta” cast so what type of platform can that be for your music career?

Demetria McKinney: It’s the only reason why I came on the show. Music was it. Doing all the shows that I’ve gotten to do, people recognize the character but they didn’t know who I was. I came onto this show for my storyline to be my talent. That was it. Thanks to the show in Puerto Rico where I got to do a love performance with all the ladies. My song “100” which had been out for a few months and nobody really knew about it, it came from obscurity to number 4 on iTunes in less than 48 hours. I recognize the power of the platform and I just got in there with tunnel vision with that thing. The shade, drama and non-sense can get to you, but I’m going to leave music as my mark.

YouKnowIGotSoul: We’ve seen you in a lot of roles on different TV shows. What are some things we can expect as far as taking some of that energy and putting it into your performances?

Demetria McKinney: Each of the characters that I’ve gotten an opportunity to play, I’ve picked them and I take them because I feel like I can learn from them. Walking into anybody else’s shoes, if that corn develops, you might want to learn something from it. Getting on stage, I’m unusually a shy person and I get nervous every single time, so getting on stage and having to harness that and realizing that fear is not necessarily that conquers anybody other than those who surrender to it. Also recognizing that I have to put on this persona and this person that is in there, I have to bring that person out. So I’ve gotten the chance to hone in to the inner me and with all of the different music that I’m doing, you’ll get to see a couple of the me’s. The acting has definitely helped to make sure my stage presence is there.

YouKnowIGotSoul: Looking beyond the EP, what are your plans in the future musically?

Demetria McKinney: Right now I’m doing it independently with RTD entertainment. We’ve been grinding this thing for the last 4 years. It’s definitely a passion project, but I’m looking at an opportunity for an independent situation with distribution and I’m also looking at labels. Thank god that the “Real Housewives” didn’t leave me shattered and crazy looking. Moving forward, I definitely want to make more music. Now recognizing the landscape of music has changed and people aren’t buying CDs like they used to, it’s more about EPs, singles and visuals. I’m trying to be smart about the next move, but it won’t stop. I guarantee that.

YouKnowIGotSoul: How much does the current sound of R&B on radio influence your music?

Demetria McKinney: I try my best not think about the sound that I have to chase. If I have to chase it, that means it’s already out there. I want to come out as genuine as an artist as I am. That’s part of the reason why it’s taken so long to put this music out. I’ve worked with a bunch of prestigious producers, but they’ve wanted to make me the next Ciara, Aaliyah or Whitney. They’ve been there and they’ve made their lane. I want my chance to write my name on the wall and people actually recognizing a song that didn’t sound like anybody. Now inspiration, Whitney is that and Aaliyah is that. You might hear some flex of them in there, but for the most part, I’ve been really trying to concentrate on building my own lane to my spot.