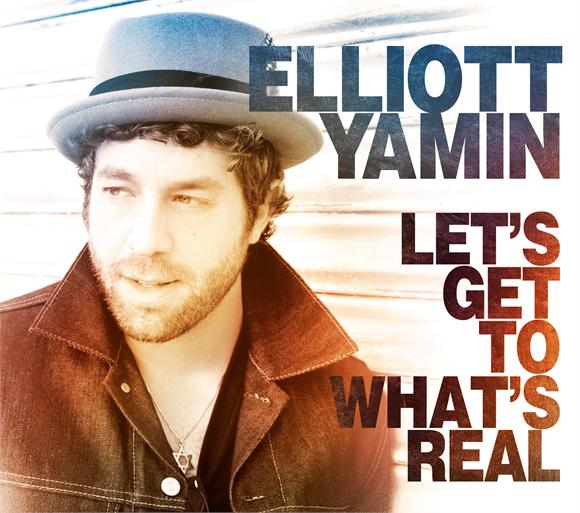 It’s been a long journey for Elliot Yamin since he became a household name as a finalist for American Idol back in 2006. After releasing two albums in the U.S. (the first went Gold), he found himself without a label stateside but had a great opportunity overseas and released his next album in Japan. Now a completely independent artist, Elliott seems excited as ever to have complete artistic control over his music and deliver his most personal effort yet. He just released his new album “Let’s Get to What’s Real” where he tapped back into his original soul influences for inspiration and in the process got back to real artistry. YouKnowIGotSoul caught up with Elliott for this interview to discuss the new album, creating this project on his own, his fan base in Japan, and his journey since American Idol.

YouKnowIGotSoul: Congratulations on the release of your new album “Let’s Get to What’s Real”. Talk about the title of the album and what it means to you.

Elliott Yamin: The title I feel is pretty indicative of what the album is. It’s real music, real musicianship, real artistry, real songs about real issues and real life situations. What I was able to do with this album was really get down to the realness of music and use some of my influences and get back to the sound that I kinda grew up on and try to portray that on this album.

YouKnowIGotSoul: When I was reading about the album, you were quoted as saying “This album is something I needed to do for me”. Can you explain that quote?

Elliott Yamin: Well first off, I didn’t really have any funding for this album, I did it all for myself, me and two other Jewish guys making soul music in the studio! *Laughs* I was so involved in this album from the executive side to the creative side to all points in between. My two previous albums, I was on a label and there was a little more money and attention paid to the process of recording it and putting it together. I just didn’t have the type of freedom that I guess I have on this album. I think that while at the same time I have an eclectic ear and I’m a fan of all music and all genres, and even though I’m known for having a pop hit and being a pop artist is what they call it, I felt that I needed to kinda get back to my roots with this album and kinda get away from a lot of the machine driven tracks. I wanted to make this album more musical and get down with more instruments and live instrumentation and live horns and bring players in that are in my band and incorporate them as well. I was able to accomplish all of that on this project and that’s what I’m really most proud of, that I got to do it my own way with no real outside help from any label.

YouKnowIGotSoul: I know on your last album you worked with some big name producers in r&b, but you mentioned this time you did it yourself. Do you feel like that made it your most personal effort to date?

Elliott Yamin: Absolutely 100%. It was great about getting that experience working with all of these great producers who’ve had all of these hits under their belt in the past, but my job was mainly just to show up and sing. I didn’t really get to be that creative. I wanted to get out of that. I’m a real artist and I’ve got shit to say….or I’ve got “things” to say, excuse me. *Laughs* I got things to talk about and I want to show the listener my growth and show how I’ve evolved. So what I’m saying is I’ve been able to take what I’ve learned in those recording processes and apply it to my own thing. Every song on this album is personal; it comes from a personal experience in my own words. Some songs have a little more personal meaning than others, but overall there’s definitely a 100% personal touch to this whole album.

YouKnowIGotSoul: We featured your song “Gather ‘Round” from this album on the site. Talk about that song.

Elliott Yamin: “Gather ‘Round” was a song that I kinda started the melody and top line for when I was recording my last album “Fight for Love”. So I’ve kinda had that in my back pocket for awhile. I just wanted to do a fun party song, I like the concept of everybody just coming around and gathering in one place and just having a good time. That’s just basically what it’s about. It’s just a fun song to perform and listen to and it just kinda captures a really fun vibe. I think it’s a great way to start off the album because there are elements of funk, soul, rock & roll, any kind of genre you can think of on this album, so that song kinda tells you what to expect the rest of the way during your listening journey. *Laughs* It’s funny, it’s kinda like an instructional song, telling everybody to clap your hands and put your hands together and show up and get your groove on and have a good time. It’s really that simple, it’s just a really fun song.

YouKnowIGotSoul: Talk about the album you released in Japan only last year “Gather ‘Round”. What made you release it only overseas?

Elliott Yamin: Mainly because that’s the only deal I had on the table was with my label there in Japan. I had been signed here and I had been dropped and I still had a good thing going over there. The world’s a big place and music is that one language we all speak, so I’ve been very fortunate to keep my career afloat over there and tap into that market over the years. That’s where the sure thing was at the time and I had new material ready to roll out so I decided to take advantage of that and continue my relationship with the label over there and we wanted to get back over there and tour. It just made sense.

YouKnowIGotSoul: I’ve noticed a trend recently where a bunch of artists we’ve talked to have been doing the same thing with releasing their projects in Japan and keeping their career afloat. What type of appreciation do you feel they have out there for your style of music?

Elliott Yamin: First of all, let me just start from the beginning. My season on American Idol was as insanely popular in Japan as it was here. So, I think that from that time on there, the fans there just gravitated towards me and what I was doing. “Wait For You” was also a big hit over there as well so that helps open up more doors and opportunities for me over there. I just think that the Japanese fans are very loyal. When they like somebody, they just latch onto them and get so immersed in what that artist is doing which is really cool. They are just a really loyal fan base and I think they just have a deep affinity for soul singers and soul music in general. This new project is probably the most soulful effort that I’ve ever done. They were just feeling what I was doing. The Japanese fans are really in tune with whatever you say and they hang onto every word and they are just really loyal.

YouKnowIGotSoul: I mentioned your last album “Fight for Love” and how you had some big name producers on there like The Underdogs, Johnta Austin, and Stargate. We’re big fans of their work, so what do you remember most about working with them?

Elliott Yamin: It was great. Johnta was dope and so was Harvey [Mason Jr.]. It was just an honor to be in the studio with him because I was and I still am such a fan of his work with Joe and some of my favorite r&b artists over the years. So just to get to work with him was amazing. I love the stuff we did together, but again, I wasn’t able to really contribute other than laying down my vocals on songs. There’s nothing really challenging about that. When you’re growing and you’re trying to challenge yourself, that just wasn’t challenging to show up and sing because I have more to offer than that. Not to take anything away from Harvey and how they do things there, a lot of it has to do with my label finding songs for me that would fit the album. All of the experiences were amazing and I got to learn a lot just being in the studio and being around those kind of producers. Johnta is the man, he’s a really cool dude, and we didn’t really get to spend that much time together. Harvey, I did about four, five or six songs with over the past few years so I got to know him a little better and spend more time with him in the lab. Those songs that we did were pretty much in and out; show up and sing, peace out. There’s just more to it going forward. That’s what I wanted to really be a part of this time around.

YouKnowIGotSoul: People got to really know back when you were a finalist on American Idol in 2006. For those who haven’t really kept up with you since then, talk about the growth you’ve experienced.

Elliott Yamin: Just as an artist, just learning how to use my voice in the studio. I think just life experiences kinda lead to great writing and more opinions and getting to travel the world and see how the world works and experience different cultures and getting to travel to Africa and be a part of the Malaria initiatives over there. Spending all of this time in Asia and the Pacific Rim area. It’s just really matured me and opened my eyes to a lot of things that I otherwise wouldn’t have been able to experience for myself had I not got the opportunity on American Idol. It’s just really opened my eyes and made me more mature and I think I’ve just grown as a person and I’m better for it. Learning all of the ins and outs of what making a record entails, it really is a labor of love. I use that “labor” heavily, it’s hard work, it’s not laboring physically. *Laughs* A lot of time and effort and a lot of heart and soul was put into this project. I think that just attributed to everything I’ve been through in my life from birth to now, so that’s what makes me even more proud of this project, getting to convey all of that on record. Just being fortunate to be in the position to do what I love and love what I do. I think it’s pretty evident on these recordings.