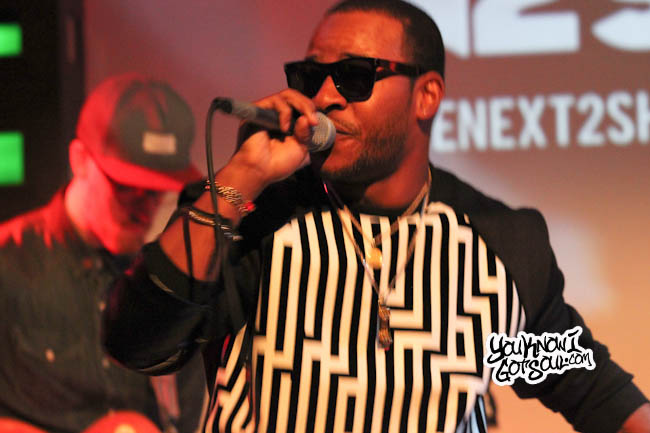 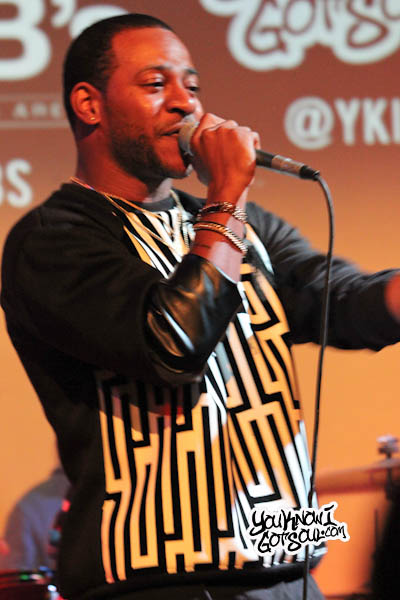 With many aspiring artists, they enter with a nice voice and hope that a label decides to invest a lot of money into them despite not having much else to offer. Fortunately for Eric Bellinger, he decided to model his career after the likes of successful songwriter turned singers like The-Dream and Keri Hilson to ensure that he was able create an identity and sound for himself. With many hours put into perfecting his craft, the hard work has finally paid off as he’s had an opportunity to not only work with superstars like Usher and Brandy, he’s also garnered a lot of attention from his latest mixtape “Born II Sing Vol 2”. YouKnowIGotSoul had a chance to speak with Eric about his mixtape, some of his upcoming collaborations and his thoughts on going down the songwriting route before becoming an artist.

YouKnowIGotSoul: I know you’ve always had aspirations of being a singer, but you decided to start out as a songwriter. Talk about that and if you feel that has helped you develop your sound.

Eric Bellinger: Definitely, I really just looked at people like The-Dream who I knew did the “Umbrella” song for Rihanna and people like Keri Hilson and Bruno Mars who were writing all these big songs and then shortly after, I noticed they came out with an album. Even Ester Dean has a song called “Drop” that she came out with. I’m always about studying and seeing what works and seeing what doesn’t work and that just seemed like a guaranteed no-brainer because at the same time, you’re making money. That’s really what got me because people were telling me that most of the money came from the writing, so I was like “Why not?” It’s kind of like a validation, it allows you to prove to the A&Rs, the presidents and the public that you’re capable of writing a hit song, so therefore it gives the label more assurance and a better chance of them wanting to sign you because they know you’ve done it before and it isn’t like they’re randomly take a risk on somebody off the streets who just has a good voice. Instead of having to pay for writers and artists, you’re really just paying for one and get it all in one. That’s really been a great advantage for me trying to start off my artist career.

YouKnowIGotSoul: Take me through your writing process.

Eric Bellinger: Everyone does it differently. A lot of people already have songs written and they’re just waiting for the right beat. Everyone has their own approach, but for me I really don’t hear words first, I hear melodies first. I really just speak words into the melody, like I’ll put on a track and go in the booth and literally sing a melody down the entire way and have no words. I just do whatever comes to my head and I’ll go all the way through. I’ll do a million of them until I feel like it sounds right because I’m all about the feeling. I feel like you can fit words into melodies more so than fitting a melody to a word because it’s like you’re trying to force a word in a certain part of a song. When you’re trying to force a melody just to fit to your words, it gets kind of confusing and it doesn’t sound as natural to me. When I sing, I kind of just blurt out anything and whatever sounds right or feels good. I’m a melody first type of guy.

YouKnowIGotSoul: Talk about the new single you have out “Green Eggs & Ham” and how you came up with the concept.

Eric Bellinger: I was actually in the studio with one of the guys who is part of the writing camp and it was actually a concept that he had. He said he had never told anyone because everyone wouldn’t take it serous or anytime he would bring it up, people would laugh. But I’m someone who likes that kind of stuff, I’m drawn to things that aren’t normal. Once he said that and I was like “Let’s go” and at first he looked at me like I was crazy to actually believe him! Then I was like “Nah let’s do it. Let’s start it like this” and ideas kept going and then once I put it on the mixtape, people were like “Yo this is my fav song,” so I was like “You know what? Let’s do a video and let’s actually incorporate the Dr. Seuss cartoon in there” and it was really a great response, so I’m happy about that.

YouKnowIGotSoul: Talk about the approach for the mixtape “Born II Sing Vol 2”.

Eric Bellinger: With the mixtape, I really wanted to show people that I could sing and the concept, I wanted to flip them onto metaphors. I really wanted to make this a metaphoric type mixtape. There’s only so many ways that you can say “I love you” or “I don’t want to be with you anymore” and there’s been a million songs. There’s more than a hundred new songs a day over the world, so as far as wanting people to know that I sing, I said “Why not give a group like Jodeci where people love the song “Freak’n You” and really give it a spin and make it a 2012 version.” My buddies Da Internz, who produced the Rihanna “Cake” song are super Hip Hop guys so I asked them to put the twist on it for me on the track and then I just went there vocally, which was a great way to start off the mixtape. There were songs like “Green Eggs and Ham” and “25 To Life” which is like saying a girl is beautiful, but if looks can kill, you deserve to be locked behind bars for eternity. I just really tried to flip things and making everything more visual to where the songs are like movies and stuff.

YouKnowIGotSoul: Have you decided to start on a debut album yet or are you going to continue with the mixtapes?

Eric Bellinger: I’m looking at “Born II Sing Vol 3” more so as an EP or album than a mixtape. I just really wanted to keep the sequence going so if people are coming in and as far as being an Eric B fan, they know that there’s a history. They’ll hear “Vol 3” and they’ll say “I love this, where has this guy been?” and then they’ll be like “Wait, this is “Vol 3” so that means there’s a “Vol 2” and a “Vol 1”. I really want people to go back because I feel like “Vol 1” and “Vol 2” are classic projects that I really want people to pay attention to, so that they know there’s been some longevity to my career as well.

YouKnowIGotSoul: You’ve also worked with Rita Ora who has quite a buzz going right now. We haven’t really heard a lot of material from her, so what can you tell us about the sound you decided to go with while working with her?

Eric Bellinger: I think Rita is going to shock people because she actually can really sing and she has a lot of soul to her voice. When people see her, they’re probably going to think “Wow she’s so beautiful” but when they hear her sing, they’re going to be like “Whoa, Aretha Franklin!” It’s going to be a great contrast for her and it’s great because she came out with a Pop song to reel everyone in and really gain people over and then once she does that, she can show people that she has a lot more elements to her as well.

YouKnowIGotSoul: I know you’re also working on the Kelly Rowland project. Talk to me about that.

Eric Bellinger: Really, it comes from studying their styles and what type of artist they are. A lot of times when people are just writing songs, they’re just like “Oh I’m going to write this song for this person.” They randomly do it at their own studio, and that’s really tough because you have no idea what they want to talk about. Luckily, I’ve been able to be blessed enough to be in the studio with people so I’m able to pick their brain a little. I’m able to create what I feel they would love that I also love. That’s a huge advantage for me, but it didn’t come easy. I’ve been doing this music thing for ten years and I just kept at it and stayed persistent. Now, I’m able to be in the position that I’m in and I know that I worked so hard. It’s allowed me to get in the room with these guys and I think everything is panning out.

Eric Bellinger: That’s really it for now. I’m taking my time to start working on “Born II Sing Vol 3”, but there’s certain sessions when I get called, I’m like “I can’t turn that one down.” Lately, it’s been like Kelly a lot and some Usher stuff.

YouKnowIGotSoul: Who would you want to work with?

Eric Bellinger: I definitely want to work with Rihanna and Beyonce, those are two people who I feel are at the top. That’s kind of how I am, I shoot for the moon all the time and that’s kind of what got me. I have a list and all these people that I’m checking off. Slowly, I’ve been doing a pretty good job like Brandy who was my favorite person and I got to work with her. She was pretty high on my list and of course Usher.

Eric Bellinger: Thanks a lot to all my fans and all the love and support. I want to tell everybody to look forward to “Born II Sing Vol 3” and make sure to follow me on Twitter @ericbellinger. Check my tumblr frequent for updates.