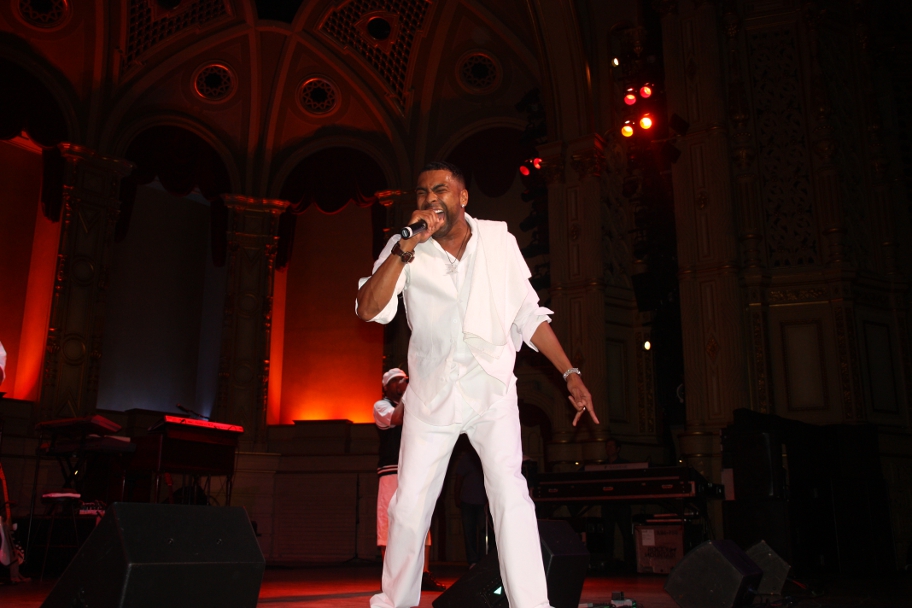 YouKnowIGotSoul had a chance to catch up with Ginuwine at Soulstice 2011’s Meet and greet a couple of hours before his performance at the Orpheum in Vancouver, Canada. Ginuwine reflected back on some of his earlier albums, his current situation with his label and what he has planned for the future including a reality show, a book and a new album.

Ginuwine: I know everybody else said 100%, but for me it would have to be the first one because that’s what made me really. That one also has Pony on it which is one of my biggest songs that I’ve done, so I would have to say the first one, but the second one was a great album.

YKIGS: The second one is my favorite album ever.

Ginuwine: 100% was really well put together if I must say so myself. Me and Timbaland, it was just well put together. The sophomore jinx didn’t happen to me because the second one sold more than first one, so that was a good thing for me. That was great.

YKIGS: You just released the new album “Elgin” in February. Tell us the reception that it has got.

Ginuwine: The reception of it was mediocre as far as people wanting it. They really wanted to hear it, but the reception of it was kind of medium because me and the label weren’t seeing eye to eye. I believe we released the wrong single and it just didn’t gel the way all the rest of them. I think every artist is allowed one of those records and that’s mine. *Laughs* Unfortunately, it happened to be the one I named after myself, but that’s the way it goes and you just got to keep moving. I’m looking forward to the next CD which is going to be called “Completion”. It’s just been a rocky road for the last CD, but we’re still maintaining and going out there doing shows and letting people out there know that we’re still working. We’re still doing a lot of sold out shows and people love great music, so I believe when we do our CDs and do our shows, they know they’re going to get really good music and really good performance so they’re going to continue to see us.

YKIGS: Unfortunately the album didn’t sell too well. As a veteran in this game who has seen everything, how do you respond to album sales and chart performance now as compared to back in the day?

Ginuwine: I find a little comfort in that no one is selling *Laughs*, but still it doesn’t feel well because you’re used to selling 2 million then when you can barely sell 100, that’s kind of messed up. It’s really a sign of the times and right now, people are just downloading and stealing. Someone has to really like you to go out there and physically get your CD. Shout out to everybody who actually paid for the CD. A lot of people don’t realize that’s how we live, that’s our job. When we people take music from us, that’s just like taking food off of our table and it’s not cool. It’s a lot of blood, sweat and tears that goes into the music and those lyrics. To have people just go and steal it, it doesn’t feel well. There’s nothing you can do about it because it’s just as simple as people sharing your files and everything. It’s just as simple as one person buying your CD and then putting it online and then everyone can have it, so it’s kind of hard. Someone has to really like you in order to go buy your CD. Like I said, I find comfort in the fact that everyone, not just me, is going through it. We just have to keep moving forward. There’s nothing we can do about it because the internet has really messed everyone up. It has its ups and downs, but for a music artist it’s a killer.

YKIGS: The first single “What Could Have Been” did some damage on the radio, but what’s going on with the second single?

Ginuwine: I’m off of my label in August. Me and my label aren’t seeing eye to eye. Sometimes you run your course and in a relationship sometimes, you can’t go any further. You bump heads and that’s where we’re at right now. There will be no second single. I still don’t believe I got the proper push that a veteran like myself should have gotten. It was messed up the way it was. That just happens in the business and that’s the stuff that happens behind closed doors that people don’t really get to see. I believe my real fans will truly support me and know what I can do, so it’s alright. I’ll move forward.

YKIGS: I know you have a Reality TV Show coming out, I saw the trailer…

Ginuwine: That’s not the trailer. That was something that was shot three years ago and I don’t know what happened, but they said they didn’t do it. That’s just old footage that we did a long time ago, but that’s not the reality show. We’re actually shooting with James Dubose. He did Trey Songz on BET, Keyshia Cole, and Tiny and Toya. He did a lot of those reality shows and he also did Blind Date. We start to shoot next week.

YKIGS: Everyone is doing reality shows. What is it about your reality show that’s going to make it great?

Ginuwine: No non-sense, no stupidity. I think you have a lot of examples on TV of what not to do, you don’t have a lot of examples of what to do. I think old school TV shows helped in raising your kids and helped in the way things should be done. Now you just see kids disrespecting their parents, you see kids cursing and all kind of things that shouldn’t be done. I just don’t believe we need to contribute to something as crazy that. We need to show how we really are and how we really are is that I’m the Dad, that’s the Mom, these are the kids. This is how you respect us. It’s “Yes Sir”, “No Sir”, “Yes Mam” and “No Mam”. We don’t see a lot of that on TV, so I just want to give an example and show examples on how a family should be versus how families are portrayed on TV.

YKIGS: Just a couple of nights ago, we saw Missy Elliott’s “Behind The Music” on VH1. We saw a clip of you in Da Bassment, so what do you remember most about that era?

Ginuwine: Just fun. It was a learning process and it’s something I wouldn’t give up for the world. It was very educational for an artist such as myself to come up around and see firsthand how the business is and what not to do when you get up there. Still you make your mistakes, but I believe if I didn’t have that education, I’d probably be totally broke right now. I met some great friends like Timbaland, Missy, Static, Tweet and so many people through that. Devante had a great eye for talent, he just didn’t know how to bring it to fruition as far as the success of the talent. We had to move on forward with someone else. It would have been great if all of us could have stayed together. Initially, you’re always going to grow apart anyway, so that’s where we are now, but me and Missy talk and keep in contact. Me and Tim every so often will say what’s up to each other on Twitter. Hopefully one year or one time we can do it all again.

YKIGS: I know you’re doing something similar to “Behind The Music” with the new book you have coming out. Tell us about that.

Ginuwine: That’s called “My Ride” which is playing off of “Pony”. Basically it’s the ups and downs of my career like the drug use, the alcohol, the womanizing, behind the scene stuff of the business like me going bankrupt before and pulling myself out of there, being in trouble with the law. It’s just trying to help a lot of the other artists that’s coming up and show them what not to do and try to guide them through the business and help them when things seem a little rocky in the business. I would like for them to read my book and see that I’ve been there too and if I can pull myself through it then you can also.

YKIGS: Conceptually and visually, what’s the goal for this new album you’re working on?

Ginuwine: Really I’m not starting until after August because that’s when I’m released from my deal with the independent record label that I was on. I just thought of the name “Completion”, I haven’t really started working because I don’t want no one coming back saying I was still under contract, so whatever I’ve done during the time I was under contract, it’s theirs. I don’t think it would be that, but I’m just making sure there’s no crap in the game so I’ll just waiting until after I’m released and then I’ll start working in the studio. I don’t know what direction I want to go in yet, I’m just calling it “Completion” and it’s the number eight CD. Conceptually, I’m just going to go in there and do good music, do as much writing as I can and bring back the old Ginuwine style. A lot of people don’t realize those first five CDs that you heard were pretty much on me, I pretty much wrote 90% of all of them. Hopefully I can get my pen game back up and do 90% of this one too.

YKIGS: You’ve covered Prince’s “When Doves Cry” and you’ve also covered Michael Jackson’s “She’s Out Of My Life”, is there someone else you would look to cover?