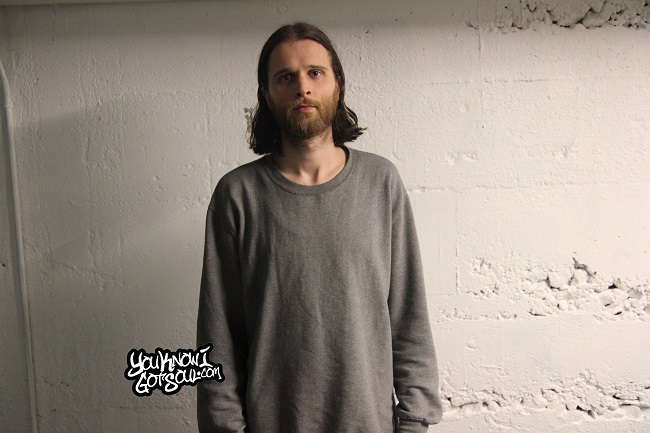 It’s amazing what creative control can do for an artist. Prior to the whole JMSN movement, the buzzing independent singer was known as Christian TV. He was someone with no musical direction aside from whatever his bosses were telling him to do. As soon as he left that situation and branched out to do his thing, he saw his fanbase continually grow. Christian TV transformed into JMSN and he hasn’t looked back since. With a new sound and a new image, JMSN has had the opportunity to create his own music which has now allowed him to go on tour. YouKnowIGotSoul talked to the independent artist about his journey in the industry.

YouKnowIGotSoul: You put out “The Blue Album” a couple months back. Talk about the project and how it has been received.

JMSN: It seems well so far. It’s been received well. It was a big step for me putting out that album because it was a step in another direction, so it’s nice that it has been received so well.

JMSN: It’s a product of myself growing and evolving as a person. It’s a reflection of that. I’m not in the same spot where I used to be during “Priscilla” and the album after that. I feel like I’m a little more, dare I say, happy? I’m still trying to figure it out though. There’s still a lot of doubt and a lot of things. “The Blue Album” still touches on things that’s not super happy, but you can tell I’m figuring it out rather than acting like it’s the end of the world.

JMSN: I have no idea. I just put out music and what I think is quality music. I try to stay connected with fans and I use social media like that. It’s worked so far.

YouKnowIGotSoul: Do you think it’s a certain song that led to you blowing up?

JMSN: I have no idea. I try to just keep making music and making better music. I feel like it’s still happening every day. I don’t think I’ve blown up or anything. I feel like I’m still getting to where I want to be. It’s going to be a combination of a lot of things to get me there.

YouKnowIGotSoul: You’ve gained a lot of attention and it has allowed you to go on tour. Talk about this tour you’re on right now.

JMSN: It’s been great. I didn’t know what to expect. This is our first headlining tour and it was crazy to get such a positive response in places we’ve been. We’ve been selling out shows and it’s surreal. I don’t know what to think about it. You strive and work for something so much and then when you get it, it’s like “That worked!”.

YouKnowIGotSoul: You brought Rochelle Jordan along for this tour. Why did you decide to go with her as your guest for this tour?

JMSN: I’m just a fan of what she’s doing. I was such a fan of the song “Low Key” and I thought it would be cool to add her to what we’re doing.

YouKnowIGotSoul: Your sound is so unique, so who were some of your influences growing up?

YouKnowIGotSoul: You’ve had a couple of different situations and you’ve been signed to major labels. You’re running your own label now, so what’s the biggest difference so far?

JMSN: The biggest difference is freedom. The freedom of not having to answer to anyone but yourself. You have to keep yourself working hard because nobody is going to do that. Granted when you’re on a record company, you still have to go out and do it. You can’t rely on anyone else to do it for you, but the freedom of everything and the freedom to make the music I want and the freedom what videos I want. Freedom is a very important thing to me and it is what I strive for everyday in my life. The more freedom I have, the better my life quality will be.

YouKnowIGotSoul: I’ve noticed your music has changed so much since your major label days. Would you say the sound you were working on previously was a reflection of your life at that time or was it just the label pushing you in that direction?

JMSN: It was definitely that as well as the major label pushing me. The reason why it was a reflection of my life was because I was letting these people influence my life. My life has always been music, so whatever music I was making whether it was being influenced by somebody else, it was a part of my life. When I was making that, I was influenced by a lot of other outside noise. I’m not going to say that wasn’t a part of my life because it was. When I started listening to myself, it’s when I started making JMSN stuff. I stopped listening to all the noise. There’s always going to be noise, but it’s just tuning it out and learning to trust yourself.

YouKnowIGotSoul: What’s really impressive about you is your versatility. I know you also produce and write, so how did you develop those skills?

YouKnowIGotSoul: How did the JMSN thing all come together for you? You were at different situations before that, so how did you get to where you are now?

JMSN: I had made the record “Priscilla” and this was at the tail end of my deal. I had made the record and I showed them the song. I had released “Girl I Used to Know” as a Christian TV song which was a lot different than the other Christian TV stuff I had been doing. I was like “This is the direction I want to go in” and they were like “We don’t want to put this out. This isn’t something we can push for radio”. I was like “I’m changing up my shit. I’m not listening to whatever you guys are saying anymore” and they let me go. That was how JMSN started. Like I said, I stopped listening to all the outside noise and I started listening to myself. I just want to be happy doing what I want to do. It’s my right and it’s what you should strive for. That’s what I strive for at least.

YouKnowIGotSoul: Moving forward, would you ever consider signing with a major label again?

JMSN: I’m happy as an indie artist, but who knows. We’ll see what happens. I would have to know the situation and to tell you that, I can’t predict the future. I’m not closed off to anything. Maybe tomorrow I’ll start rapping, so who knows? *Laughs* I hope I don’t.

YouKnowIGotSoul: You were one of the pioneers of this whole alternative R&B sound that’s going on now. It seems a lot of artists are starting to make music with that same feel, so do you think it’s becoming oversaturated?

JMSN: I don’t know. I don’t pay attention that deeply to trends and stuff like that. But that’s why “The Blue Album” was a step away from that as well. I kind of wanted to step out of that because I don’t care to be a pioneer of a genre. I want to be an artist with no genre. I just want to be the JMSN genre, so I’m taking steps towards that. I’m not worried about fitting into any type of genre. Yeah, there’s always going to be an oversaturation of stuff if you’re listening to that genre long enough. There’s an oversaturation of rappers, but if you’re digging that deep then yeah you’re going to get oversaturated.

JMSN: We’re going to Europe and we’re going to tour over there. We’re touring the places we missed in the US in May. We have a lot of videos for every song, so we’ll be releasing those soon.