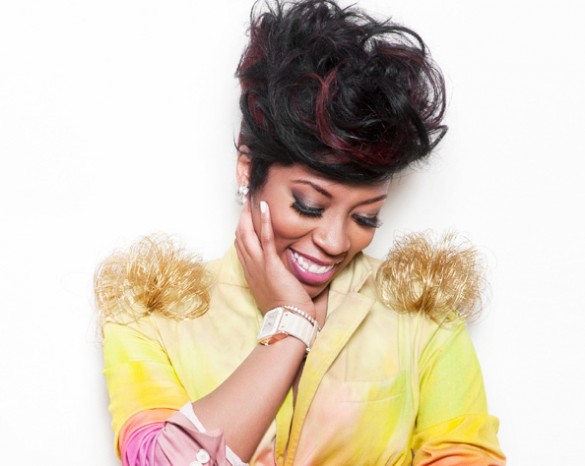 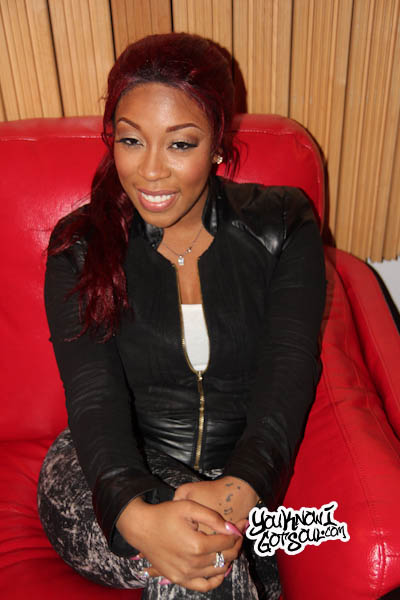 K. Michelle has never been shy about expressing the way she feels or being herself; and don’t expect that to change now that she’s signed her new deal with Warner. With the extra stardom that has come from starring on “Love & Hip Hop Atlanta” has also come extra haters who seemingly want to bring her down. Fortunately, she’s been able to tune them out and focus on her music career which is currently blossoming before our eyes. We never got a chance to hear her debut on Jive, but now with added promotion from reality TV, she’ll have a great chance to make her new album “Rebellious Soul” a success. We sat down with her during a recent promo run in NYC and discussed what makes her a “Rebellious Soul”, how she’s expressing herself on the album, ignoring the haters, her favorite part about being on reality TV and more.

YouKnowIGotSoul: You recently announced the new title of your album, “Rebellious Soul”. What’s that all about?

K. Michelle: I decided to name my album “Rebellious Soul” because it’s basically me. I’m always in trouble for my beliefs and I’m not a very scary person. If I believe if, I say it, if I feel it, I do it. I really don’t care who’s there to judge because I feel like I’m being me. That’s basically it, so “Rebellious Soul” sums me up, and even my music. My music is very rebellious. I’ll sing and say the things that most r&b girls won’t say. So “Rebellious Soul”, it had to be that.

YouKnowIGotSoul: Musically, what is the direction of the album? Will it stick to your r&b roots or will it take on some of the latest trends?

K. Michelle: I’m definitely not following the latest trends on this album, because I don’t even listen to the radio. It’s going to stick to some r&b roots, but I am a classically trained pianist and I do play guitar and I’m a very musical person as far as different sounds and different things I love to hear. I don’t like people handing me a track and saying to write to it, everything is being created and centered around me. I’ll get a piano and I’ll start to sing and I’ll hand it over to a producer to produce. It’s definitely a very organic feel on the album, it’s very honest. There will be a lot of r&b for my r&b fans, but I will also introduce them to the fact that I’m a huge country fan. I’m also going to introduce them to other music as well. I’m very excited to see the reaction.

YouKnowIGotSoul: As a very talented writer, you’re able to dictate the content of the album and which direction it goes. Your original album was going to be called “Pain Medicine”, you were going through some things, but I read this time around it’s a little different. What’s the direction in that sense?

K. Michelle: Lyrically, I’m huge on songwriting, that’s very important to me. Coming up under R. Kelly who is an amazing songwriter, he took so much time to train me. Within 3 minutes and 30 seconds you have to tell a whole story. I think nowadays a lot of songwriters just throw in words because they rhyme or just to get through the song. The direction of this album is telling the stories of my life, because I know they are in someone else’s life as well. I went through pain, but this album isn’t about crying over a man the whole album. I’m not doing it. There’s other issues in life other than a man that woman have that we have as people. We have the loss of loved ones, we have the loss of self and self esteem and things like that. This album will be about things like that. Sometimes we have self esteem issues and I have this record that I absolutely love and everybody is going crazy about that I recorded it with called “I Don’t Like Me”. It’s a very bold statement to say but I’m very honest in my music and sometimes I feel like that. Not every day, but you might wake up and say “What’s wrong with me”. Very honest lyrics, there’s definitely not going to be anything on the album that I haven’t gone through that I can’t relate to.

YouKnowIGotSoul: I’m really interested in hearing about this collaboration you mentioned on Twitter with Elle Varner. How’d that come together?

K. Michelle: Me and Elle Varner, we have the same management, we’re on MBK. We’re managed by Jeff Robinson. She has a big personality just like me and she was just in the studio and we’re like “We should work together”. She’s very musical. I’m very funny about the people I collaborate with because it can either knock you down a notch or whatever. Creatively and musically, Elle is someone I see eye to eye with and I think that makes for a great collaboration.

YouKnowIGotSoul: Something you mentioned earlier in this interview is you do what you feel and say what you feel. You’ve had a mixtape called “0 Fucks Given” and I saw on Twitter you wrote “I started winning when I stopped caring what other people thought”. How has that outlook helped you in your career?

K. Michelle: Just not caring what people think, people are very evil. I don’t think I realized how hurt people are in the world until “Love and Hip Hop” and my fan base grew. The more hundred of followers I got, the more hate I got; people will follow you on Twitter just to harass you. It was very difficult because I was like “You don’t know me, how could you wish me dead or say I was lying.” It could be hurtful, especially because I’ve got a big mouth and I could be mean, but I have a huge heart. I had to stop just really caring and just seeing that those people are hurt more than anything. They are trying to hurt me because they are hurt. So once I stopped caring about what people thought and once I stopped caring about people telling me what kind of artist to be, I realized. I was off a label and I just sang what I wanted to sing, tweeted what I wanted to tweet, just lived like me. That’s when I’m able to go and do shows now, sell out shows, have fans write me letters and crying. It’s because I’m being me. If I’m always wrapped up about what you think about me, then I can’t be me. Stop caring, start winning!

YouKnowIGotSoul: It’s definitely working! Obviously you’re a super talented artist, you had the deal with Jive before, but how much effect do you feel you starring on “Love and Hip Hop Atlanta” had on signing your new deal with Warner?

K. Michelle: I battle everyday with being on “Love and Hip Hop Atlanta”. There are days when I say I’m not going to do it again. But you know, management, we try to make the best decision. I can honestly say if it wasn’t for Mona Scott. I’ve been singing these same songs since I was on Jive. Some people knew me, but not like now. People wanted to know what happened to me, that gave me the avenue to explain exactly what happened and it happens to a lot of artists. I was just blessed enough to get the platform to talk about it. I feel like if it hadn’t been for “Love and Hip Hop” I still would have got a new deal because it’s in my destiny, that’s something I was supposed to do. Every time I try to stop singing, something else comes. But, would it have taken longer, would it have been an awful deal? Who knows. Doing “Love and Hip Hop” and putting a song on iTunes and it goes straight to #6 just because, that definitely came from “Love and Hip Hop Atlanta”.

YouKnowIGotSoul: You mentioned it’s a little trying at times being on the show. What’s your favorite part about being on it?

K. Michelle: My favorite part about being on “Love and Hip Hop Atlanta” is, I don’t know at this point! *Laughs* I’m blessed, that’s all I can say. I’m blessed to be on a show with 6.5 million viewers and people can learn you. I’m always open with my fans, but at the same time, sometimes I feel like “Man, I’m really open!” *Laughs* I’m blessed to be on the show, I will say that’s my favorite part, just to have the avenue to push my music and the avenue for people to see the creation of this album.

YouKnowIGotSoul: In a time when r&b isn’t really in the fore front like it used to be, how important do you think these types of reality shows are as a promotional tool?

K. Michelle: I think it’s very important that these shows have a lot of r&b artists. It’s like we’re listening to all of this kind of music, that’s not the kind of music I ever wanted to sing. R&B is so amazing and the thing about it is, I have to blame the radio for not playing it or just taking the easy way out and pushing something easy on our kids. Our kids are not going to be able to go back and listen to it years from now. It’s very important, it does give people the platform to really hear r&b music.

YouKnowIGotSoul: As an artist who’s been through struggles in their career but persisted and succeeded to now have another deal, what advice would you give to upcoming artists struggling on the come up trying to make it?

K. Michelle: I think a message that I can give to up and coming artists is it’s not easy. If you’re not ready for the fight, then don’t do it. A couple of my peers in the game have had it easy, just being honest. But, they’ve also had their own struggle. You can’t knock somebody else’s struggle because it’s not like yours. You do have to understand just because you have talent it doesn’t mean guaranteed success. Just because you have talent, doesn’t mean you’re a star. If you want it you fight for it, that’s all I can say, it’s not going to be easy.

K. Michelle: Thank everybody for the support you’ve been giving me, it’s really appreciated. Without that outpouring of support and calls to stations and tweeting at record labels, I wouldn’t have got this deal probably as soon as I did. Also, I’m headlining for the first time at B.B. King’s on February 19th. I did S.O.B.’s and those two shows sold out, so make sure you guys get to this one. I’ll be at Howard Theater on February 20th. I look forward to seeing you guys and I’ll be presenting new music from the album.