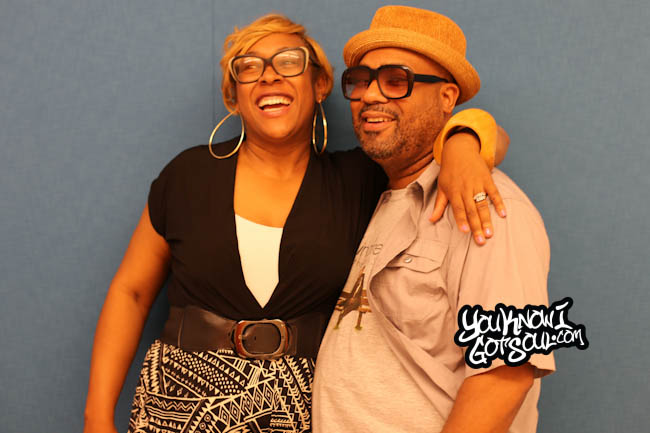 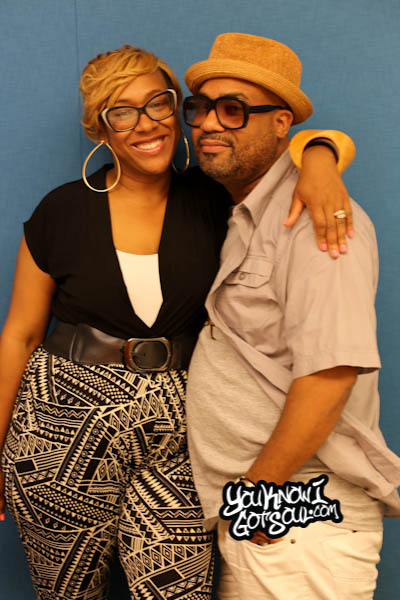 Kindred the Family Soul has always had a bond between them that basically no other groups could claim, the bond of marriage. That has shined through in their music over the years, especially in their latest release “A Couple Friends”, where they come off as the relatable couple who lives down your block. Singing about the struggles of everyday life, they make it clear that they have obstacles to overcome just like everyone else. “A Couple Friends” is their 5th album now and the group is sticking to the tried and true formula that has endeared them to so many music fans over the years. YouKnowIGotSoul sat down with Kindred during a recent NYC promo run and discussed what to expect on the new album, how marriage helps their chemistry in the studio, their motivation for creating music, and much more.

YouKnowIGotSoul: The new album ” A Couple Friends” is out now. Introduce us to the new project.

Aja: “A Couple Friends” is our 5th studio album and the concept of it comes from us going back to the basics no matter what we’ve done or how many years have gone by. We’re still friends. We’ve done everything we’ve done with just the two of us. I’ve experienced some of the best things in our lives with my mate which has been an exciting thing for us and journey for us. It’s really the subject matter of the kind of songs and music that people have come to relate to us with. Mostly because of the relationship we’ve built over the years has caused us to have a relationship with our fans that really look at us as everybody’s couple friend. The couple you invite over to play spades, cookout or a double date or that you call when you’re going through something. I feel like that’s the relationship we’ve built overtime with our fans. It kind of has a double meaning and maybe even a triple meaning as well in terms of that now that we made these 5 records and earlier we talked about Dre & Vidal, Steve Mckie, Ed Bell and this group of producers that we worked with have been the dream team and key players to all of our albums. This was such a good easy coming together for that. We opened it up and they came and knew what to give us. It’s a working relationship with them that has blossomed into a beautiful dance. Really that’s what “A Couple Friends” is about”. It’s about pulling together all those aspects of what “A Couple Friend” really means to making this project.

Fatin: When this album comes out, don’t forget to share it with a couple. *Laughs*

YouKnowIGotSoul: Listening to this album, you can really hear how people can relate to what you’re singing about. It’s about relationships and the struggles people go through. Do you think that’s why your music is so welcoming to new fans?

Fatin: We hope so and we’d like to believe so. I think it’s the same place we’ve always been in and just trying to be truthful, honest and sincere with the people who listen to the music. We see them in the music that we create and we’re looking at them as inspiration. I guess they see us as an inspiration so it’s a two way street. We just continue to do that and hope it resonates with people. First and foremost, it has to resonate with us and feel good to us in our heart when we go to write it or record it. We always start there. If it makes us feel happy and feel good, then we don’t have to feel afraid or hesitant to share it.

YouKnowIGotSoul: The first single “Everybody’s Hustling” is making some noise. What is the inspiration behind that song?

Aja: That song really is about just celebrating the average person and how their everyday triumph over adversity may be overlooked because the way we glorify wealth and what our society measures success is. We found that especially amongst our fans have viewed us as being quite successful just because we have been able to stay married, have a family and be open about it. We’re not special in that. Most people and a lot of people function like that. Many people get up every day, go to work, take care of their families, do the best they can, are charitable and doing quite a bit with themselves without having a lot of money. I think we have to get back to celebrating those as being triumphs and not being small ones. That’s really the sentiment behind “Everybody’s Hustling”.

YouKnowIGotSoul: I read this is the first album you created where you weren’t excepting a child or just had a child. What did that allow you to do differently?

Fatin: Nobody was crying at the studio. Their voices didn’t get heard on the track. WE couldn’t keep them quiet. We had a good time. *Laughs*

Aja: That was cool. We got back to him and I just having fun spending evenings in the studio and laughing and just being able to be free. Just the act of falling asleep in the studio, that was huge. When you have a little baby, you can’t just fall asleep.

Fatin: The label is here! We didn’t have fall asleep in the studio at all. We worked all the way through. *Laughs*

Aja: Working into the wee hours of the night is much easier when you have a babysitter who comes in and the kids are already asleep. At least you have until 6 am.

YouKnowIGotSoul: This album has fewer guests than your previous albums. Was that done by design?

Fatin: Even in starting to make the last album, it wasn’t necessarily something like “This is the album we’re going to get all the features”. It didn’t happen that way.

Aja: There were people in our lives.

Fatin: It made sense to put them on the songs and it just kind of happened. This one was the same thing. It wasn’t something like “This is going to be the record we don’t have any guests on it”. It wasn’t like that as well. Every time was just a natural progression and we do what feels good and what we like. If you need assistance or want someone to be on something, that’s always available to an artist. It may not be the person you want, but you can always get somebody else on the record. Chill Moody is on the record, he’s a young emcee out of Philly. He’s really making a name for himself. We see a lot of ourselves in him and on the grind. He’s out there making a name for himself and building a fanbase. That’s a familiar story to us and we love that story. We’ve always been there to support other people. Not just emcees, but singers and actors. On our first record, Jazmine Sullivan was one of the first artists we brought attention to. That way, we can bring somebody along who people are going to find out for the first time. That’s always a cool thing. Of course the single with Valerie Simpson on the title track was also a natural progression. Ashford Simpson was supposed to be on our last CD, but due to the sickness of Mr. Ashford, he wasn’t able to be a part of it. He eventually would pass away. Since that time, we built a better relationship with Ms. Val and when we working on the record, “A Couple Friends” just felt like something that would be a nice conclusion with her on the keys. It just finished up the record.

Aja: It just felt like a classy choice. When you put people on records, you want it to feel like a good choice. You don’t want it to be like “Oh we put this person on here”. I have a thing about collabs that I hate when it feels like that. I hate when I listen a collaboration that they just pull somebody from the sky. I like it when it’s pulled together like “This song wouldn’t be this song if that element wasn’t there”.

YouKnowIGotSoul: What is your chemistry like in the studio? I know it’s a different dynamic because you guys are an actual couple.

Fatin: I don’t know if she’s noticed, but over time, I’ve stopped being as involved when she’s in the vocal booth because she doesn’t like it. I come from already being a writer and producer, I noticed it but I also feel like it makes sense. I watched her own growth on her own and being in the booth and what she does. I don’t necessarily need to be there to bounce off of or to give ideas. That’s worked for both of us. Sometimes it’s a situation where she’ll go in the studio and I’m not there then I’ll go in the studio and she’s not there. Then we come together and then we listen to what we’ve done and putting all the finishing touches on what we’ve done. It’s a good rhythm. We finally found that good rhythm. We used to talk about it like a basketball team. When you put two good stars on the team, but they haven’t really played together. In the beginning, that’s kind of how it was. We both knew how to shoot, dribble and take the ball to the hole but we didn’t know how to play together. Now we’ve won championships together now. We’ve played 5-6 championship games together now. I know when to do things now and she does it too.

Aja: I think when he’s working alone, I think he kind of shines with the creative part. I feel like when I’m alone, I shine with the execution. When he’s in the studio without me, he usually can come up with a lot of ideas. When I come back, he’ll have a hook here or a bridge here. He’ll come up with really great ideas. Usually when I’m in the studio alone, I’m not really creating. I’m usually just executing. A lot of times, I’ll will have cut the vocals to everything. It works out.

Fatin: We’re parents too, so it’s occasional times where we have to tag team. Somebody has to be here and someone has to be there. We can’t always be in the same exact place at the exact same time except for when we’re on stage. It just works out and it’s a good thing that it does.

YouKnowIGotSoul: You guys have been successful for over a decade now. Has your motivation changed for making music over the years?

Aja: I would probably say no. Our motivation for making music has always been the same. Most artists will tell you the same. The music business is tough and you have to consistently motivate yourself and give yourself pep talks. Sometimes you’ll have to consider why you’re doing it. I will have to say, if I had to be raw and honest, the hardest thing for us has been when the music was very tough. The family dynamic does make it very difficult.

YouKnowIGotSoul: Anything you guys want to add?

Aja: Buy the album. Buy two copies. The album is out June 10th.

Fatin: Thank you for the support. Spread the love, hope and messages to as many people as we possibly can and hopefully our music will be here long after we’re gone.