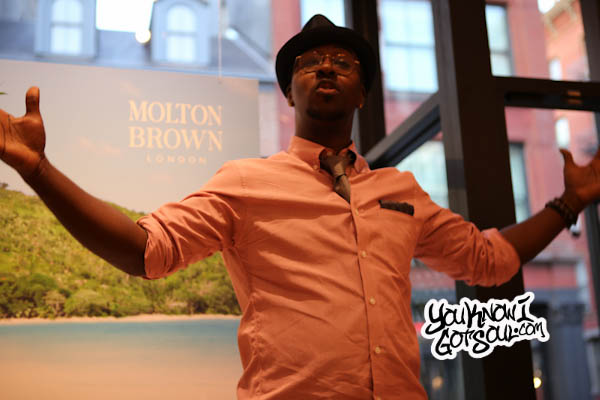 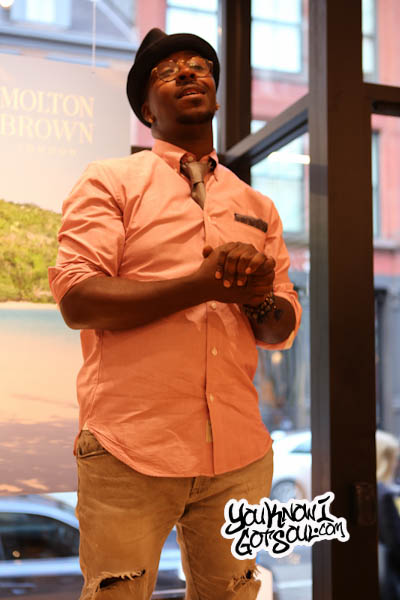 You might remember Kwame from the golden era of hip hop during the late 80’s and early 90’s when he experienced a lot of success as a rapper. Eventually as hip-hop turned to a more hardcore sound, Kwame faded from the scene and eventually re-emerged years later as a successful producer across all genres. Now the owner of his own independent label Make Noise!!!!, he’s helping to craft a unique sound that you won’t hear anywhere else today. One of the primary artists he’s working with is Atlantic recording artist Lauriana Mae, and we got a chance to catch up with him while he introduced her at her first headlining concert in NYC. Kwame talked to us about the sound he’s helping to craft for Lauriana Mae, what it’s like working with her, transitioning from rapper to producer, and producing Tweet’s “Turn the Lights Off” and JoJo’s “Breezy”.

YouKnowIGotSoul: Talk about how you originally met Lauriana Mae and what it’s been like working with her.

Kwame: How I met Lauriana Mae was crazy. She was running with another label at the time and they brought her to me and she didn’t really have a sound. Her sound wasn’t really developed yet. She came in and she looked at me and she was like “Ok what does this guy have to offer?” So we just started talking about what her influence was and the first person she brought up was an artist named Ruth Brown. So I said “Check this out” and I played this record I did that had a Ruth Brown inspired sample. She was like “Damn, you get down like that?” It was like this whole sound, this whole jazz/hip-hop/swing/beat box era in my mind and the stuff that I was producing, but I had nobody to give it to. So when I first played her the Ruth Brown type record, she thought it was crazy, and I played her more records and more records, and she was like “This is everything that I’ve been looking for!” Me hearing her, I was like “Yo, you’re everything that I’ve been looking for! This matches!” So we just started meeting and making records and the situation she was with dissolved and it was crazy because everybody who was down with her when she had that situation disappeared. It was me and her and a handful of other people and we just started rocking out. We started building on the sound. The first record we cut was a record she performed and is on the “Love Mae” EP called “Love”. That was the first record and she had me building from that sound. Everything from then fell into place; how we dress, how we carry ourselves when we’re out, we represent that sound. Tonight was a culmination of two years of hard work and creating that vibe.

YouKnowIGotSoul: What have music fans reactions been to this sound you’ve been creating with her and crafting with her for these past couple of years?

Kwame: It’s funny, for lack of a better term, people hearing it go “What the fuck is this!” It’s like is it r&b? Is it hip hop? We’re not trying to be any of that. Musically I want to give people that feeling that they heard when they first heard a Ray Charles or an Etta James, like “What the hell is this!” Hopefully give you an alternative to a lot of the sounds that you hear that are out now. For the most part, and nothing against the sounds that you hear now, but a lot of people just follow suit and follow each other in a cyclical motion that you hear in a lot of music. For us, we just want to feel like we’re leaders or doing something new and feeling brand new in the studio. It’s not like where you have certain artists that call it renaissance music and make music that they want to sound like the 60’s or the 70’s. We’re not trying to recreate all of those sounds, we’re trying to infuse the soul of a certain time period from the 40’s to the 60’s into hip-hop and something that bangs out. You’re not going to really hear for example Amy Winehouse type records with 808’s smacking you in the head. You’re not going to hear scratches. We’re trying to put all of that together and I think we’re doing a pretty good job of that.

YouKnowIGotSoul: Talk about yourself as a producer because I know you started out as a hip-hop artist and transitioned to a producer. How was that transition for you?

Kwame: For me, I started out in 1989, I was 16 years old, myself I was also signed to Atlantic Records. Pretty much I was a hip-hop artist, but my style of music pretty much got played out. The 90’s came along and it was a harder edge style of music, and I was left with the choice of doing two things, I could become an old school rapper and a statistic, or do what I feel I’m supposed to do and that’s music. It took some years and people weren’t really checking for me for some time, then I just started getting placements after awhile. It started in 2000, I got Mary J. Blige and then LL Cool J and then Dru Hill and then Chingy and Lloyd Banks. Then I had a number one pop record for Will Smith with “Switch” and then did records with Christina Aguilera and The Pussycat Dolls and Keyshia Cole and underground records for Talib Kweli. I started doing movie scores; I got nominated for an Emmy for a movie that I did on HBO called “Dancing in September”. Then I did music for “Drumline” and “Stomp the Yard” and “Fantastic Four”, a whole host of different movies, “Step Up 1”, “Step Up 2”. Just honing my craft because at the end of the day I want people to know me as a musician. I don’t people to know me as a rapper or a hip hop producer or an r&b producer or a pop producer, I just want to make sure that I cover all genres and I’m trying to bring that all to a head with this sound that I developed for Lauriana Mae. I’m very passionate about it and I’m very passionate about what I do.

YouKnowIGotSoul: What do you remember most about producing Tweet’s “Turn the Lights Off”?

Kwame: “Turn the Lights Off” was weird because when I produced that record…I remember exactly where I was. There’s certain special records where you remember exactly where you are, what you were doing at that exact moment. I lived in this one bedroom, sixth floor walkup in Harlem and I was young and trying to get back on my feet. I was making this beat and I was banging the shit out of this beat. The walls were really thin, and I’m beating this beat up, and I remember my next door neighbor, his name was Wilson, he came knocking on the door “This is Wilson, that beat is hot, but it’s shaking the fucking pictures off my wall, turn that shit down!” It was funny, I sent it out to so many people, so many people wanted that beat. I remember Styles P did a record off of that beat, 50 Cent did a record off of that beat, I can’t remember who else, it was a bunch of people. I think Jay-Z did a beat off of that beat if I’m not mistaken. We did a couple of records that never came out and I think that was one of the records. Then I got a call from Missy, she hit me and she was like “Yo I just made the craziest record off of that beat.” So I was like “Yo let me know when you want me to come to the studio and track it out and lay it down” and she’s like “Nah kid, we used that right off of the CD!” That shit was never mixed down, it was never laid out, it was never mastered. It was from my CD to Tweet’s vocals to the master of that album. That was when I knew that I kinda had something going because I was making these records and putting them straight on CD and not going through all of the motions of tracking out and stuff. Another record like that was this record I did for Fantasia called “Not the Way That I Do” and that record was straight off of the CD. A lot of records have come out that way. Shout out to Wilson for giving me the OK that my beat was hot, sorry for knocking your pictures off of the wall homey, hope you’ve got some new pictures on the wall!

YouKnowIGotSoul: What do you remember about producing JoJo’s “Breezy”?

YouKnowIGotSoul: What else are you currently working on?

Kwame: Currently, the name of our movement is called Make Noise. I’m like the band leader, I’m like the hip hop Duke Ellington of the thing. The first artist that’s coming with this sound is Lauriana Mae. We have another artist, a male rapper out of Queens named Beyond Belief, I’m working on his project now. He’s going to be another artist that has that sound. I can loosely say that I’m working on a project but it’s more of a project that’s showcasing that sound. When I do these live shows, when I get on stage I be on there with my four piece horn set, my keyboardist, my drummer, my string section, my upright base player, me on my MPC and my contraptions that I come up with in the studio. We’re just trying to bring a new sound and make things thump the way that we feel like they should be thumping.