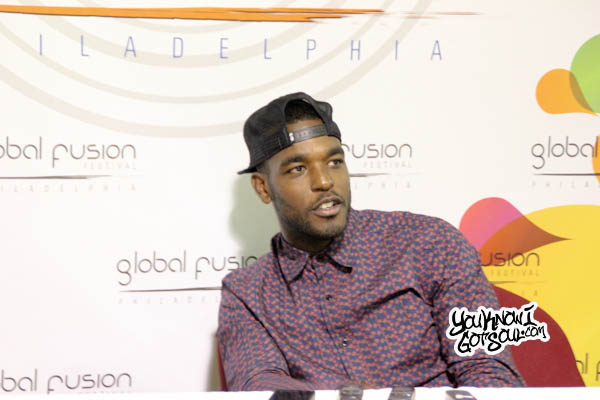 A couple of months ago when we were out in Philly covering the Rhapsody Global Fusion Festival, we got a chance to ask Luke James a few questions during the media press conferences prior to his performance. You can get a great introduction to Luke James by checking out our first interview with him from last year, but we’re sure you know about him already as his buzz has really picked up over the last year. During the press conference, we discussed with him his growth over the past year, working with producer Danja, and writing for other artists.

YouKnowIGotSoul: Since you’ve come out, you’ve been doing a lot of shows, you opened for Beyonce in Atlantic City, you did the Essence Music Festival. You’ve been building your profile as an artist. Talk about the growth you’ve experienced.

Luke James: The growth that I’ve experienced over that time is how to interact with the crowd, being more comfortable. I’m scared to death to get up on stage every time because I have that split second where I could say “I’m not going to do this.” Each time is like a goal I’ve reached by getting up on stage. I’m not getting over it and I don’t think I ever want to get over it because I perform like I’m scared, I don’t want to fail. I wanted to channel that.

YouKnowIGotSoul: Talk about your work with producer Danja who is the head of your label. Is he giving you concepts first and you’re writing to it?

Luke James: Working with Danja is a little of both. He gives me some art or I’ll bring him some art. “I Want You” I started as an acapella, I did the beat vocally. That’s actually how I do a lot of my songs if I don’t have music. I’ll bring it to Danja or Kadis and Sean and they’ll build music around it. That’s kinda how I work with anything. There’s nothing forced, it’s all feeling. The moment I start thinking is the moment it all goes wrong.

YouKnowIGotSoul: We know you do writing for other artists as well, you had a song on Tank’s album recently. Who else have you been working with recently?

Luke James: I’ve worked with plenty of artists, but my managers hate it so I haven’t been working with anybody. It’s tough being a writer and being an artist, it’s an energy. You’ve got to channel your energy to that person’s feelings and also what’s going on in your world and make your album dope. Also I really just want to focus on myself, this is my only shot, I want to give 100%. I did something on Melanie Fiona’s album and Tank was the last thing that I’ve done. I’ve got some songs out there, we’ll see if the artists end up using them.