Mint Condition – Telling the Stories of Their Lives (Exclusive Interview) 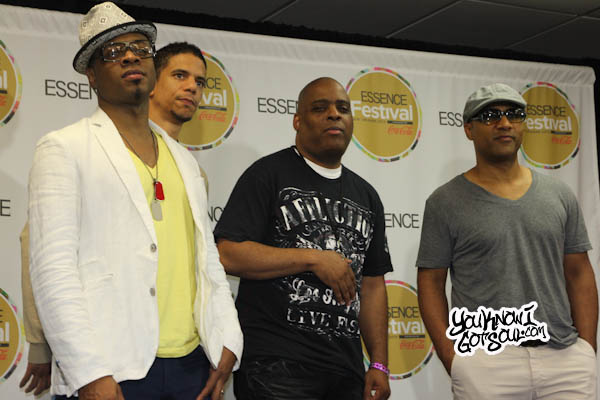 Sometimes you’ll find as artists and groups get deeper in their careers, the hunger that was there originally to create good music fades, they turn to outside writers/producers for help and it ends up being reflected in their music. Quite the opposite is the case with Mint Condition. Even after being in the music industry for over two decades now, their hunger is present as ever. Having the unique situation of being an r&b band who organically creates music from scratch, including producing and writing their tracks, they’ve always controlled the quality of their music. In fact, from the sounds of it, the group won’t be slowing down anytime soon. A group made up of five members, they can’t fit all of their stories on each album, and each of them can’t wait for their turn to share their life experiences. YouKnowIGotSoul sat down with the group prior to a recent performance at BB Kings in NYC. We discussed their new album “Music @ The Speed of Life”, motivation to keep creating good music, songs on the album telling their real life stories, the challenges in keeping their music current, and much more.

YouKnowIGotSoul: You just released your new album “Music @ The Speed of Life”. Introduce us to it.

Mint Condition (Larry): Well “Music @ The Speed of Life” is a CD that was recorded in real time, thus the name. It’s basically as we were going through our experiences and life and challenges and everything. If you met a girl and got close with her, that would be in the music in the morning, and then if you broke up with her, that would be the music in the afternoon. As life was happening, we were recording and it’s representative of our influences in music. In the Midwest, there wasn’t a lot of urban radio, so basically the stations played everything. When we were growing up, it would be from Stevie Wonder to Queen, the whole gamut was on the station, so we were influenced by all of that. Not to mention some world music like reggae, calypso, and all of that went into it. This CD really gives you everything. We didn’t run from that or try to water it down to some kind of commercial thing here. It just comes out giving the breadth of what we are as musicians.

YouKnowIGotSoul: You guys released the album “7” last year. What kinda motivated you to get right back at it with this album this year?

Mint Condition (Jeffrey): I think in the past, one of the older ways of doing business was coming out with records every two or three years. But now, we’re finding out that even our audience that’s grown with us over the years, their appetite is more so in line with the younger folks; they want some new stuff in a timely manner. We just figured we’d build on that momentum from “7”, it did very well and got a Grammy nomination, we toured with Prince, we set up a TV show on TV One, and we just thought we’d ride along on that success and put some new product out as soon as possible. It’s worked out well for us.

YouKnowIGotSoul: You mentioned the appetite of your fan base. Do you feel at this point you’re content just satisfying them, or do you feel like you’re always trying to reach new fans at the same time?

Mint Condition (Jeffrey): As artists, we’re always looking to grow as artists. However, you have to kinda pay attention to your regular clientele and give them kinda what they want. From what we’ve seen over the years, they kinda tend to gravitate more to our power ballads. We always have some songs on there that kinda are on the left and are little different.

Mint Condition (Larry): Our fans have come to expect [certain things]. We have come out where they have asked for more stuff that is edgy or to the left. For us, it’s a great thing because we’re not pigeonholed too much where they expect our style. Whether they love them or not, those are typically the songs for us in the past that have blown up more so. But when they come to see us, they want to hear our full gamut, whether it be alternative or funk, they want to see it.

YouKnowIGotSoul: You’ve got the lead single “Believe in Us” out now. Talk about the creation of the song.

Mint Condition (Ricky): It just came from a conversation I was having with a young lady in the kitchen. We were talking about a bunch of different things. We were talking about us possibly being together, we were talking about the way I looked at her and viewed her a certain way. Where the verse came from is she mentioned that her ex told her the same thing. I was like “This is real, everything I’m telling you” and it is. We got to talking about religion and she had her own twist on God. We were going to eat, and I said “Let’s say a prayer” and she was like “I don’t pray before I eat”. It was just real cocky the way she came off, like she was too good. She has her own belief in the way God is and that’s where the lyrics came from, “Could you believe in God like I believe in God”.

YouKnowIGotSoul: Do you feel like the rest of the songs on the album came from real life stories like that?

YouKnowIGotSoul: Talk about some of the collaborations on the album. You’ve got Jazzy Jeff and Brother Ali on there. How did those come together?

Mint Condition (Ricky): The track that Jazzy Jeff is on, “Girl of My Life”, I had that track a long time ago. We were touring with Jazzy Jeff and Jill Scott and Anthony Hamilton so I knew back then that I wanted him on that track, I saw him on that track. So we gave him a call and got him on it. “SixFortyNineChanges”, Jeff was working on the track and I suggested Brother Ali and he did like the best verse, I don’t think anybody could have come down and done a better job. It’s like we could have got the 10 best dudes, I don’t think anybody could have touched it like that. There’s a gentleman named Bobby Ross, he produced for Usher with Jimmy Jam and Terry Lewis, we also got, he did the talkbox for us.

YouKnowIGotSoul: You guys have had success at this for over 2 decades now. Has it been a challenge to keep your music evolving and current sounding, or has it been a natural progression?

Mint Condition (Jeffrey): Each of us to a different degree keeps our ear to the streets and pays attention to what the younger sector is doing. A lot of the hip hop and alternative and the younger groups now are like a hodgepodge of everything. It’s natural for us to kinda listen to what’s going on along with the music and technology. We’ve got to keep up with that as well.

YouKnowIGotSoul: It’s probably not a fair question, but with the way consumer preferences are changing, do you feel like if you guys were a young Mint Condition coming out for the first time today, would have a hard time finding success?

Mint Condition (Jeffrey): I think we’d be right in there!

Mint Condition (Larry): When we first started, things were a little bit homogenous so to speak. Every r&b group sounded like r&b. Now, do you even have r&b now? It’s almost like it’s all mixed in. Like what we are is kinda like hybrid music with everything, or we say gumbo. I think we’d fit in. I think it’s that shock value of when you first come out as someone different and I think then they get used to you and they’re looking for the next chapter. I think we’d definitely provide the shock value today.

Mint Condition (Jeffrey): I think we could release “Pretty Brown Eyes” today and I think it would do well. Maybe we’d tweak it, but as is for the most part, we can release that today.

YouKnowIGotSoul: With all of your guys time spent in this industry, how do you stay motivated to keep making good music? I know with a lot of artists, they tend to lose motivation and turn to outside writers and producers. You guys do it all organically.

Mint Condition (Homer): We can only release so many records. We’re all fighting for space on the CD to tell our story or what we’re feeling that year. Maybe like two years, one person might be carrying the torch because he’s got so much to stay. The next year, it might be the next person. There’s so many tracks that everybody here is sitting on that we haven’t released that we all hold to ourselves that we don’t want to give to anybody else because we’re just waiting for that time. It’s like Prince sitting on 20 CDs! It’s spread out over the five of us, it goes around. It’s so much that we want to say and do. If we could do it in a year’s time, it will be crazy. There’s so much everybody here wants to say musically, that we’re just waiting our turn. It’s going to carry us for awhile.

YouKnowIGotSoul: So I guess you guys have no plans on slowing down anytime soon!

YouKnowIGotSoul: As you’ve been on this journey and seen your fans along the way evolve with you, have they been with you right there the whole way?

Mint Condition (Homer): Some of the best fans ever! People always talk about their fans being great, well our fans have held us down without a single on radio, without a CD in the stores. Pretty much every show we do around the world is sold out without a CD. When a CD comes out, it gives them something what they’ve been looking for. The best fans, they really give us a lot of support. We just introduced some t-shirts and a line of stuff on our website and it’s just been selling so well. Our fans are really great and are supportive. Every time we release something, they are already waiting for the next thing. We’ve got a great fan base.

Mint Condition (Ricky): Find out where we’re going to be at and what we’re doing at MintConditionMusic.com. Our Facebook and Twitter are on there too. Find us.