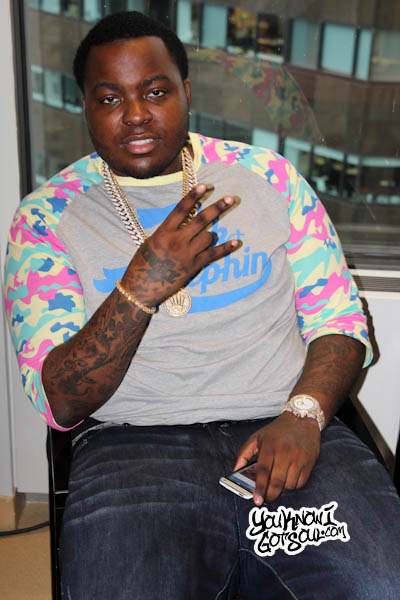 The jet ski accident that Sean Kingston was in did more than almost take his life, it gave him an all new perspective on how to live life to the fullest. As he prepares to release his new album, aptly titled “Back 2 Life”, the passion he possesses for feeling good about life will surely be reflected. Since linking up with producer J.R. Rotem years ago, he’s given us infectious hits such as “Beautiful Girls”, “Take You There”, and “Fire Burning”, along with collaborations from the biggest names in hip hop and rnb. “Back 2 Life” will represent the next chapter in his life, and he’s very excited to share it with us. YouKnowIGotSoul sat down with Sean Kingston and discussed what to expect on the new album, infusing the Jamaica culture back into his music, why so many big name artists want to work with him, his life changing accident, and more.

YouKnowIGotSoul: You’re gearing up for the release of your new album “Back 2 Life”. Talk about the fresh new sound you developed for it.

Sean Kingston: I wouldn’t say a fresh new sound, but it’s just what Sean Kingston had built before, but taking everything to the next level. I feel like when I came onto the industry, I brought a sound that was a mixture of Reggae, Pop and all of these different fusions in one. I felt like on the second album we lost that a little bit. I feel I’ve brought it back now. That’s why the album is called “Back 2 Life”. I’ve been through a lot and I think I’m at a point where I got a great body of work and I feel like once the world hears the music, they’re going to the love the album. There’s music on there for everyone and they can play it from top to bottom. It’s just a feel good album.

YouKnowIGotSoul: With your expanding your songwriting on this project, has it become your most personal project to date?

Sean Kingston: Yeah, I write most of my music. I write like 90% of my music. Since “Sean Kingston” came out, most of the songs have been written by me. I like to, but I try not to collaborate with other writers because I’ve done stuff already that have been big, so I feel like if you can do it once you can do it again. I went into that chemistry and zone. I locked myself in on creating a good project and that’s what I did. I have a younger producer named Nic Nac that I found in LA. We just went in. J.R. Rotem is on the album, RedOne is on the album. it’s definitely some fire so I’m excited.

YouKnowIGotSoul: You’ve said that this is your most passionate and inspired work to date, so what has inspired you that will show on this project?

Sean Kingston: Just different situations maybe with women, everyday life as far as people thinking money is happiness. It’s not all that. Sometimes you see Billionaires who are the richest people who are not happy and they’re lonely. I tend to escape and find other solutions or other things. I don’t base it off jewelry or stuff like that. I want to do music that I want to do from the heart and be passionate about. I feel like this is what this album is. It’s everything Sean Kingston wanted. I went to Jamaica and I went there with my producers for two weeks. We vibed out and got that energy going.

YouKnowIGotSoul: I know you wanted to get back to your culture and have it reflected in your music. How will that sound come out in your music?

Sean Kingston: “How We Survive” with Busta Rhymes is a song the islands will be going crazy for. We’re shooting the video and do it the right way. My second album, people were like “Yo you’re Jamaican!” That’s where I’m from and both of my parents are fully-blooded Jamaican. It’s like “How do you forget that bridge of the gap? You have to keep that in there.” When you hear Kingston, that’s the capital of Jamaica. That’s what separates me from a lot of these artists is the fact that I am Jamaican and I can do different types of music and I’m versatile. I have to put that in there to give them something edgy and that’s what I did. I’m excited.

YouKnowIGotSoul: You’ve got some big name collaborations on this album. You’ve always collaborated with artists throughout your career. What do you think it is about your artistry that makes people want to work with you?

Sean Kingston: It’s what I’ve done, but not only that, I feel like it’s just me as a person. I’m easy to get along with and I don’t complain about much. I’m really chill and I’ll just be in my zone. I’m really relaxed. People want to work with people that are easy going. So for me, if you send a beat you’ll get a hook right back. I’m glad I built up a reputation in this industry that’s pretty good. That way I can call anybody and get a favor if I need one.

YouKnowIGotSoul: After your last album, you released a few singles over the years but you ended up scrapping those and started fresh for this new album. Why did you scrap those singles?

Sean Kingston: It wasn’t me. When you have songs that I wrote like “Eenie Meenie” with Justin Bieber, “What You Say” by Jason Derulo and “Replay” by Iyaz, those songs were big records, but I felt like with this project, those songs wouldn’t fit. This project, I needed to go back to what I was known for which is bringing back feel good vibe and mixing the Reggae with Hip Hop and Pop and creating my own fusion. That’s what I went back to. I feel like the stuff I was doing before, it was cool but that wasn’t the direction I wanted to go in. I wanted to stay true to myself and a lot of artists get caught up in that because they listen to the label or this person and they don’t do stuff from the heart. If you don’t project from your heart and it doesn’t work, you can’t blame anybody. You can’t be like “You did this Sony!” Sony is going to hang up the phone on you, they have 30 different artists. You have to care for yourself and do what you gotta do as an artist and follow your heart. If it doesn’t work, it doesn’t work. There’s nobody to be blamed. That’s just the position I’m in.

YouKnowIGotSoul: Of course you went through the jet-ski accident. What did you take from that in terms of getting past that tough situation?

Sean Kingston: I learned that no matter who you may think you are, you have to live life a certain way. You have to keep your eyes open, you have to be safe and you have to be cautious. You have to live everyday because you never know what may happen. You have to live everyday to the fullest, but you have to be safe because you never know what would happen. I was just caught up in the hype of being young and wilding out. There were all these girls at a pool party and I was just vibing. I went on a jet-ski and I wasn’t drunk. I was actually 100% sober and an accident happened. I couldn’t have prevented it, but it just happened. That’s why now, I feel like since then, I’m more relaxed and down to earth. Nothing really bothers me now because that was a life changing experience.

YouKnowIGotSoul: Take us back to your early ages. I was reading that you were grinding since the age of 11 and just trying to be an artist. Take us back to those times and what that situation was like.

Sean Kingston: It was hard coming up in Miami and really trying to come up with that sound. Everybody was all cliqued up together. You had Rick Ross over here, DJ Khaled over there, Slip-n-Slide Records with Trina and Trick Daddy. Everyone was all in groups. I was like “I have to break, this is what I need to do.” I knew I was going to make it, nobody was going to tell me I wasn’t going to. I was like “How am I going to get in this industry” because I felt like I couldn’t do it as I wanted to in Miami, so I moved to LA. That was the stomping ground for me and that’s where everything took off.

YouKnowIGotSoul: How did you originally link up with J.R. Rotem?

Sean Kingston: Basically it was all MySpace. I put these 4 songs on my page and these were demos. I printed out 1500 copies of the songs with my own money. I was going around to everywhere I could give the CDs to people’s hands and I wasn’t getting the response I was getting for. I gave my demo to Snoop, Lil Jon and all of these people. I don’t know if I listened to them or not, but I felt like I had great music on there. I was like “Why isn’t anybody listening?” Little did I know it, when the time was right, I checked my e-mail one day and J.R.’s brother messaged me with “We love your music. We want to meet with you.” I was like “This is crazy!” because I was hitting J.R. on MySpace everyday. For him to hit me back with “We love your music”, that was big for me.

YouKnowIGotSoul: I come across so many artists who were in the position that you were in and just trying to make it. Coming from someone who was in that position to selling millions of records, what does it take to make it to the next level?

Sean Kingston: To make it the next level, you can never let anyone shoot down your dreams. You have to stay determined, focused and go after what you know. Don’t let anyone tell you any different. If you believe in yourself, people will. If you don’t believe in yourself, no one will. You have to have that mindset that you’re untouchable. Whether you’re black, white, tall or short, you have to go say “I’m the hottest person in the room. I don’t give a damn who is in the room!”

Sean Kingston: Make sure you get the album “Back 2 Life” on September 10th. Hit me on Twitter @SeanKingston.