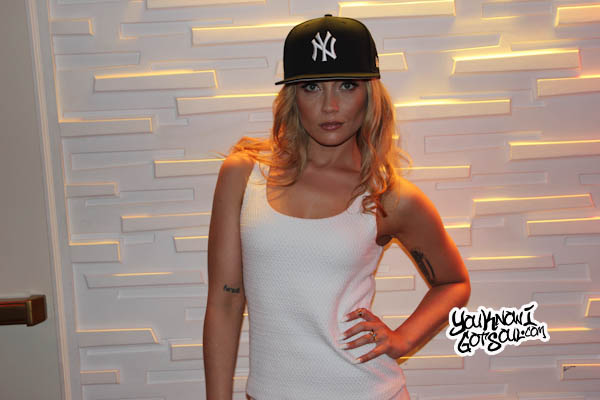 Singers that rap, and rappers that sing, we’ve had a few talented ones of those before. However, it seems like there’s been a serious void left behind since Lauryn Hill released her debut, won every award, and then stopped creating. The “New Motown” seems like a perfect spot to house this type of talent, and we’re starting to see what they saw when they signed Stori. With a wide range of eclectic influences, it’s hard to classify her music in just one genre. It’s something you have to listen to for yourself to really appreciate. She’s given us both sides of the spectrum so far with singles like “Jump Off to Lovers” and “Pocketbook” so we know she has the versatility to catch on comfortably in the mainstream. YouKnowIGotSoul sat down with her after a recent performance in NYC and discussed her influences, how she was originally discovered by Motown, developing skills in rapping and singing, and much more.

YouKnowIGotSoul: Growing up, who were some of your influences?

Stori: Definitely Stevie Wonder, Prince, The Beatles, Lauryn Hill, Biggie, Nas, Jay-Z. It’s really a huge pile of a bunch of shit, but those are a few.

YouKnowIGotSoul: When did you know you wanted to do singing for a career?

Stori: As long as I can pretty much remember. There was never a fall back or plan B. I actually saw Mariah do some show somewhere and I was like “I want to do that!” Everything kind of fell in place and I couldn’t have planned it any other way.

YouKnowIGotSoul: On some songs you’ve performed, I noticed you rap and you sing. How did you develop those skills?

Stori: You know what’s crazy? You know how people sing in the shower, but they don’t want anyone to know that they sing? I felt like I rapped in the shower and I didn’t want anyone to know. Isn’t that weird? *Laughs* I’ve been singing my whole life and I’ve always had a crazy love for Hip Hop. I would hear a song once and I would get a verse down like that. It was something that I loved to do so much, but I always kept it inside because I was like “I’m a singer.” After awhile, it was like “This sound is kind of cool” and people were digging it so it was just like “Do you.” It’s worked so far, so I’ll stick with it.

YouKnowIGotSoul: How did Motown discover you and sign you?

Stori: When I got with Next Day, we had done a few records together and I actually put up maybe the 5 millionth Adele cover of “Someone Like You” online. There were a billion like them out there and then we threw out an early version of “Just Another Day”. It felt like a couple of weeks that we had every major label knocking on our door. It was just crazy how fast it was and with all the meetings and all the considerations we had, it just worked out with Motown and with my background being put onto Motown from a really young age by my parents, I thought it was just meant to be type stuff. I was like “This is it!”

YouKnowIGotSoul: I believe you’re working on a mixtape as well?

YouKnowIGotSoul: Who have you been working with?

Stori: Well I’ve worked with Rock City, Mike Will, Chase N. Cashe and a lot of the new producers who aren’t really known. It’s really about finding who the best for this situation is. If you have a dope name and all that, that’s a bonus. We got those two, shout out to Mike Will and Rock City.

YouKnowIGotSoul: You have a really unique style with the rapping and the singing. Do you think you’ll fit in more with the R&B or the Hip Hop side?

Stori: I don’t know, I really hope it isn’t an either or type of situation. I hope that if you like Hip Hop at all, you’re going to like what I’m doing. If you like melodic things, hopefully you’ll like what I’m doing. I don’t want it to just be like “Oh we have the Hip Hop people over here who will like tracks 3-7 and the R&B fans to like songs 1, 2 and 10.” I would love for everyone else to feel it. It’s more based on feeling, so I really think it’s possible to live in both of worlds.

YouKnowIGotSoul: Which is more difficult for you: Writing a verse or writing an R&B song?