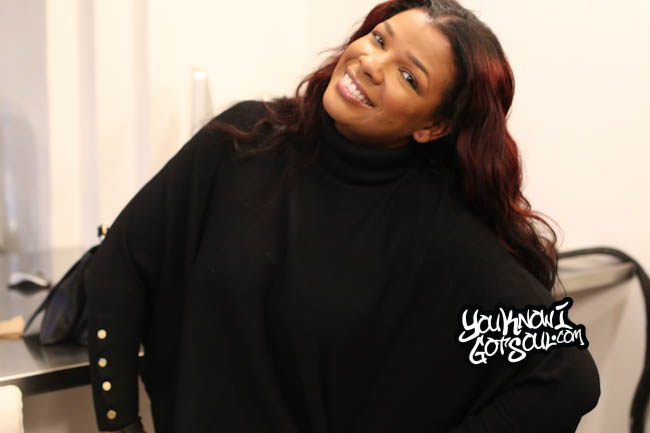 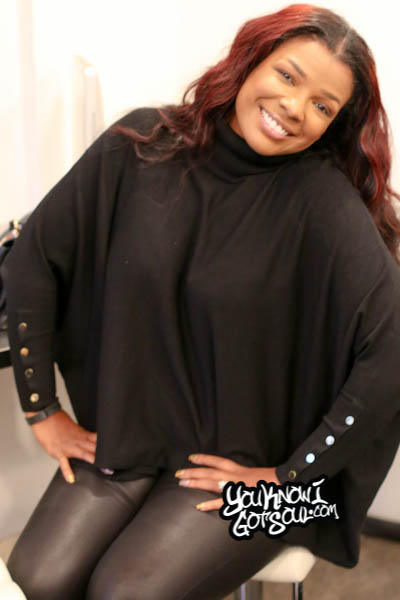 It’s not common for an artist to create their best work after over a decade in the industry, but Syleena Johnson has arguably done just that on her recently released “Chapter 6: Couple’s Therapy” album. Don’t just take my word for it, check out our writer Edd Bowser’s detailed review of the album which praises the quality. Sitting in on the press listening session for the album earlier in the year, we knew some good music was coming, and it’s exciting to see Syleena excelling at creating great r&b. Modeled after her life just like her previous Chapters, she dug deep this time in singing her heart out about the ups and downs with her husband. The most satisfying part is, she didn’t need her frequent collaborator R. Kelly to do it. YouKnowIGotSoul sat down with Syleena Johnson once again while she was in town promoting the album and discussed how she made this her best work, what influenced her, why she was unable to connect with R. Kelly, and much more.

YouKnowIGotSoul: The new album “Chapter 6: Couples Therapy” is coming out. Talk about the inspiration behind the album.

Syleena Johnson: The inspiration behind the album is, this time around it was my husband and I. The fact that we’ve been married for 7 years and we’ve been together for almost 10 years, we’ve held it together through everything. It hasn’t been easy and the point of me putting it into this album is the concept which is just to travel to a point where even though you go through a lot of stuff, you can still stick together. I want to let people to know that therapy is okay and it’s not for crazy people. Therapy is actually good and it’s a stress reliever. I have a therapist of my own and I go to couples therapy.

YouKnowIGotSoul: I feel like this is some of your best work and I know you’re proud of it. How proud are you of this album?

Syleena Johnson: It took me 2 years to get to this point. The way I got there, let me just say this, I just got tired of trying to figure out what to do to fit in with what’s going on. I didn’t do that and it’s not like I really did that a lot, but I did care about wanting to give someone everything. I know that my lane is R&B and I said, “I’m going to get in my lane and get in it”. It’s almost like going to the store to get some jeans and you could fit the size 6, but they’re tight as hell. If you just go down a size and get an 8, you’ll be able to put them on and you’re going to be so happy. That’s how getting into R&B was for me. It was just going into the vintage, authentic R&B and soul sound.

Syleena Johnson: I’ve been trying to work with Dave Hollister for many years. Our paths just never crossed properly which is weird because we’re both from Chicago. It was not that hard. It was weird because the stars just lined up. It’s the perfect record and he sounds perfect on it. The timing is amazing because he has an album out too. We’re trying to get together a House of Blues tour for the both of us. That would be so amazing because we’re both from Chicago. I’ve always wanted to work with him and he’s a great guy. Willie Taylor is a great friend of mine. Our kids play together. I just wanted people to know how talented he was. I know how talented he is beyond the pop stuff with Day26. He’s really a lot more than that as an artist, writing and producer. I wanted to work with him based on that. Leela is a great friend of mine. She has the same type of conflict in the industry that I do. Her voice is really distinct so it’s a double edged sword. We really get each other and she’s a great person. She’s an amazing performer and I’m really blessed to be able to work with her as well because she’s so awesome and different.

YouKnowIGotSoul: I know you tried to get R. Kelly on this album, but unfortunately it didn’t happen. Talk about that.

Syleena Johnson: Technically speaking, Robert was the executive producer on this album in the beginning. I had recorded 2 songs that he wrote. I was on my way to working with him, but then the business side came in and we didn’t see eye to eye. That’s how we were separated. It’s no hard feelings and we don’t hate each other. There’s no bad blood, but it’s just he was going in one direction and I was in another direction. We’re at the place now in the industry where we’ve both been in it for such a long time that we’re very confident in what it is that we want to do. I just think that this transition, although it was difficult because he’s such a great artist and it is a loss, but not too much because I worked with 2 of the most amazing producers in Pierre Medor and Kriss Johnson on this record. It narrow down to just those 2. I like to work with less because less is more. I don’t like a lot of producers on my record anyway. I think everything happens for a reason and it didn’t really matter too much.

YouKnowIGotSoul: Another song that stood out is “If You Need to Know”. Talk about that one.

Syleena Johnson: I wrote that record specifically based on what my husband and I deal with. Sometimes we get into real relationships and me and my husband have kids who are 3 and 7. You get so caught up in the day to day routine that you forget to be in love and romantic. You get to arguing and getting frustrated. That record was just to say, “Just in case you were wondering, I still want you”. The cool thing about that record is that I vocally produced and recorded it by myself. I just wanted to just sing. You have songs that you have to sing a certain way and chill, but this was a record that I wanted to just sing it and give that vintage feeling to it as well. I really love this record.

YouKnowIGotSoul: I know you shout a movie for this album yet. What’s the movie is about?

Syleena Johnson: The movie is the exact same concept as the album. The movie will take you through the visual part of what the album is saying. It’s like “Purple Rain” meets “Black Nativity”. It’s a full movie that’s 90 minutes with dialogue. It’s not like “Trapped in the Closet” at all. It’s not a musical like that, but it’s a full movie. I just got tired of the old style of doing a single and making a video. I think the public gets tired of that too specifically because television doesn’t have video anymore like it used to. Stuff like the countdowns, they don’t have that as much anymore. When they do, it’s so early that the kids are in school and no one sees it. You have to go to stuff to see video, which back in the day, there was MTV, BET and VH1. I think because television and social media are changing, we have to change too. We have to evolve as well, so I wanted to do something I hadn’t done before.

YouKnowIGotSoul: Being on R&B Divas and having that reality TV exposure, it’s given you a new promotional tool. Has that made you approach your music differently at all?

Syleena Johnson: No, it hasn’t changed the creative process. What it has done is create a bigger platform for the music. That’s about it. It’s also brought awareness to the Syleena Johnson brand which is awesome.

YouKnowIGotSoul: Where do you think your music career would be if you didn’t go the reality TV route? Do you think anything would be different?

Syleena Johnson: I probably would still be working and struggling hard because I think reality TV has almost become the new record deal. The visual was the one thing I really lacked from all the way in the beginning. When I signed with Jive records and before then, the visual is what I lacked. I never did many late night shows and it was basically videos where you only saw me. I was never on any award shows, so to be able to have R&B Divas was a huge blessing for the brand. It showed me visually and not only visually, it showed my personality. My fans were able to connect to me in a much bigger way. I’m very grateful for that and I’ll gladly utilize that platform for as long as they have me. I think it’s great that it was even thought of. I think Nicci Gilbert who was a co-creator of the show, actually she’s the full creator and had the idea herself. She added other people in after, but I think it was a great idea because at that point, we all had a pure want and need for the music. That’s what it was. Later on, it got tainted by different things and business, but still for me, it’s about the music. I did the politic stuff, so I don’t really care about that. What I care about is getting my music out there to the fans.