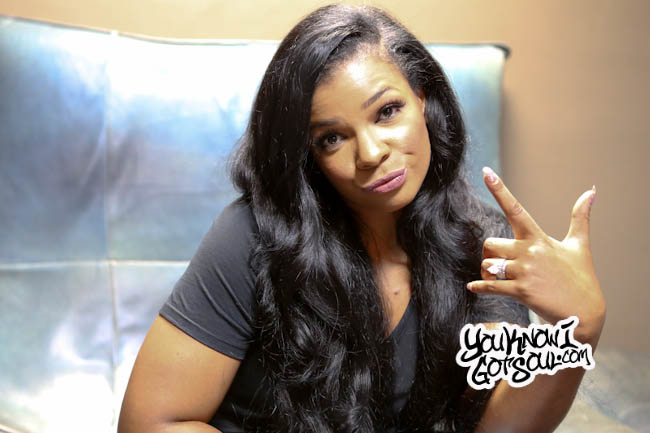 Syleena Johnson has experienced an amazing resurgence in her career over the past few years which is exciting to see since she’s always been an underrated powerhouse singer. Things started moving in the right direction following her appearance on R&B Divas and then following the release of possibly her best album, “Chapter VI: Couples Therapy”. Now she’s out on the road promoting the album on her “Couples Therapy” tour that she recently embarked on and getting the attention she deserves. YouKnowIGotSoul sat down with Syleena Johnson during a recent appearance in NYC and discussed what to expect on the tour, the “Harmony Challenge” that she launched, finishing her college degree, and more.

YouKnowIGotSoul: Talk about the “Couples Therapy” tour which you’ve recently started out on.

Syleena Johnson: I’m really excited to start the “Couples Therapy” tour. I’ve made some changes to my show. I have some new material and some old as well. I’m also incorporating some remake material to make it a lot more fun. I’m really excited for everyone to see the new show.

YouKnowIGotSoul: You’ve launched the “Harmony Challenge” as a way to add a unique element to your shows. What’s that all about?

Syleena Johnson: The “Harmony Challenge” is something I’m holding for men in the cities that I’m going in for the tour. Dave Hollister cannot join me in every city to sing the song with me, so I thought it would be really cool to have someone from that city sing the song with me. I got the idea actually from the New York winner. He inboxed me on Instagram and was like “I would love to sing the ‘Harmony’ song with you when you come to New York”. And he was like “You should hold a challenge for people in each city”. I was like “That’s a really good idea. You’re going to be the winner!” I pretty much got the idea from him and it’s been pretty successful. There have been some amazing submissions and so much talent out there. I’m excited to join the stage with different talent all across the US.

YouKnowIGotSoul: Talk about the momentum you’ve built following the release of your “Chapter VI” album and your appearance on R&B Divas.

Syleena Johnson: The tour is never ending. We’re at radio with the single second which is “Harmony”. It’s building and doing really well. It features Dave Hollister who is a really great guy and a great vocalist. We’re independent, so the beauty of being independent is that we can work an album for as long as we want. I just really love this album and we just want to ride it till the wheels fall off. There are so many amazing songs on the album. In addition to this tour, we’re doing a Grammy run for the album and we feel it’s strong enough to win a Grammy. Not just be nominated, but to win one. We’re just really blessed and excited to be able to still be out here pushing. The “Couples Therapy” movie will air a couple more times throughout the years. It’s with BET for 2 years. That’s awesome. Everything is still moving forwards and dates are still coming in for the tour. The dates that are out now, they aren’t the only dates. Those are just the starting 16 dates. There will be more throughout the time I’m performing. We’re excited because I get to back to South Africa. The last time I was there was 2005. I went to Johannesburg and it was unbelievable. I’m really excited to be going back this time. It’s an amazing show.

Syleena Johnson: I enrolled in college in 1994, so it’s taken forever for me to get my degree. I’ve been to 3 different colleges, 2 kids and 2 husbands. I just felt like I wanted my college degree. That’s why I started college in the first place. I never want to do anything and not finish it. I don’t want to leave stones unturned. I felt like it was a strong thing to do for my family and for my sons to see since both their parents are college graduates. That’s big especially in the African American home. I wanted to make sure that I took care of that and I may be going for my Masters when this all dies down. I’m really passionate about nutrition and health. It wasn’t easy. It was very hard doing homework and papers and being on the road. It was extremely hard and stressful, but it was worth it. I’ll do it all over again sooner, but I will finish. I’m glad things went this way because I was a music major at first and I’m glad I chose nutrition because I actually have a stronger passion for nutrition than the music that they teach music in school They don’t really teach R&B in school. I’m really proud of myself and I feel great I was able to accomplish that goal.

Syleena Johnson: I just want to encourage everyone to come out to the “Couple’s Therapy” tour. This is my first tour by myself. I’m headlining my own tour. There’s some stops I’ll be joining others, but basically this is my first tour. I’m really excited about it. I’ll be in New York August 28th at the Highline Ballroom.