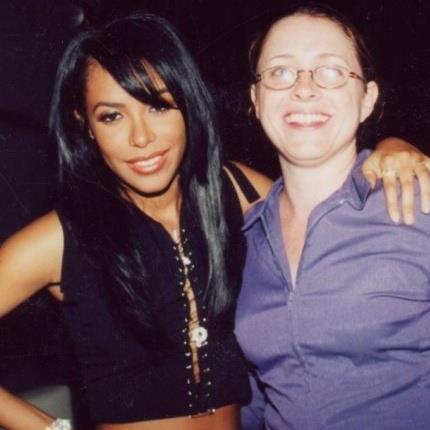 YouKnowIGotSoul had a chance to speak with former Blackground associate Michelle Cramer to talk about her memories shared with Aaliyah. Aside from being one of the most popular singers of her time, Aaliyah was also one of the most down to earth artists one could meet. In this interview, Michelle talks about Aaliyah’s impact on the world, her legacy and also gives some insight on Blackground Records.

YouKnowIGotSoul: How did you get your start with Blackground and what projects were they working on at the time?

Michelle Cramer: I started at Blackground in 1999. Aaliyah had finished “Romeo Must Die” and they were putting the album together. I was also doing A&R administration and pulling together the music as it was brought in through Barry Hankerson, Jomo Hankerson and the producers. I remember that was the main project we were working on at the time. It was a pretty big project because they had the track with DMX and there’s a Destiny’s Child song on there. I just remember dealing with a lot of the producers at the time that worked on the tracks. I think “Romeo Must Die” was the main project. They had signed Tank, but nothing had fully developed yet.

YouKnowIGotSoul: Talk about the transition from Atlantic Records to Virgin records for Blackground.

Michelle Cramer: When I started at Atlantic records, the “One in A Million” album was just coming out. I worked for an executive who did radio promotion and we just shipped “One In a Million” to radio and it was just starting to blow up on radio. Then she did “Are You That Somebody” off the Dr. Doolittle movie. Blackground people were often at Atlantic Records working on projects. Dr. Doolittle was a huge success, a lot of hits came out of that soundtrack and they had just put out the Timbaland & Magoo album. When she was on Atlantic and the “One In A Million” album came out, Blackground had dictated all the creative process to Atlantic, but I think when Blackground moved over to Virgin, they were allowed more independence. Atlantic was sort of like a partnership with Blackground and with Virgin, Blackground worked more autonomously as a record label. Blackground always maintained their creative direction with their artists.

YouKnowIGotSoul: Did Aaliyah portray herself as a role model for the younger generation?

Michelle Cramer: Absolutely and she took that role pretty seriously. She knew a lot of young girls were looking up to her as an example and I think you always saw that. That’s why people continued to be fans of her because she was a grounded young woman.

YouKnowIGotSoul: What are some memories you had with Aaliyah that you can share?

Michelle Cramer: A very intimate experience I had was when she turned 21, her mother was traveling and asked me to put together a little surprise birthday party for her. With the help of some of the producers, we lured her to the studio. Rashad was there with some of his friends, Timbaland and Missy were there. It was just her friends. I got her a pretty cake and she seemed genuinely surprised when she arrived. Everybody had a great time just hanging out and it was just like her style, it was very low key.

I also remember when the Aaliyah album was being released there was a release party in LA. It was a really nice event with a lot of her producers there. At one point she went to the entrance, I’m not sure why but I think to see fans who were hoping to get in. There was a young lady near the door and I remember Aaliyah opened the door, grabbed the arm of the young lady and said something like “Tweet, what are you doing outside?” and she pulled Tweet into the party. I had no idea who Tweet was at the time but obviously Aaliyah knew her and just did what any friend would do in that situation.

Lastly back when she did the video shoot for “We Need A Resolution” with the snake, the label wanted me to get her a python for an appearance on MTV. I had to run out to a pet store and get her a python and all the things she would need for the python to live. She was on TRL at the time, so she went on with the little snake around her hand. He was just a little python. She had the python for a little while, but it was a lot of responsibility, but she did have a pet python briefly from that MTV appearance.

YouKnowIGotSoul: What was the impact of Aaiyah’s death on Blackground?

Michelle Cramer: I’m not sure if it operated differently. I think there was definitely a sorrow at the office, but they continued to want to work and press on. They had some amazing artists brought to them such as JoJo and continued to develop these artists creatively.

YouKnowIGotSoul: What was the impact on fans?

Michelle Cramer: I remember at her funeral, I just couldn’t believe the amount of young women who were there to see her go. I really felt the impact that day. It was obvious how she affected young ladies and her fans.

Michelle Cramer: I don’t know if I should say this, but part of the reason I had to leave the music industry was because it was like a heartbreak you never really could recover. Being at the office, I just had to move on from there because I, at the time, couldn’t get over the loss. It was a very difficult decision for me to make because I always considered myself one of her biggest fans and to be connected to such an amazing artist in that kind of way, it was difficult to let go of that. I left Blackground in 2003.

YouKnowIGotSoul: What do you want to be seen done for Aaliyah’s legacy?

Michelle Cramer: I think about that a lot. For her fans, maybe some of her unreleased material could be released. A documentary or something like that would be good to carry on the legacy, As an entertainer I think she was an example to young women to not just become entertainers too, but to tone their craft and work hard like she did.