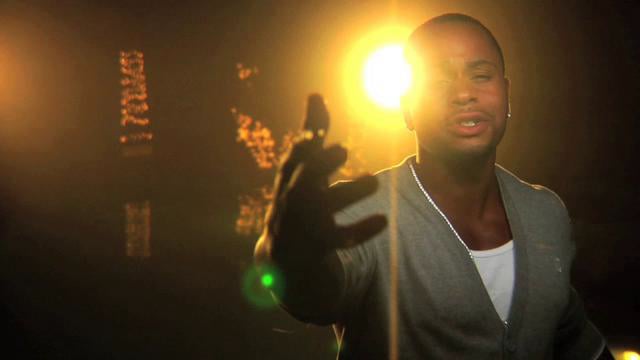 When your brother is global superstar John Legend, it’s not an easy task to escape the comparisons that will eventually come up. For Vaughn Anthony though, it’s never been about trying to emulate his brother’s style, but rather forge his own career based off of who he is and what he’s been through. When you listen to Vaughn’s music, you will hear similarities in the voice, but lyrics much edgier than you’d ever hear coming from John. Now as he prepares his first mixtape and debut album, he will get a chance to show the world just what he can do. YouKnowIGotSoul caught up with him to discuss his origins in music, how his music differs from his brother’s, his upcoming mixtape and album, and more.

YouKnowIGotSoul: Talk about your origins in music and when you knew you wanted to do music for a career?

Vaughn Anthony: My origins go back to my family. My mother and father sang in church. My grandmother played the guitar. I’ve got several uncles where we as a family would get together and sing around the piano. Then just growing up in the gospel arena. Back then I wasn’t interested in music, I was into sports and things like that, I was a basketball player, and also a ladies’ man. *Laughs*I was a hoop player/ladies man and I didn’t really start singing until I did a play in my church back in 2003 where I played Smokey Robinson. After I did that a lot of people had inspired me to start singing. Ever since then, I’ve been singing background and being a solo artist.

YouKnowIGotSoul: You mentioned you were heavily influenced by the church. Talk about that influence and how it’s had an impact on your music career.

Vaughn Anthony: I’ll say maybe the spiritual aspect has helped keep me grounded to a certain extent. I think the soulfulness has definitely been a part of the singer that I am today. That’s my roots, that’s where I come from, so it’s definitely played a big part.

YouKnowIGotSoul: Many know you as the younger brother of John Legend. For those who haven’t had a chance to listen to your music yet, how does your style compare to John’s?

Vaughn Anthony: I would say I’m more edgy, a little more blunt with it. I think that if John was singing about taking a woman’s underwear off, he’d say “I’m going to love you down like never before” and I would sing like “I’m taking your draws off right now!” *Laughs* I’m more straight to the point and he’s more lovey dovey with it.

YouKnowIGotSoul: With your brother being who he is, a superstar and a worldwide name, as you continue your career as a musician, are you ever concerned people will try to compare you guys a lot?

Vaughn Anthony: I keep it in mind because it’s always in my face. But at the same time, I’ve got to do me, I have to continue to be who I am as an artist. Those people that listen to my music and get what I’m trying to portray or what I’m trying to bring to the music industry, they’ll get it. Those who don’t, they don’t.

YouKnowIGotSoul: You have an upcoming mixtape coming out “Life of a Player”. What does the title mean to you?

Vaughn Anthony: I basically came up with the title because that’s the life I’ve dabbled in and I’m just getting people’s transparent view of who I am as a person. I try to do the right thing. They just get to who I am as a person and just keep it moving. I just want to show my groove, when the album comes it will be something different, but this is just something that I’ve experienced in my lifetime.

YouKnowIGotSoul: What can we expect on the mixtape?

Vaughn Anthony: You can expect great music, r&b/soul, real good music featuring Rick Ross, my brother, Olivia, Prodigy from Mobb Deep, a lot of great beats from producers like Phatboi ‘s out of Philadelphia who have my brother’s first single “Tonight”. It’s just some really good music and I’m really excited about it.

YouKnowIGotSoul: You have out the single “Hold Me Down” featuring your brother John Legend. Talk about how the song was created.

Vaughn Anthony: We were in New York in the studio and that some was also produced by the Phatboi’s. We were in New York at the Home School studios and came up with the hook and the pre-hook and John had stopped by for some reason and he ended up staying and we rolled it and boom, there it is. It’s just a song about can a woman hold you down regardless of the situation or the way things are going in life; are you still down anytime and all of the time.

YouKnowIGotSoul: Another song you have out is the one with Olivia “In Your Shoes”. Talk about that song and how it came about.

Vaughn Anthony: Me and Olivia have the same manager, he heard the song and said “Man it would be great to get Olivia on that”. It was an easy decision and it came out very nice and I’ve excited about that.

YouKnowIGotSoul: Following this mixtape, what do you have planned for the debut album?

Vaughn Anthony: Yea it’s almost finished. I’m hitting the world back to back almost. I don’t have the exact name for it yet, but it’s going to definitely follow up that. We’re going to keep it moving, the Vaughn Anthony movement is definitely coming for 2012 and forever.

YouKnowIGotSoul: Right now with the radio, we’re hearing a lot of different sounds and music, especially in r&b. Where do you think you fit into music right now?

Vaughn Anthony: Just check me out on my Facebook at Facebook.com/AllDayVA and also my Twitter @VaughnAnthony1 and my website VaughnAnthonyMusic.com. Early March, “Life of a Player” mixtape will be out.