Interview: Tiffany Evans Talks Reintroduction to Music, History in the Industry, Not Putting Herself in a Box 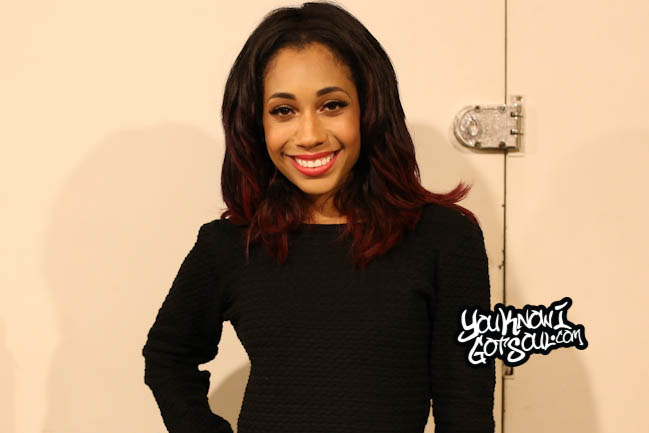 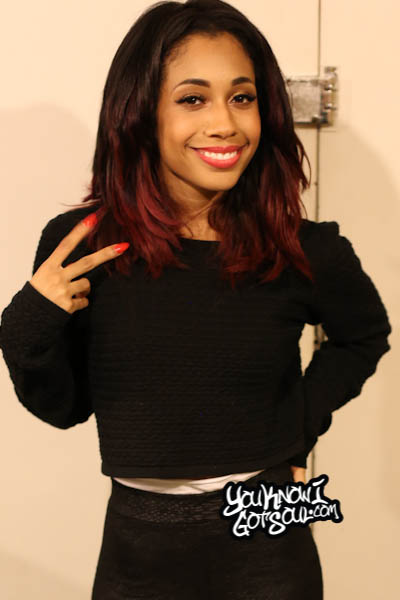 It’s been quite a journey for young Tiffany Evans. Since we were introduced to her over a decade ago after signing her first deal with Columbia Records, it’s easy to forget that she’s still only 22. After getting married and having a child a couple of years back, she released her most mature project “143” in 2013. Her growth was taken to another level when she put out her new single “Baby Don’t Go” earlier this year. Releasing her music via her own label, the future is bright for this supreme vocalist. YouKnowIGotSoul sat down with her after her performance at our Sol Village event and discussed her history in the industry, developing her new music, her plans for future releases and more.


YouKnowIGotSoul: Start out from the beginning. You were performing from such a young age and building your career. You got your first record deal at age 10. How did that come about?

Tiffany Evans: Actually I had competed on this competition show called Star Search, not the first one but the revised second one. Arsenio Hall was hosting and I won and shortly after that I was signing my record deal. *Laughs* I guess from that exposure, me winning the completion, me signing with Columbia signed next.

YouKnowIGotSoul: Between the time you signed and when your debut album released, there seemed to be a large gap. What was your development as an artist like in those years?

Tiffany Evans: Yes! Huge gap. I think it was mainly trying to figure out what to do with this 10 year old who has an amazing voice; what can she sing? Should we give her cover songs or give her original songs? Pretty much when you’re that young, it’s hard to be an artist and be believable at the same time. So I think they wanted me to grow a little bit. When I turned 14, I ended up working with Ciara for my first single and that’s how “Promise Ring” came about.

YouKnowIGotSoul: What do you remember about creating your debut album?

Tiffany Evans: It was just very hectic. It was a lot going on. I just remember that it was very long and I wanted it to come out. When it finally came out, I felt like a huge burden was lifted off of my shoulders. It’s kinda like when you put your hands into something and you have these great ideas and you want it come together and everything is coming together and then it slows down and picks up. So basically with my first album it just took very, very long to come out. *Laughs*

YouKnowIGotSoul: After you left the label, your left situation was when you started your own label. What made you want to start your own label as opposed to pursuing another record deal?

Tiffany Evans: I had been with Columbia for 10 years when I left and I was just like “It’s time to do something different, I really want to learn the business for myself, I want to know what goes on behind everything that I do.” I didn’t want to just show up, rehearse, and go home. I wanted to actually know the business. That was part of the main reason why I took a break after I parted ways with Columbia. I was offered deals shortly after that, but I declined. “Little Lady” then came about. I didn’t think about making that a label. I thought it was a great idea for a company, I’m a young lady, so why not call it Little Lady. Whatever music I released through that I was going to say it was through my own imprint. I wasn’t really trying to make it a label, so that’s how that happened. *Laughs*

YouKnowIGotSoul: When your mixtape “143” came out last year, it was noticeably more grown and mature sounding than your previous work. Was that your goal with it?

Tiffany Evans: Absolutely. When I recorded “143” I was pregnant and during that time I became a real woman. I had experienced so many different things like heartbreaks, and just life period. I wanted to make sure that the next body of work that I put out for my fans, that it showcased that and my growth. That’s what “143” did.

YouKnowIGotSoul: You’ve now got out the new single “Baby Don’t Go”. How did you know this was the right song to reintroduce yourself with?

Tiffany Evans: Simply because it’s relatable. When I wrote it, me and my younger brother and my two friends, they helped me write the record. At that moment I was really going through a situation just like the lyrics in the song and I was so angry and frustrated and mad. So I said “You know what, I just want to write about it.” When I sung the record, I noticed that I was very passionate and when I started singing the first verse it had a lot of conviction. When we listened back to it, they said “Don’t sleep on this record, this is one of your most convicting records yet! People are going to feel this as soon as it comes on. Number one, the lyrics are very true, you’re actually going through this so it sounds like you’re going through something in your voice, we can hear it.” All of that just came into play and every time we play it for someone, they easily remembered it. It’s very memorable, relatable, and passionate. That’s exactly what I wanted to present the next time I decided to step in front of the crowd.

YouKnowIGotSoul: Talk about the new project you’ve got coming early next year.

Tiffany Evans: I don’t want to say much, but I’m still recording and this project to me is the best body of work I have put together since my career has started. The music and everything is from my life. Each experience and song, it’s all about what I’ve seen and been through. I just decided to put it into music and it’s very fun but very passionate. I’m still recording now because I wanted to make I get everything that I need to say out. *Laughs* It’s just really one of the best projects that I’ve done. I’m excited for it, it’s grown, it’s womanly, it’s real, it’s truthful, and I think everybody will be able to relate to each song on the new project.

YouKnowIGotSoul: As an artist who is a true powerhouse vocalist, and as a younger artist in r&b, how hard is it to balance staying true with your music versus being commercially viable? Especially since vocals aren’t at the fore front in r&b right now.

Tiffany Evans: I never put myself in a box. I know that I have other things that I’m really passionate about. I have different talents. I can dance. It’s not that I started singing and I wanted to dance, I already had natural rhythm. *Laughs* I didn’t’ want to say “Just because I’m a singer, I’m going to stay in a certain lane”. No, because I’m a singer, I can sing anything. I can sing blues, I can sing r&b, I can sing pop, I can sing country. I just showcase a lot through r&b but I can do anything. I can also dance and act and do a whole bunch of things that people don’t know. I try not to think about “I just hope they like what I’m doing”. I don’t think about stuff like that because it’s just about being great at what you do. If it’s believable and convincing, which I’m sure it will be, then you shouldn’t worry at all. That’s what I always think of when it comes to me. If you’re great at singing, sing. If you’re great at dancing, dance. Do both if you want to.

Tiffany Evans: My new single “Baby Don’t Go” is out right now on iTunes, make sure you pick it up. My new project is debuting in 2015, it’s going to be an EP, not the second album just yet. We’re going to give you guys a taste of what the second album is going to be like. The video for “Baby Don’t Go” is coming in December. Follow me on my Instagram @WithLoveTE, Twitter @MsTiffEvans, my Facebook.com/TiffanyEvans and my site TiffanyEvansOfficial.com. I love you guys, thank you for having me!