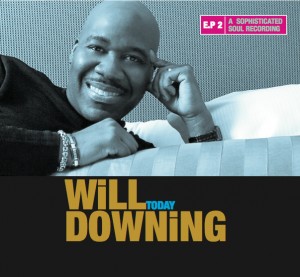 Be honest, have you ever made a judgement on an album by skimming through the songs or better yet the 30 second samples on iTunes? As music continues to move more digital, it seems like more than ever this has become a reality for many with most emphasis being placed on singles. Will Downing is looking to avoid this reality with the release of his innovative new project “Yesterday, Today, and Tomorrow”. He hopes that by releasing the project in three increments, each containing four songs over the course of 6 months, this will allow the listener to take the time to get to know all of the songs. We applaud him for this creative decision, and as more artists in r&b continue to go the independent route, we wouldn’t be surprised to see Will’s idea emulated more than once. YouKnowIGotSoul caught up with the r&b/soul veteran for this interview and discussed where the concept originated, biggest challenges he’s facing being an independent artist, if it’s possible to ever reach the success level he once did, the key to his longevity, and much more.

YouKnowIGotSoul: You’re in the process of releasing your current project “Yesterday, Today and Tomorrow”, the first two parts are out already. It’s a very unique concept the way you’re doing the release, how did you originally come up with the plan?

Will Downing: It actually started with a friend of mine who called me one day out of the blue and said “They’re playing your new single down here” and I said “Oh, well which one?” *Laughs* She told me the name of the song and she said “When’s the project coming out?” and I said “It’s the project that you already have”. That was off of the “Lust, Love & Lies” record. So she kinda told me “I don’t listen to CDs like that, I listen to about four or five songs and skim through it and then kinda put it away.” So I guess it kinda changed my way of thinking of the way people listen to music. I think people listen to music now in 30 second increments; they go to iTunes and the search engines. They listen for a few seconds and say “I like that one, I’m going to buy it” or “I don’t like that, I’m not going to buy it”. It got me to thinking maybe I was wasting too much music at one time. Projects are supposed to last a minimum of a year. Folks would come up to me and ask when the new project was coming out six months later. I’d tell them I just released something six months ago and they’d say “Well what else you got?” They got me to thinking maybe I need to break this up a little bit and just feed people in increments. Give them four songs at a time, make sure they know those four songs and by the time they finish listening to those four they’ll be ready for the next one. That was kinda like my warped kinda thinking. Conceptually I thought of something that would be “Yesterday, Today and Tomorrow”. “Yesterday” being all remakes, “Today” being all original kinda what you are accustomed to hearing from me type songs, and “Tomorrow” I haven’t quite figured out yet, I don’t know what I’m going to do yet. I’ll figure something out.

YouKnowIGotSoul: I was reading that for the “Tomorrow” part you may do something outside of the box. Is that still an option?

YouKnowIGotSoul: How has the release been received so far by fans? Has it gone as planned?

Will Downing: Yea, it has. I guess I kinda miss the bigness of the projects that I’ve released in the past, meaning in the past I might have had a twenty thousand sale week or a fifteen thousand sale week. I kinda miss hearing those numbers. I kinda like the fact that this is definitely more grassroots, this is definitely more hands on; this is the way I started out my career and when I had the most fun.

YouKnowIGotSoul: You have the current single out called “The Blessing”, talk about the creation of that song.

Will Downing: Originally the song was supposed to be just voice and piano, just an idea from a melody I had. I went to the keyboard player and the co-producer of the project Chris “Big Dog” Davis and we kinda worked this idea. Then I called in someone who I think is a much better lyricist than I am to come work on it with me, and that’s Gary Taylor. Me and Gary sat down and we kinda went back and forth with it until we came up with what you hear now. The song started out as voice and piano, and then we just started stacking stuff on it until it turned into this huge production. It’s a beautiful song. It’s probably one of my favorite’s of all time, I have three or four others and this definitely rank up there.

YouKnowIGotSoul: With this project being an independent release, what do you see as the biggest challenges releasing it?

Will Downing: I think the biggest challenge is getting the everyday person to know that it’s out. The fact that you don’t have the big machine behind you to do the promotion and to blast in your face everywhere or for it to be in your chain stores, that’s been the challenge. The everyday person who just sort of surfs the web will never find it, the music lover will find it; that’s the challenge. It’s almost like shaking hands and kissing babies, you almost feel like you’re on the political trail. That’s been the hardest thing.

YouKnowIGotSoul: A lot of more established artists in r&b and soul are going this independent route over the years now. Do you feel like artists like yourself and others can find the success you once had, or will it be tough to get back to that?

Will Downing: I don’t think that success level exists anymore to be brutally honest with you, I really don’t. I think that times have changed. This may have to be the way to go and you may just have to dumb down everything that you’ve always done. For me, I’m not expecting financially to become well off by selling product. I think that the key to this whole thing is to have product out in the marketplace, to have the public and promoters know that you’re available for shows and that’s how you exist. If you don’t have anything new to kinda say you have a new project out, everybody kinda looks at you like you’re old hat, and they don’t call you. The money is actually more in the live performances than it is in the actual product.

YouKnowIGotSoul: Would you ever feel comfortable dumbing it down or is that going against the integrity of the music?

Will Downing: Oh no, the way I’m doing it now, you don’t have to do that. There’s a slew of people out there who’ve purchased your things in the past. There’s a slew of people out there who purchase music of artists of the like, in the millions, so they’re out there, they just have to know that you’re out there. You don’t have to dumb down your music, they want it that way, they grew up with you. They just have to know that the music is out there, so in actuality, you actually have the chance to be more artistic than ever before. You don’t have anyone to answer to!

YouKnowIGotSoul: Talk about your longevity in this music industry since you’ve been here over two decades now. What’s been the key to you being able to stay relevant and stay creating good music?

Will Downing: For me, it’s just being myself. I’ve always kinda been the adult contemporary genre and the music that I’ve recorded over the years, I’ve always had ballads and mid tempo songs that are timeless. I’ve always done that. There’s always going to be a need for a song like I do or for someone like me. Even though it may not be the most popular form of music out according to the kids out there, it’s the one thing that will sustain you. Be yourself, and I’ve always done that from the beginning.

YouKnowIGotSoul: What do you see in your future for music?

Will Downing: I don’t know. Like I said, I don’t even know what I want to do with the third part of this trilogy, I’m kinda winging it. An idea will come along as it always does and we’ll roll with that. Trust me, I had no idea I would be doing the trilogy I’m doing now until I got a telephone call from that young lady and kinda one thing lead to another and that lead to another and that lead to this. I’m hoping that the elements will work out the direction, wherever the wind blows me, that’s where we’ll go.

Will Downing: In June people will be receiving the “Tomorrow” aspect of this trilogy, it will be available and the triangle will be complete.