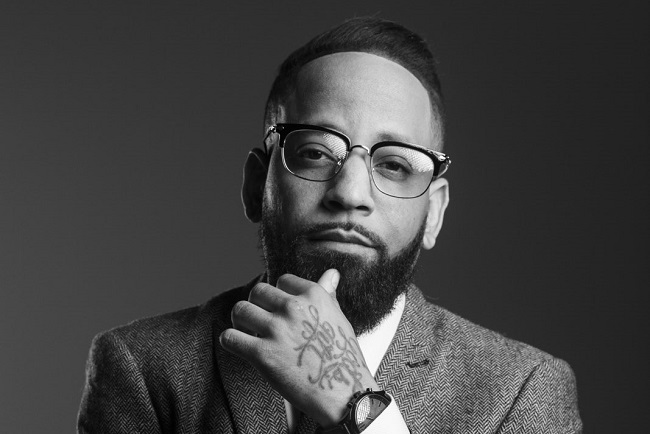 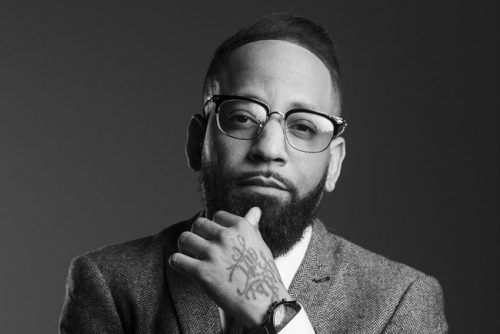 R&B artist J. Holiday has been one of the most consistent male artists of his generation as he’s dropped solid music since his debut album “Back Of My Lac” back in 2007. It’s been a joy to watch his evolution as an artist as he’s transitioned from being a major label star to being a label owner with his imprint Holiday Music Group. We talk to the talented singer about the new album “Time” as well as his journey as a man while maneuvering through the industry. We also touch on the shout out that Ari Lennox have him on Twitter recently and what it means to him that the younger generation appreciates his contributions to R&B with hits such as “Bed” and “Suffocate”.

YouKnowIGotSoul: The new album “Time” is out now. “Drip” is one of the songs that stood out to us because of the Prince influence. Talk about that record.

J. Holiday: Drip was the last song to make the album. It wasn’t sequenced yet, but we had all the songs on the album. We were going to do ten records and then Travis Cherry played me this track in the studio. I was like “I want to write a song to this”. We wrote the song together and it was one of those things that just came out. One thing that I’m going to showcase right now is that “Drip” is my slow grind “Thong Song”. The song is only one verse just like “Thong Song” where Sisqo just repeated the verse because that verse was so dope, so it’s like “Why would you write anything else to it?”. I specifically said “I want to do something like that” and of course it’s not “Thong Song”, but we did it and it sounded amazing. The album needed “Drip”.

YouKnowIGotSoul: This album was J. Holiday at its finest. There were no trap drums on there.

J. Holiday: For sure. A lot of that was on purpose. I would talk to Sizz and ask what he would do with the drums and he’d say “Nothing”. We’re giving you guys poetry. Of course you got the Afrobeats on “Feel Like” and there are other songs that deserve drum tracks, but there are songs that don’t have tracks and those are the ones we want you to listen to the lyrics. Those are really specific.

YouKnowIGotSoul: How do you stay true to your sound? A lot of artists fall into the trap of trendy sounds.

J. Holiday: I’m not going to say I’ve never fallen into it, but I refuse to feel like I’m forced into doing something just because it’s trendy. I’ll do that on my mixtapes, but my albums are straight up R&B. My mom once said “Don’t be a follower, be a leader”. I just feel like my talent and passion is strong enough to stand. I got into this for R&B, not trendy. If you notice, I don’t have many features. You will water down and muddy up what you do to be seen. R&B has gone up and down and I have to be the guy that always puts out quality work.

YouKnowIGotSoul: Ari Lennox tweeted about you recently and praised you for being a dope artist. What does it mean to you to see the next generation giving you your flowers?

J. Holiday: People will say flattered, but I don’t feel flattered. I feel absolutely humbled that a new artist could look at me the way I looked at the people that came before me as a new artist. There are songs that Carl Thomas put out that people have never heard, but it doesn’t matter because that influenced me. I looked up to Brandy, Tank, Musiq Soulchild and D’Angelo. To be mentioned like that is dope. It’s dope because she didn’t have to mention a song or anything, she was just like “You guys are missing something because J. Holiday is a dope artist”. Congratulations to Ari on her number one. It feels good, I know it does.

YouKnowIGotSoul: Now that you’re running your label Holiday Music Group, Do you enjoy the process of being a label owner? I know you’ll always love making the music.

J. Holiday: Well first off, I hate making the music. I love writing and performing it, but I hate recording it. It’s my least favorite thing about the entire thing. *Laughs* But not having to deal with a major is amazing because I have a team that understands me. I know sometimes I’m hard to work with. I’m human and I get in my emotions sometimes. They keep me pushing when I’m say “I’m done with the industry”. Sometimes you second guess yourself as an artist. I’ve always been in a place to perform “Bed” and “Suffocate” which changed my life completely, but you have songs like “Pimp In Me” and “Wrong Lover”. I just try to give the fans what they want, but sometimes the fans request the most random songs I’ve done. I love being in the position where I’m in right now being an executive, an artist and a writer.

YouKnowIGotSoul: It’s funny looking at the people you’re linked to like Lucky Daye who wrote on your second album and Muni Long who was your labelmate at Capitol years ago. They’re finally blowing up, but they’ve been talented for a long time. Do major labels know what they’re doing?

J. Holiday: Let me try to answer this strategically because you gotta think, I had my manager Darius at the major label as my first A&R. People don’t even know what that means today. I was ready to do my next album and I told them “Either let me go or let’s do what we gotta do”. Darius told the powers that be “If you let J. Holiday leave, I’m leaving Capitol”. Mind you this is someone who has been in the industry before Capitol. When I heard that, that meant so much to me. I didn’t even look at myself at that point. I was the marquee Urban artist on Capitol. Do the labels know what they’re doing? Of course they do. Money talks. There’s no hard way to get an artist to pop. Now what is the longevity going to be? Who knows. But to get them to pop with the label, money, backing and marketing? That’s easy. Do they know what they’re doing when they have an artist like myself that has dealt with four or five label presidents? Now they’re doing heads at the department and they had nothing to do with “Back Of My Lac” and “Round 2”. I did my whole second album by myself and recorded it at my house. The label had to cut me a check for a recording budget because you can’t have this album unless you cut me the check. They hated that about me. Darius told me that was the right thing to do. I could have just handed them the album but I knew there was a recording budget for every album. They didn’t allot me one so I finished it at my house. That’s how I got “Forever Ain’t Enough”, “Fly” with Tank and different records.

YouKnowIGotSoul: As time has progressed, what’s been the biggest difference about you as an artist and a person versus you when your 2007 debut album “Back Of My Lac” came out?

J. Holiday: That’s a good question. I don’t think there’s much different about me as an artist. In terms of personal and manhood, I’ve missed a lot of my time with family and kids. This whole promo run I’ve done, imagine doing all of this with a two year old. It’s just realizing who you’re becoming and stop being the person the rest of the world wants you to be. At the end of the day, all you have is your team, family and your art. My core fans great and they know that when I drop something, it’ll be dope. I have learned to understand that people are going through stuff. Just because they tear you down doesn’t mean you tear them down back. I can say that I’ve matured and I’ve grown. Just even with my peers, I’ve gone through stuff with them and I’ve had to tell them I was wrong. You forget that it’s a competition, but when it comes to social media, it makes you feel like you have to down someone to get ahead. Sometimes it backfires and you just have to grow. I’m never going to disappoint musically. That’s important to me because I have people that depend on me and that have to answer questions if I do something crazy. You have to keep that in mind as an artist and an executive.