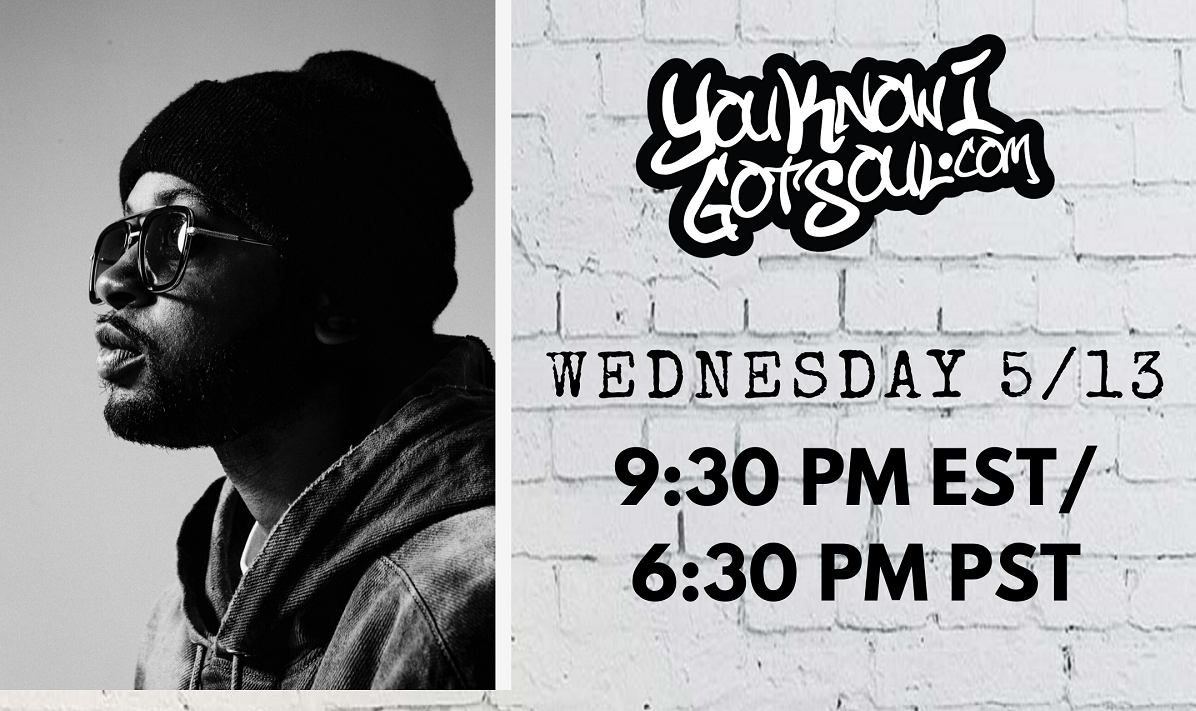 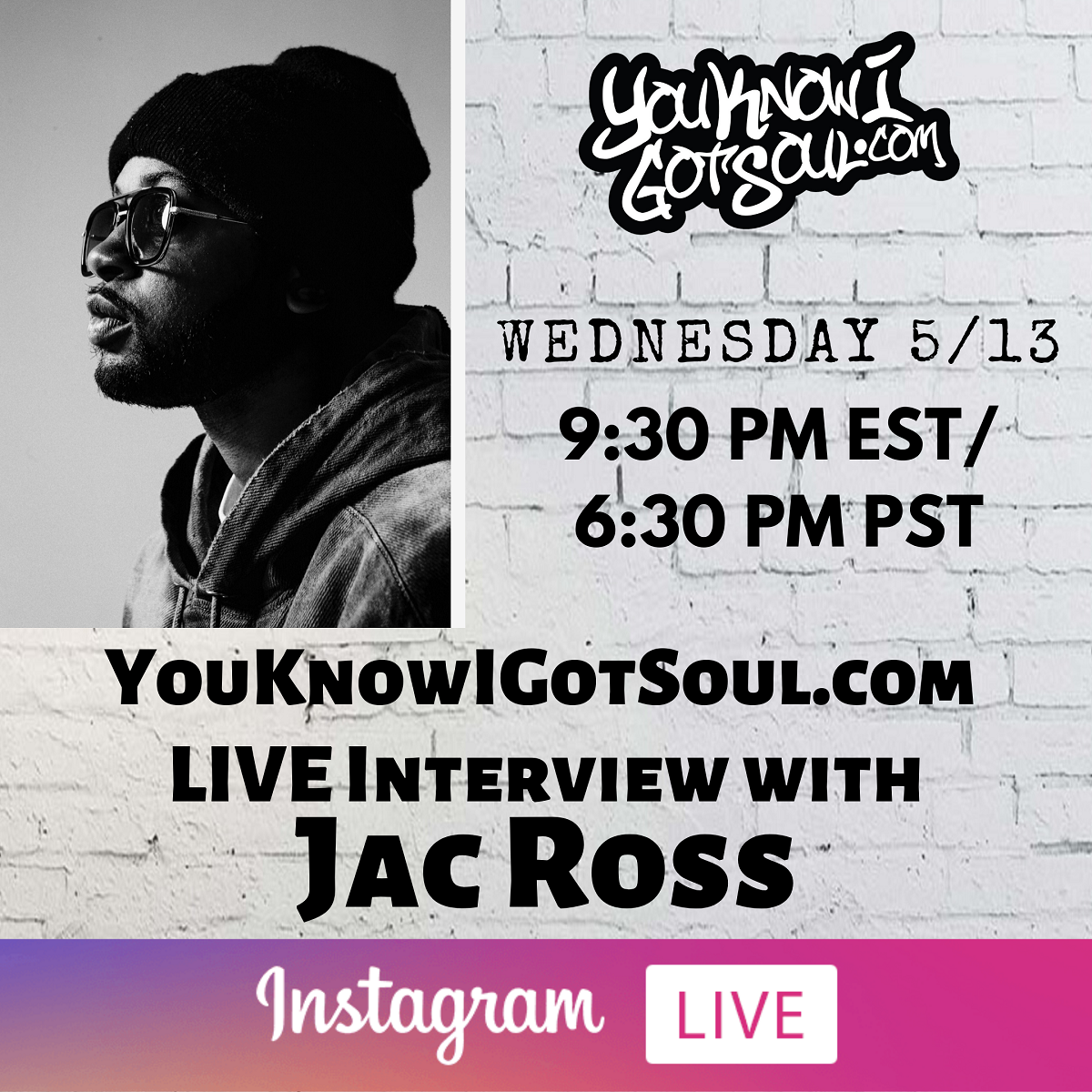 We caught up with emerging R&B star Jac Ross for an interview recently on Instagram Live. During our conversation, we touched on his journey through music so far, linking up and signing with Rodney Jerkins aka Darkchild, what to expect on his upcoming EP, his vintage soulful sound, and much more.

YouKnowIGotSoul: Your music has a vintage feel to it, but doesn’t sound old. Take us through your beginnings as an artist.

Jac Ross: I come from a small town in Florida. There weren’t many musical outlets. I’ve been singing since 5 years of age and I can just remember my father, when I was 12, taking me to a Gospel concert. That night I decided I’d be a professional singer. I began to make music and make my own beats and try to do my own recordings. I got better and better. But I had nowhere to put the music. I connected with a producer out in Orlando by the name of Andy Anderson, who connected me with a friend named Mezzo. One night I could remember I was just singing, on my birthday, and I told the lord I needed a break. He calls me on my birthday, and told me he had Rodney Jerkins for me. A few weeks later I drove up to Rodney’s house in Florida. I got to perform for him live. I sang “A Change is Gonna Come”. I believe on the first line, I knew I had him, he was hooked in. When I was singing, I just was thinking my life was going to change. He later signed me to Darkchild Records and then we’ve been rocking with Island Records since then. The journey has been long but I’m appreciative of everything I’ve gone through. I’m just excited to get to the next level now.

YouKnowIGotSoul: Who were your original influences musically?

Jac Ross: When I was growing up I did listen to a lot of different variations of music. My favorite singer will forever be Sam Cooke. I think the way he catered his voice and the way he held his notes and adjusted his wind, all of those things were something that was very attractive to me as an artist. He was someone I wanted to try to mirror and make my own sound off of. I also listened to James Brown and Marvin Gaye and Bob Marley and Akon. A wide range of music, but Sam Cooke is definitely my favorite. I would intentionally study him.

YouKnowIGotSoul: You linked up with Rodney Jerkins. Take us to your first moments working with him.

Jac Ross: You know what, when I was in the studio with Rodney, I don’t think I had the time to realize the shock. I was so focused on bringing my family out, and taking my wife and my kids to the next level, I was just focused on getting there. In that moment I had to take advantage of that opportunity, and boy did I ever. When I look back, I have these moments when I realize I’m working with a guy who has worked with so many legends. For him to just consider me an artist to work with and to sign, is such a high honor. Now when I look back, I’m blown away by some of the things we’ve accomplished in a short period of time.

Jac Ross: I think when I first met Rodney, the chemistry was automatically there. When we first got into the studio, our first original song that we recorded is called “Try”, and we did it in one take. The chemistry was amazing, but we honestly didn’t know what our style was going to be. We had to figure it out. We wrote song after song after song. Everything was sounding really good. We got in there and I think we had a moment, where we knew it was the sweet spot. Rodney hadn’t worked with a voice in this style, and obviously I had never worked with a producer on that level. Once we got together and we figured things out, I’ll tell you what, it was magic. I know that everybody is going to love what we’ve got coming out. The process seemed so quick. In a very short period of time, we’ve recorded 88 songs. It really is magic working with Rodney.

YouKnowIGotSoul: The subject matter of your songs is like nothing we’re hearing right now. Was there ever any pressure to go against what’s popular?

Jac Ross: Not at all. The music that I put out is reflective of who I am as a person. I want to talk about social injustice and racism and the things that no one else wants to talk about. I believe I’m making a difference. That is the reason I’m so attracted to old time artists. They had a story to tell and were making a difference in the world with their voice.

YouKnowIGotSoul: What’s the response been like so far after you’ve released your music?

Jac Ross: I receive it in the most humble way possible. I think it’s just super amazing. I don’t let that feed me too much. I think it’s very kind, but again, I don’t let it get to my head. I’ve got so much more I want to do. I want to reach my goals. I was always taught growing up that the lower that I stay, the higher I’ll go. That’s my message to everybody out there.

Jac Ross: This song really deals with a lot of what’s going on today. We have so much injustice, whether that be social or racism, or police brutality. I believe it targets so many broad subjects. Who do you think you are to pray to God and then take a life? These are things that are going on, and I think that this song reflects the message of today’s time. We’ve got to bring some type of resolution to these questions.

YouKnowIGotSoul: You’ve been working on an EP. How’s that coming along?

Jac Ross: The EP is called “The Truth Revealed”. In short, it’s about truth. I believe that there is no such thing as my truth, just the truth. I’m doing the best that I can to give people what I believe is the truth. By the truth that simply means asking all of the tough questions and saying things people don’t want to hear. The whole writing experience comes through the lens of life. I know that people will be touched by it. The goal of the EP is to transform life and give healing and transformation. The date of the release is forthcoming. But we will release singles in the meantime.

YouKnowIGotSoul: Reflect back on the grind period you had before you even had a chance to work with Rodney.

Jac Ross: One of the things I tell people about is the struggle. I can remember two years ago I was teaching music and special needs in school. During the same time, my first born daughter, due to a medical malpractice, her arm was paralyzed. I just wasn’t making a lot of money then. I can remember having to make a decision. The insurance company denied us 11 straight times. They said they would not cover the surgery. I looked at my wife and said we’d have to stop paying rent and be evicted so we could afford the surgery, or she’d have to live with her arm that way. So we stopped paying rent, we saved our money, and we went all the way to Cincinnati, Ohio when she was six months of age. I had been raised in a way to be responsible, and I had to move back in with my parents. Things were difficult, we went through a lengthy four year lawsuit, and we were offered $1 to settle the case. I was really discouraged. But this doing music is what I know can get me out and take me and my family to the next level. I never, ever gave up. So many times I felt like I should have given up and quit. If you are listening and have dreams and goals, don’t give up no matter how hard it is. You know what you are capable of doing.