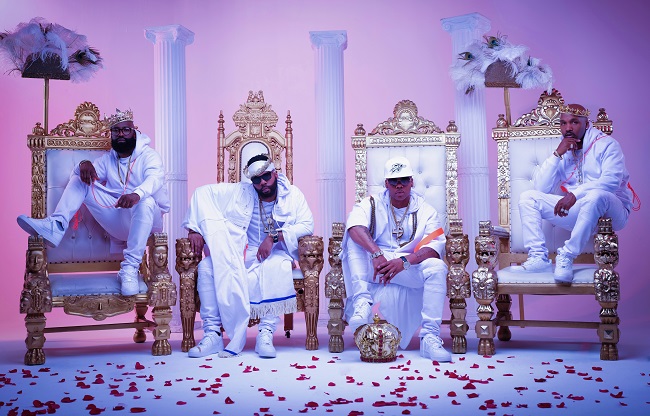 Jagged Edge released their 10th studio album “A Jagged Love Story” last year and they’re already working on new material. We had a chance to talk to Wingo, Brian and Brandon from the legendary R&B group about their upcoming duets album as well as their brand new podcast “Views From The Edge”. We also touched on their first two albums “A Jagged Era” and “JE Heartbreak”. Lastly we reflect on their brotherhood and the fact that they’ve been able to stay together after so many years along with putting out music consistently.

YouKnowIGotSoul: You guys have started your own podcast “Views From The Edge”. Talk about the inspiration and what people can expect on there.

Brian: I think one of the main inspirations is the fact people seem to be so amazed at our natural bound. People get around us and people always talk about our chemistry. We don’t really have any issues, we worked those issues out when we were kids. Our main inspiration was to show that to the world. We’re going to weigh in on different topics in entertainment and outside of entertainment.

Wingo: Get ready, it’s going to be crazy!

YouKnowIGotSoul: When you guys first started as a group, what stood out to you vocally about each other and what made you think it would work?

Brandon: When we were putting this together, the thing that stood out to me about Wingo and Kyle is that they have a texture to it like our voices. It’s not thin. They have a very distinctive textures to their voices just like us. When you put those textures together with the music, it’s always something special.

Wingo: It’s like sports. It’s a team and everybody has to play a role. What basketball team has five point guards? You play your role to the fullest and you do your job or you don’t get the trophy. We all want the same common goal. I’m in a group with some awesome writers with different flavors, so it’s the best of both worlds to me. That’s one of the reasons why Jermaine Dupri signed us. We’re a self-contained group. He could put us in the studio and we’d come out with a hit record. He didn’t have to micromanage us. It’s awesome and it’s been a fun ride. We’re going to ride this until the wheels fall off.

YouKnowIGotSoul: We just put out an article and looked back at all the groups from the 90’s. Just about every single group has broken up at this point. That’s an epic thing.

Brandon: We talk about this all the time. Me and brother both had kids at 18 years old. When we were blessed with this opportunity to do this, we understood that this is how we feed our family. The things that people bicker about, so what? As long as we are the sole providers for our families, nothing else can take us away from doing what we’re supposed to do.

Wingo: We have to be together in order to be that.

YouKnowIGotSoul: A lot of R&B groups only lasted two or three albums. Jagged Edge just released their 10th studio album which is an amazing accomplishment.

Brian: We’re midway through the 11th album which is going to be a duet project. We’re six songs deep, it’s going to be crazy.

YouKnowIGotSoul: Reflect back on the early grind because you couldn’t blow up right away through the internet like you can today.

Brian: Today it’s a little easier to get your stuff out, but it may be harder to become a celebrity. In our day, it was hard to get a deal. For us, we were getting thrown deals left and right. We had deals on the table from Mike Bivens, Dallas Austin and Rico Wade of Organized Noize. The thing about the Mike Bivens deal is that because we looked up to New Edition, so that was the deal that let us know that we could really do it. He had 702 and Another Bad Creation and he was what he was to BBD. We said “If he wants us, then we can really do this”.

YouKnowIGotSoul: We spoke to Jermaine Dupri recently about your debut album and discussed why it took the group a little longer to take off compared to some of your peers. JD faulted himself and said that he didn’t get the formula down right away, but once he figured out that Jagged Edge’s sweet spot were the ballads, everything worked out. Did you know that was the formula?

Brian: We told him that from the jump. We used to have arguments about that. He would tell us that we didn’t have a sound which we disagreed with. He told us we couldn’t do an album full of slow songs and we were like “Why not?”. To his credit, we’re glad he made us stick it in with the fast songs, but we felt people were going to love our ballads.

YouKnowIGotSoul: Jagged Edge’s debut album “A Jagged Era” is slept on because everyone knows “JE Heartbreak” as a classic.

Brandon: I agree. I think the climate was just so heavy with groups. Jermaine thought the formula was to heat them up with a fast record and then hit them with a slow record. By that time, the public had seen it too many times. People were like “What’s going to be different about these guys?”. When we dropped “Gotta Be”, it was over!

Brian: Though those fast songs were good, they didn’t showcase our sound. Even though we wrote them, Jermaine was leading us on what to do. When it came to the ballads, we knew what we wanted to do. We created “Gotta Be” acapella and they structured the music around that. The ballads allowed us to do us and they came around to accompany that.

YouKnowIGotSoul: When putting this group together early on, how did you guys come up with the formula of Brian and Brandon being the lead singers?

Brandon: Everybody can sing. We never decided that. Jermaine positioned it that way and with anything, once you have success you want to stick to it.

Brian: Jermaine would be like “Brandon sounds better on this” even though I wrote on a part. When it comes to Wingo and Kyle, it’s almost impossible for them to work as much as me and Brandon so that’s probably why we’re on those records more.

YouKnowIGotSoul: People often ask what Kyle does in the group, but we know he can actually sing. We need to give him more love.

Brian: We structured this group from four individuals that could sing. When we first started this group, we had six members and we structured group like Take 6. To be in this group, you had to be able to sing. Kyle is no exception.

Brandon: Kyle would always say that he’s a background singer and that’s by choice. I think he would rather make his presence felt in other ways.

Brian: In our first couple of tours, Kyle would sing “Let’s Chill” by Guy by himself. He’s always been a talented singer, but he prefers to do the Wild Kyle thing.

Wingo: Everybody can’t write on the same song. There’s only one ball, so we have to play our role.

YouKnowIGotSoul: The “JE Heartbreak” is one of the best R&B albums ever. The intro on there is amazing.

Brian: The thing about that intro is that it was a full song. JD felt like the sentiment of the song had been captured on the album, but the bridge would be big to start off the album. He took off the beat and kept the piano. That was really the bridge of the song called “Heartbreak”. Bryan-Michael Cox has it somewhere still.

YouKnowIGotSoul: That album had so many potential singles.

Brian: Today if we would have dropped that album, we could have dropped 12 videos. Back then, the label was ready to move onto the next thing instead of fully capitalizing on the album. They had this thing called over-saturation. Give the people what they want because they wanted a single for songs like “Healing”.

YouKnowIGotSoul: We saw you on Instagram with Diddy recently and he showed you guys a lot of love.

Brandon: We are definitely helping Diddy out on his R&B album. That video you saw, we literally hadn’t seen him in 8 years. That was our first time seeing him in a long time.

Brian: This isn’t a shot at JD, but the way that Diddy showed us that love, you would have thought he was the person that signed us. He told us he missed our voices and the way we wrote songs. We don’t get that love from JD too often, but there’s no issues with him. We have a big brother, little brother thing with him.