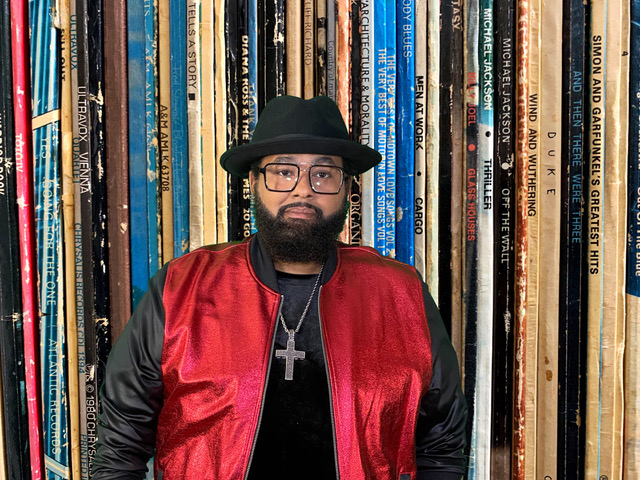 We had a chance to speak with Jamie Jones from the R&B/Pop group All-4-One. During this interview, we spoke about his latest EP “Christmas at Home with Jamie Jones” and his approach when creating solo material. We also spoke on the group’s history including their massive hit “I Swear”. We also touch on All-4-One’s discography and talk about what they have coming up.

YouKnowIGotSoul: You just released your Christmas EP “Christmas at Home with Jamie Jones”, talk about putting it together.

Jamie Jones: It’s so funny because it was kind of last minute. For those that do not know, I do a lot of songwriting and production. I work with a lot of different artists. I was actually working with my best friend Wayne Brandy and I’m actually working on his next project. We were going to do a Christmas EP on him because he hasn’t released any music in awhile, but in Wayne Brady fashion, he’s got another amazing TV show that you’ll see coming soon. We weren’t able to spend time on a Christmas project, so we just focused on his regular project. I told him that I was going to finish the Christmas EP and put it out as my solo project since I haven’t put anything out since 2005. I put this together really quickly with some of my musician friends like The Heavyweights.

YouKnowIGotSoul: Talk about balancing between working with your group All-4-One and your solo endeavors.

Jamie Jones: It’s been a blessing. Me and the guys are celebrating our 26th year anniversary of us being together. It’s the same original four and we’ve never stopped touring. We’ve always said that All-4-One is the base of everything we do, but I started singing when I was five years old and my goal was to be a solo artist like Michael Jackson or Prince. God had other plans and made the group thing work out. That’s still fun and those guys are still my brothers, but we all have musical aspirations that differ than what the group does. Delious is actually working on some solo stuff too and I’ll be doing a regular solo R&B EP soon too. I’m also working on All-4-One music too, so we’ll be busy.

YouKnowIGotSoul: When we look back at all the R&B groups that came out in the 90’s, no one ever talks about All-4-One. Did that bother you?

Jamie Jones: I think it’s because we were always a little more Pop/R&B instead of being straight up R&B. It’s so funny because when we started our first album, it was an R&B record. “I Swear” literally got added on the last minute and it wasn’t even in the artwork for the first 250,000 copies of the album. It just had a big red sticker on it that said “Also includes the hit single”. It was black radio that started our career with “So Much in Love”. When “I Swear” came out, that went super Pop. We faced this weird limbo where we weren’t black enough for R&B folks but we weren’t white enough for the Pop folks. We were in this middle area, but we were still so blessed to have people who supported us. We learned that it doesn’t matter what genre they put us in, it only matters if people are loving our music and they’re supporting us. I can’t fit into anyone’s box. I can only be me and we had to learn that. I love Jodeci and Boyz II Men. We’re all cool and it’s not a competition. There’s room for everyone to do some dope stuff. You just have to do you and let the rest work itself out.

YouKnowIGotSoul: You guys have been able to find so much success overseas in Asia. When did you guys start realizing that there was a fanbase over there?

Jamie Jones: It was in the beginning. Whatever records we sold in the US, we would do that plus half outside of the US. We were able to establish the fanbase especially in all of Asia. We were the third American band let into mainland China. Honestly every year, we’re somewhere over there whether it’s Thailand, Indonesia, Hong Kong, Philippines or Japan. The fans have been supportive and they love for us to do shows. When people didn’t know what was going on here, we were over there working.

YouKnowIGotSoul: What do you remember about recording your GRAMMY award winning debut album?

Jamie Jones: The 90’s were so dope. You had this coming together of Hip Hop and Soul. They were finding their ways to each other. They used to be completely separate things but then Teddy started it with the New Jack Swing. You would hear Hip Hop beats and people would be singing over it or you would have Snoop Dogg on the Pop charts. It was stuff you had never seen before. You would get that raw feeling that you loved about Hip Hop, but you would get dope melodies and harmonies on top of it. The 90’s were about emotion. When you heard a record, you would feel something. I think some of the music today, we’re missing some of that emotion. There are some dope artists that I love though and that I’m connecting with though.

YouKnowIGotSoul: Talk about recording the single “I Swear” because I know it was originally recorded as a Country song.

Jamie Jones: It’s crazy. Our album was finished and we were mastering it. Doug Morris, who was the President of Atlantic Records, called us into his office and said “I want you to hear something”. We went into the office and he played us the Country version of “I Swear”. Doug was like “I want you guys to sing this song” and I was like “Wait a minute! We’re an R&B group and black radio is playing our music”. Doug was like “You just let me worry about all of that stuff. I’m going to get David Foster to produce it on you guys and he’s going to do for you what he did for Whitney Houston”. I remember all the other guys saying “Let’s do it” and I was a little hesitant. Before he had the meeting with us, he had offered the record to Gerald Levert, but Gerald turned him down because it wasn’t an R&B record. We were very fortunate because that became a huge blessing for us.

YouKnowIGotSoul: Talk about the second album “And the Music Speaks”. Did the sound of the group change because of the success of “I Swear”?

Jamie Jones: Most definitely. When we started, our goal was to be completely R&B. “I Swear” came along and changed the trajectory of our careers. When we went into the second album, they were like “You can have some R&B but we have to throw some Pop in there” because we now had a fanbase that wanted to hear something that could go with “I Swear”. We had “I Can Love You Like That” which was our first single. Our last single on her first album was “She’s Got Skillz” and that was still at radio. We had to get radio to stop playing “She’s Got Skillz” so we could play the new single “I Can Love You Like That”. We called the album “And the Music Speaks” because we used to get a lot of questions about us being different ethnicities. Our whole thing was “Color doesn’t mean anything. Soul is an unseen thing and anybody can have soul. Anybody that loves deeply can have soul”. We were just tired of answering questions so we wanted to let the music speak for us.

YouKnowIGotSoul: You guys have the Diane Warren record “I Turn To You” on the Space Jam soundtrack. Talk about that song.

Jamie Jones: Wow, you had Michael Jordan and Bugs Bunny in a movie. Plus Diane Warren wrote the song and Jimmy Jam & Terry Lewis produced it. The only thing that sucked about that situation is that we were supposed to be the last single. The soundtrack had already sold 10 million records. At the time, Doug Morris wasn’t there anymore and they had someone new in charge. They told Diane Warren that they had already sold 10 millions so they weren’t going to promote it anymore. Diane said “I’ll pay for all the radio and when this song goes number one, you’ll just pay me back”. The label still said “Nahm we’re good” and then Diane said “I’ll just release this on somebody else and show you”. A few years later, Christina Aguilera put it out and it went straight to number one.

YouKnowIGotSoul: Talk about the third album “On & On” because music had changed so much between your second album and this one.

Jamie Jones: Not only was the sound of R&B changing, the sound of Pop was changing. Timbaland, Pharrell and Chad were doing their thing and then people like the Backstreet Boys, NSYNC and Max Martin were doing their thing too. Atlantic wanted us to be more Pop and be like the Backstreet Boys. Before Backstreet Boys blew up, they hung out with us and they told us that they wanted to be like us. We told Atlantic that they need to let us be All-4-One, not Backstreet Boys. We butt heads with the label because of that. We stuck to what was working for us. At the time, we were signed to an independent label who had a deal with Atlantic. It was a joint venture. I remember during the middle of our first single climbing on the charts, the independent label was like “We don’t need Atlantic anymore”. We were like “Our song is going up the charts though!”. That was our last hurrah with Atlantic and we’ve been independent ever since.

YouKnowIGotSoul: Talk about going independent after that third label. I’m sure that was a big struggle at first.

Jamie Jones: Of course. At the time, iTunes wasn’t around so you had to fight shelf safe at BestBuy and HMV. Each week, they only allowed so many records to be on the shelves and you were fighting with major label releases. We wanted to be who we wanted to be and sing our music. My whole thing with music is that at the end of the day, you put your best foot forward and then you pray that there are other people who listen to music the same way you do. We didn’t want to keep putting ourselves in a situation where we had to be NSYNC. At the time, there were opportunities for us to get back on a major label, but we were going to run into the exact same issues that we had before. We had to make a choice and it may have backfired on us, but we had to try or else we would live with all this regret.

YouKnowIGotSoul: All-4-One’s last album out in 2015. Talk about new music from the group.

Jamie Jones: On the last album, we did embrace the R&B side of our lives. That’s probably more of my own music because I’m such an R&B head. I haven’t done a solo situation in a minute. I wanted to do more R&B stuff and we all trust each other. We will always have to do some Pop sounding stuff because we have fans that want that from us, but as artists we want to grow and stretch your legs a little. Hopefully people give us that room to do so. You just have to do some stuff that makes you happy. You don’t want to keep recycling stuff because people can listen to the old music, but you also want to keep giving people the stuff that they love.