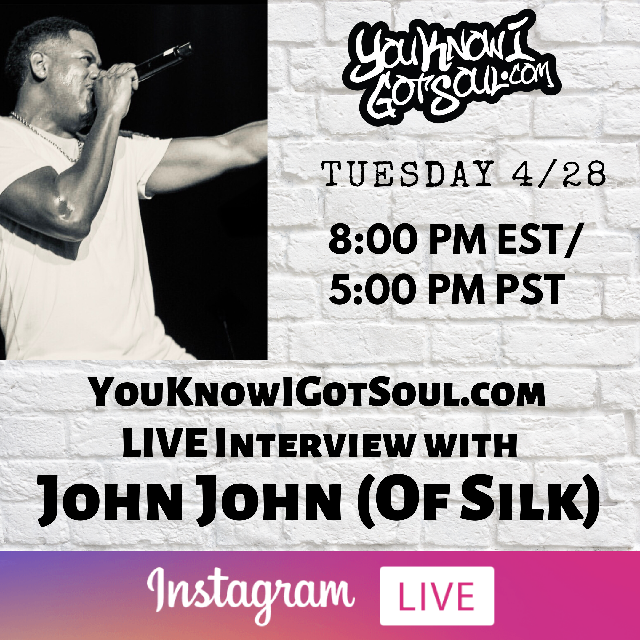 We caught up with John John of the group Silk recently for an interview on Instagram Live. During our conversation, we talked about the solo album he’s working on, new music from Silk, the history of how the group came together and was discovered by Keith Sweat, the history of some of Silk’s biggest albums, and much more.

YouKnowIGotSoul: Tell us about the solo project you’re working on.

John John: Oh man, I’m super duper excited. It’s a project that me and my brother super producer Delite Allamby have been collaborating on. He is with me on this journey to bring back good soulful 90’s R&B music. We got a single we’re going to put out very soon entitled “Do You Believe in Love”. You guys be on the lookout for that. We’re definitely going to do a lot of special things. I have a five song EP I’m doing. It’s one of those things I’ve been thinking of doing for a very long time. I’m truly excited about it. It’s going to be that special baby making love music you’re accustomed to hearing from Silk. It’s something I’ve been aspiring to do for a long time.

YouKnowIGotSoul: Are you guys working on a new Silk album?

John John: Silk has been in the studio. Along with me doing my solo project, we’ve been in the studio while also doing shows. We’re revamping everything and getting things together. You’ll hear from us soon. Another Silk album will definitely be coming.

YouKnowIGotSoul: Share with us the story of how Silk came together as a group.

John John: The group was formed at McDonald’s! This is a true story. A guy by the name of Delvis Graham, he is no longer in the group, but he is cousin’s with two members in the group. He was the manager at McDonald’s in downtown Atlanta. I was 15 or 16 and I was going down there to apply for my first real job. Long story short, I used to close the store, I was an employee who after everything was done closed down the store. Every night I used to sing as I was cleaning up. The guy who was the manager who was in the group in the beginning heard me singing. He asked me if I had ever thought about being a group. I never did, but I was willing to try. It started out with three members. This was back when talent shows were really big in Atlanta. He let me meet his cousin, which is Jimmy, who is still in the group. We sat in the back of McDonald’s and we tried to think of a name for the group, for three of us. I suggested we should be called “Three To Go” or “Three the Hard Way”. After a while, one of the guys said since we wanted to be smooth and we harmonized very well, Silk is smooth, why not Silk? It just stuck. That’s’ where the group began in that McDonald’s in downtown Atlanta! I think it’s a Georgia Power electric company now.

YouKnowIGotSoul: Tell us about how you guys got discovered by Keith Sweat.

John John: One of the guys in the group, Timzo, his brother worked for a furniture company. He delivered furniture to Keith Sweat’s manager at the time. He walked into the house to deliver the furniture and saw plaques on the wall of Keith Sweat. So he told Keith’s manager about Silk. She told him they were having a barbeque and to bring the group over, and Keith Sweat said he’d be there. If Keith liked them, maybe we could all do something together. At that time, we’d been singing anywhere that anybody would listen, even trains! I think we’ve sung at every church in Atlanta. The barbeque came up and we got together with our best Sunday suits on. We went over and Keith Sweat was there. They had a basement and they were upstairs talking. This was when Keith Sweat was really, really popular. We were scared to go upstairs so we ended up singing in the basement and he heard us from upstairs. He made his way downstairs and before it was all over, he was singing with us! It was so surreal. From there, we just never stopped working together, it was history. We’re still cool to this day! He’s still Poppa Sweat but he won’t like that I said that! He brought us into the game.

John John: I remember starting it in Atlanta and finishing it in L.A. It was one of those things where we were hungry and brand new and we were ready. That album even from the start of it just felt so special. “Freak Me” was actually the last song on the album that we picked. A lot of people think otherwise, but we were kinda against it. I remember pulling over on the side of the road after the first single “Happy Days” came out and remember hearing ourselves on the radio. All of the hard work and practicing and walking to the train station paid off. And we still have got the same five members from 1992!

YouKnowIGotSoul: What is your involvement in the creation process of the albums?

John John: Obviously I sing. A lot of people don’t know I write as well. I wrote a little something on each of the albums.

John John: I remember being put in the forefront of that particular album. We all sing, and people think me and Lil’ G are the lead singers, but it depends on the song. We’re all fine with that. I just think for that album it was at a time when we were looking for direction, we were coming into a new era of music and we wanted to do something fresh and innovative and with staying power. I think we set the bar so high with Keith. We wanted to make sure the sound was perfected. That album, producer “Delite” Allamby came in. I didn’t know if he had the heat when he first came in. But he started playing things, and he played “Meeting in my Bedroom”, and the music was amazing. It drew us in. That was the initial thought of mine. The “Tonight” album I consider a breakout album for me. That’s another that’s near and dear to me. It fell right into place with the whole “Lose Control” with what we were trying to graduate to. We didn’t have a blueprint on how to get there but Delite brought it to us. Everything worked out perfect. If I had a quarter for every time somebody came up and said they had a baby to that album! *Laughs* People even say I owe them child support!

YouKnowIGotSoul: How come Silk’s name never comes up when it comes to the discussions of top R&B groups of the 90’s?

John John: I do hear those discussions. That is a hard question to answer. A lot of people come up to us and ask why we weren’t part of certain tours. We do what we can do, we can’t choose who people pick. I know we would absolutely love a few more accolades. It just happens. We are working on being more visible as well. We came out in the early 90’s, music and radio is not that way anymore. Everything is digital and you have to adapt to that world. We get together and talk about being more visible to the fans.