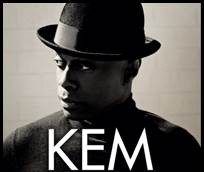 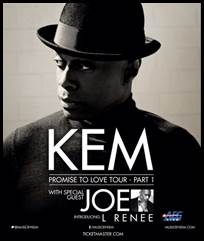 KEM’s “PROMISE TO LOVE TOUR – Part 1” will hit 8 cities at concert halls this November, while his full U.S. Headlining “PROMISE TO LOVE TOUR” will launch in the Fall of 2015. The tour takes its name from the title of KEM’s newest chart-topping CD, ‘PROMISE TO LOVE,’ with “Part 1” beginning on November 14, 2014 at Ft. Lauderdale’s Broward Center. Tickets go on sale on Friday, October 3 at 10:00amET at ticketmaster.com.

KEM’s galvanizing live performances have captivated audiences for years and have catapulted him into the ranks as one of music’s top touring acts. KEM promises to deliver an unforgettable experience to audiences that will include his classic hits such as “Love Calls,” “I Can’t Stop Loving You,” “Share My Life” and “Why Would You Stay,” along with new favorites from ‘PROMISE TO LOVE,’ including the dynamic lead single, “It’s You,” which spent four weeks at #1 on UAC charts, “Nobody” and the CD’s title track, “Promise To Love.”

KEM’s ‘PROMISE TO LOVE’ CD debuted at #1 on the R&B Albums chart, it soared to #3 on Billboard’s Top 200 chart and is the singer/songwriter/producer’s second #1 debut on the R&B chart. ‘PROMISE TO LOVE’ is powered by the UAC chart-topping single, “It’s You,” and includes guest appearances from Snoop Dogg on “Downtown,” Ron Isley on “My Favorite Thing,” and Kemistry Records Artist, L Renee, with her debut single on “Don’t Say Goodbye.”

KEM wowed a national audience with a mesmerizing performance of “It’s You” on Good Morning America on August 26, and recently returned from a September trip to South Africa, including two shows in Johannesburg and a tour of Capetown. He appeared in a compelling interview and performance in an episode of InterludesLIVE on TV ONE that premiered on September 27, and will perform “Nobody,” the second single from ‘PROMISE TO LOVE,’ on the Steve Harvey TV show on Friday, October 10. KEM will head back out on the road on a 25-city tour with Charlie Wilson in February & March of 2015.

PROMISE TO LOVE is available at retail stores, on iTunes (http://smarturl.it/KemPTLDLX) and on Amazon (http://www.amazon.com/Promise-Love-Kem/dp/B00LRCVEU0/?TAG=capitrecor-20).