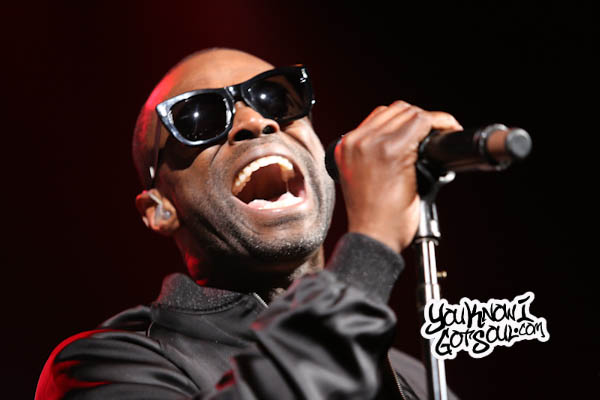 Check out our latest interview with Kem. During our conversation, we touched on his dominance on the Adult R&B Charts, his new single “Lie to Me”, what to expect on his upcoming album, being able to evolve his sound, the gap between this album and his last, and his journey to getting signed by Motown years ago.

YouKnowIGotSoul: Talk about your new single “Lie to Me”. The song is already #2 at Adult R&B Radio in just 7 weeks. It never ceases to amaze us how quickly your songs move up the charts. Talk about that.

Kem: It’s very gratifying! *Laughs* To not have released any new music in six years, and then have radio and people embrace the new music is a very cool thing. It’s something I don’t take for granted. There is a lot of good music out there. We feel really good about it. I think this single has gone up the charts the quickest of all of the music I’ve put out.

YouKnowIGotSoul: The single “Lie to Me” to me was co-written by an amazing group of artists: Anthony Hamilton, James Poyser, and Salaam Remi. How did the song come together?

Kem: Well they actually wrote it together. They sent it to me, probably in 2015 or 2016. I didn’t write to it until a couple of years ago. I really sat on it for a long time. Once I put my pen to it, the rest is history. The song is really based on conversations I had with my wife Erica before we got married. It’s about trying to be transparent in our relationship and putting everything on the table. That’s really what the context of the song is. I couldn’t be happier, it just feels really good to be back at it at radio and to have people embrace the new music.

YouKnowIGotSoul: Love the song and the groove on it. It just makes you feel good.

Kem: It was produced by Derek “DOA” Allen. He’s really been an incredible partner to work with on this record. I sent him the chords and I sent him the hook, and he just built this track around it that really is reminiscent to me of an Earth, Wind, & Fire groove. I just dug it right from the start. I had been cutting vocals for a couple of years, so I knew this was one of the standouts on the album. We’re really pleased.

YouKnowIGotSoul: The song is just another example of how you’re able to evolve your signature sound.

Kem: You aint heard nothin yet! *Laughs* Oh my gosh. I started out with the “Kemistry” album, and all of my albums had a rhythm section. Bass, drums, keys, guitar, and there is nothing wrong with that. You set the tone of being able to create music in the tradition of R&B. This album is probably the most progressive, most contemporary, edgy, current production that I’ve ever done. In fact, so much so that I went to try to cut bass, drums, and keys. I was at the studio in Detroit, and we were cutting these songs the way that I’ve been cutting them over the years. It was not it. We had to put the production around the songs to serve the songs. This album is swinging! We’ve been to do it in a way that’s still me, it’s still Kem. It’s not pushing the envelope so much that the essence of what I do is lost. It’s really, really fresh. It’s competitive. I feel really good about it. At this stage of my career, I’ve been doing it almost 20 years. I love all of my music, but let me see how I can color. Let’s play with this and dance a little bit. I really can’t wait to let people get a taste of the entire project.

YouKnowIGotSoul: Interested to hear what this sounds like from a production standpoint. When we hear current, we can’t help but think of trap!

Kem: No, definitely not. There is a lot more programming. This is probably the most uptempo songs I’ve had on one album, than I’ve probably had on all of my records combined! *Laughs* There is probably 3 or 4 good uptempo records. I’ve got Toni Braxton on a duet, I’ve got Erica Campbell on a duet. I sent one of the songs out to Lenny Kravitz to get his take on the song. I’m working to put that together. This record is special.

YouKnowIGotSoul: It’s been almost 6 years since your last album “Promise to Love”. How did you know it was time to do another album?

Kem: It’s time. It’s time. I take time making my records, but I don’t plan it that way. Life happens. I got married, we added children to our situation, bought a house, moved across the country, changed my management team. It’s been so much going on. It was time. Some would probably say that the record is overdue, which I think they come in their seasons. This is the perfect season for this album. I think that this record is going to touch a lot of people. It will help fill in the gaps with all that is going on today.

YouKnowIGotSoul: With being married and having children, how has your approach changed to creating music and being a musician?

Kem: *Laughs* I’m recording at home for the first time in my life. I’m on with you and sitting on a chair underneath my microphone. After this, I’ll go back to finish these vocals to meet our deadline in a couple of weeks. I’m at home with the kids in the house. We’re all here sheltering in place. I’m mixing as we speak. They’re working on it in Los Angeles and sending me a reference. It’s a new day at Kemistry Records. *Laughs* The way that it’s come together is really what never gets lost. My stamp on making sure that everything is in place. I guess that’s what I’ve learned over the years. It doesn’t matter what the process is, it matters that you get the results you were looking for. We are accomplishing that and happy with that.

YouKnowIGotSoul: You’ve become known for your outstanding live show and you always pack the house. How are you holding up with the shelter in place and not being able to perform?

Kem: Yea it’s rough. I miss being out on the road. I like traveling. I like being at home too, but I like the hotels and all of that and hitting my favorite food spots in different cities. I look at it is an opportunity. When we come back out, people will be ready to see us. We will be ready to perform. When all of that energy meets, it should be epic. By the time we are on the road again, the album will be out, and people will hopefully be ready and waiting for the new music.

YouKnowIGotSoul: Take us back to the beginning of your journey. It’s been epic to watch you grow over the years, after starting out self-funding your own album and grinding to make it.

Kem: My wife always ask me if I still get excited. I’m still excited now recording this project. I still have the same feeling and energy and desire to really just be the best that I can be in the business. Those early days were special when I was selling my first album “Kemistry” out of my trunk. I was making CD’s and selling records going to the record stores and the mom and pops and putting my records in the stores myself on consignment. I’d be getting a royalty check and it all came to me. I was just trying to put my record out, I didn’t know about any of that. It was a real exciting time and I try to not take it for granted, and keep the same hunger. We still operate like an independent even though we’re on a label. I haven’t had a real job since 2000! I can’t be mad at that.

YouKnowIGotSoul: Once you were doing it all on your own, how did you get discovered and signed to Motown?

Kem: We were in negotiation with Motown for about 8 months after I released “Kemistry” on my own. I had the bar code on the back of the CD of mine. I read up and figured out how to do that. Every time one sold, there was a blip on somebody’s radar. Just like whoever else was making records at the time. I looked at myself as being in competition with everybody. We were selling records, we were on the radio. We weren’t moving a lot, but for somebody not signed to be charting. Motown reached out, somebody at the label as at a BBQ and heard the record and asked about it. I went to New York to meet Kedar Massenburg. I dragged my keyboard. *Laughs* I’m in New York City walking down the street with my keyboard. The rest is history. We’ve been rolling ever since.