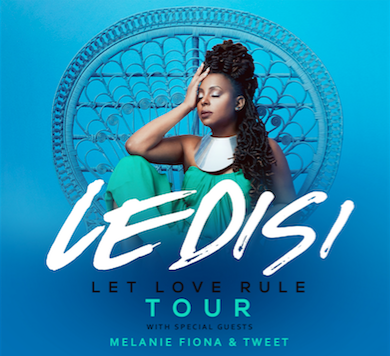 R&B legend Ledisi has just announced that she will head out on the road for her headlining “Let Love Rule” tour. The 17 city tour will kick off May 24th and make stops including Boston, Nashville, Cleveland, Cincinnati and more.

Also joining Ledisi on this journey will be Melanie Fiona and Tweet. Ledisi will be performing songs off her new GRAMMY® nominated album Let Love Rule, which received nominations in the “Best R&B Album,” “Best R&B Performance,” and “Best Traditional R&B Performance” categories at this year’s ceremony. VIP presale tickets are available on Wednesday, Feb 28th.

Ledisi recently released her Grammy nominated single “All the Way”, based on requests from fans and is steadily making its way up the Billboard Adult R&B Song and the Media Base Radio charts. The single has been picking up lots of movement as it had a “Hot Shot Debut” at #24 and now sits at #20 with airplay in Los Angeles, Chicago, Detroit, Philadelphia, as well as SiriusXM Heart & Soul and Music Choice R&B Soul.

Before setting out on her new tour, Ledisi will appear at the Apollo Theater for a special one night only concert celebrating artist, activist and Apollo legend Nina Simone with Nina and Me: Ledisi Celebrates Nina Simone Live at the Apollo on March 9. The evening will feature Ledisi performing the timeless music of Nina Simone alongside some of her own, chart-topping hits.