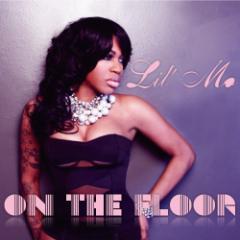 Lil’ Mo has just released her new single called “On the Floor to create anticipation for her upcoming album this Summer.