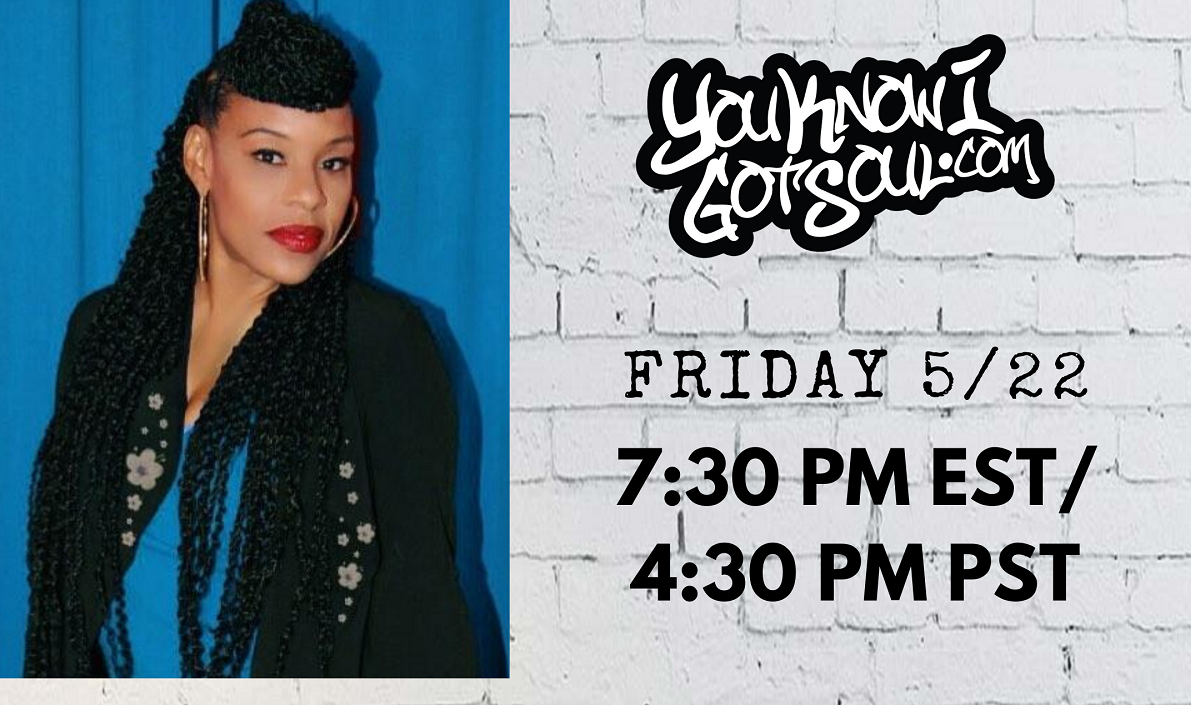 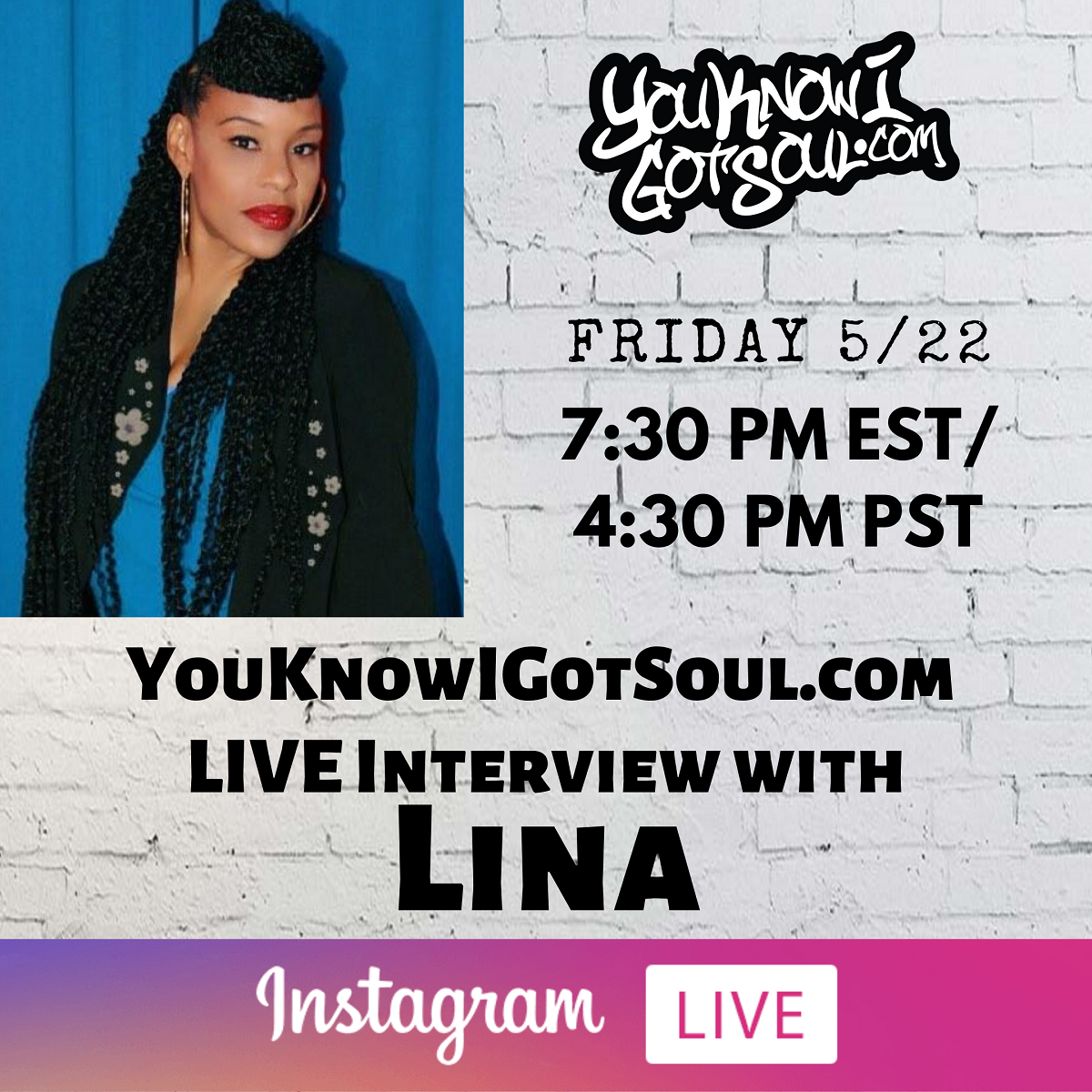 We recently caught up with Lina for an interview on Instagram Live. During our conversation, we touched on how she originally got signed to Atlantic Records, her debut album “Stranger on Earth”, her unique soul/swing/jazz style, writing for Tyrese, her second album “The Inner Beauty Movement”, and much more.

YouKnowIGotSoul: Take us back to the beginning. Can you share the story of how you originally got signed to Atlantic Records?

Lina: It was really interesting. Even back then I had these aspirations of having my own label, and as a female that was rare. So what I did is I started recording songs and taking pictures on my own, just having friends style me. We ended up with this 8 song EP, we made a picture, and we put it together. I had just moved from Texas to North Hollywood. We started doing shows around town. The first label that was interested was called Priority, and it was all rappers. After that, it was Jive, but a few labels came to the table. It was a bidding war, and Atlantic came to the table last. My manager at the time thought this label got me. Craig Kallman (Atlantic Records CEO) was a DJ, so he actually inspired me to name the first album “Stranger on Earth”. He introduced me to a song called that. He had all of these Jazz records and Swing records, and it was exactly what I was into, so it was a good match for me. He really did get it. We decided to go with Atlantic Records. I would have gone with Priority, but they had only rappers. Craig actually came to the house, it was crazy! Andre Harrell came to the house. Executives were actually coming to our house before we signed.

YouKnowIGotSoul: Before your debut album even came out, you were writing for other artists, like Tyrese. What was that whole experience like?

Lina: There was a label that Tyrese and I were both interested in signing to. That’s where I met him. That was before he got his Coke commercial. It was in Hollywood, we were really young, and I met him then. So when I met this other group of producers, they were a boy group at one point, and they were up in New York. I went to New York for my first time, and I started writing for artists on Mariah Carey’s label as well. I wrote the song for Tyrese, I just stayed in New York in a writing camp for month. The song for Tyrese is called “Aint Nothing Like a Jones”, and my background vocals got to stay on there. I was really excited because that was my first real exposure in the music industry.

YouKnowIGotSoul: Talk about your debut album “Stranger on Earth”. What do you remember about creating that project?

Lina: It was one of those things I didn’t think would ever get heard. That’s why I was so free and uninhibited. I didn’t think anybody would ever hear this. All I was doing was putting sounds together that I loved, I didn’t follow any rules. Because I love Sarah Vaughn and that whole Cotton Club era. My mom sang Jazz and my dad was a blues singer. Then I went off to school and got introduced to Etta James and all of these great Jazz musicians on the East Coast. When I got back home and moved to California, I was into Jay-Z and 2Pac, so I love the beats. I wanted to keep that vintage sound. I put together all of those sounds and just started singing. I had a scholarship to sing Opera at Howard University. I just put that together, had these songs recorded, met this producer named Travis, he got it, and then there was a guy who played in an independent cover band I was in, to make our rent. His name was Jeeve, he was from France. When it came to producing the music, there was this kid out of Hollywood, he hadn’t done any projects. I heard him and he got it. I told him what I was interested in, and then I told him the Benny Goodman band was one of my favorites. He went home, and within 3 or 4 hours, he sent me a track. He sent the track to me on a CD and within 30 minutes, I had wrote that song, and it ended up being “Playa No More”. It was opera, it was hip hop, and Craig Kallman loved it. Basically that song was why the labels were interested. That was the first single.

YouKnowIGotSoul: You had so many songs on that album that could have been singles. We really liked the songs “Bye Bye Baby” and “Waiting”.

Lina: Thank you, I do hear that a lot about those two songs. With “Bye Bye Baby”, there is a group of producers that DJ Jazzy Jeff had, A Touch of Jazz. Keith Pelzer and Ivan Barias and all of them. I was just writing with them. The track “Bye Bye Baby”, Ivan Barias created and sent it to me. He hadn’t heard what I was doing yet, it was just a track he had in his catalog. I heard it and I liked it. At the time a lot of people didn’t get what I was doing until I put vocals on it. I didn’t have a record deal at the time either. It was just something I picked out of the catalog. I actually met Jill Scott over there before she got signed, and eventually we ended up label mates at Hidden Beach. I think she was teaching at the time, she was real cool, but she was really about her business. She was talking to me about publishing, she was on top of it! That’s where that song came from. “Waiting” was produced by Jeeve. A friend of mine was in the studio and he liked the track. Once I put on the track, I started vibing to it and recorded it. I hear a lot from people that those songs are some of their favorites. It was just timing. I think the album got stunted growth, because you know 9/11 happened, and the date of release of my album was 9/28. It was like what’s going on now, nobody is leaving home, everybody was scared, it was like those times.

YouKnowIGotSoul: Eventually you left Atlantic Records and ended up at Hidden Beach Records. What was the process like of moving between labels?

Lina: It was a little bit dark. At Atlantic Records we were like family. All of the support I had from that label, and the press. We were setting up for this release date. I had already been out on the road with Guru and Joan Osborn and Craig David in the UK. We had really set up this album. We had tour dates set to start around the time when the album was set to release. We started supporting the album and the next week when we had our major tours, we couldn’t go anywhere, we couldn’t fly. It was a scary time, nobody knew what was happening! I remember where I was when the planes crashed into the buildings. I used to take the World Trade Center stop to and from New York. This time I had just happened to be in L.A. Any artist who came out around that time, we couldn’t support our record. The moral was down, it was a dark time. But I actually didn’t get dropped, I asked to be released, and the label let me go. I had heard stories about being shelved, but I started thinking about the Neo-Soul movement. I didn’t know where I could fit, it wasn’t R&B, or Jazz, or Neo-Soul or Hip-Hop. It had all of the elements. I was kind of an outcast in the industry. I’d get booked on shows and I’d feel like my peers didn’t consider me one of them. What happened is, after I signed with Hidden Beach, my same manager and producer introduced me to Steve McKeever. So Skip Miller ended up becoming my manager, he used to manage the Jackson’s at Motown. He introduced me to Stevie Wonder and all of these people. People loved the music. Stevie even co-signed the single “Smooth” once I signed to Hidden Beach. The Grammy’s introduce an entry for artists like me. Skip knew they did it for me, it was alternative R&B, it’s a category that’s not there anymore! I got four nominations for my album “The Inner Beauty Movement” album. I think Jill Scott later on won in that category, and artists like Ledisi. Just unique and amazing artists.