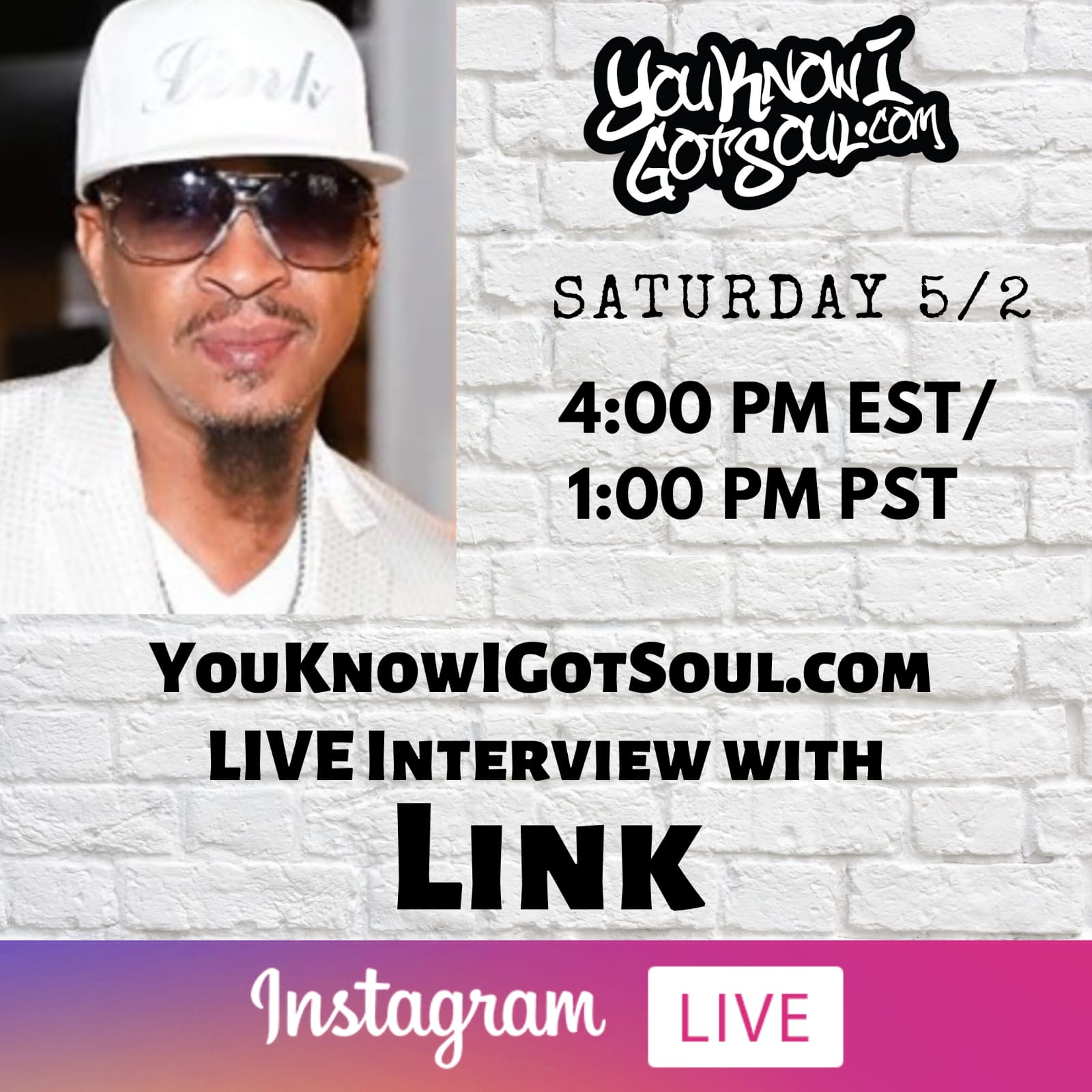 We had a chance to interview 90’s R&B singer Link. Some may remember him as he came out with the hit single “Whatcha Gone Do?” along with the very underrated album “Sex Down” back in 1998. However, some may not know that he co-wrote the classic LSG record “My Body”.

We also touch on his sophomore album “Creepin” which he put out independently in 2008. We talked about the challenges for an artist to release music when they’re no longer signed to a major label.

Lastly, YouKnowIGotSoul also caught up with Link to find out what he’s up today and whether he plans on releasing hew music in 2020. Watch the video for the full interview!

YouKnowIGotSoul: Talk about that chemistry that you have with Darrell “Delite” Allamby because you guys have done so much together including “My Body” by LSG.

Link: You know what’s crazy? We had chemistry right off the bat man. We had a mutual friend named Leonard and Leonard used to always talk to me about Delite. It finally happened and literally within minutes of us being introduced to each other, we wrote a song in like the first five minutes of meeting each other. That’s no lie, man. He was playing on the keyboard and I was sitting there listening. I was like “Yo, I got something that’ll fit with that”. Immediately we meshed and from then on man, we would make a lot of good music good together.

YouKnowIGotSoul: You guys created the classic LSG record together. Talk about creating it.

Link: It was crazy man. Delight actually had the track and he would play me the music. I was like “I don’t know about that” because at the time the music was so different. We’re talking like 1997. He said “Let’s flip it. I don’t want it to be a traditional R&B song. Let’s add a little Bone Thugs-N-Harmony and the way they flip their rap lyrics”. So we just got in the room and magic happened. I was shocked especially from where it started from with me because I did not like that track in the beginning.

YouKnowIGotSoul: Did you know you were originally writing it for LSG?

Link: It was originally my song. It was on my demo that I shopped. It was not originally for that LSG. What happened was in the midst of shopping my demo, LSG had already completed their album, Delight had a great relationship with Elektra records, so naturally he went there to shop my demo and in listening to my demo, it was like “We need that song for LSG”. So they literally came at me for about three or four months trying to get that song from me. I was like “No, you can’t have it”. Eventually I sat down with my team and they were like “We can’t tell you what to do, but from a business standpoint, if you allow LSG to bump that record, it’s going to do great things for you as a writer and as an artist as well”. I finally relented and LSG broke me off as an artist. I reluctantly gave it to them. *Laughs*

YouKnowIGotSoul: If you released it yourself, I’m sure the song would have done well. However LSG at the time had such a massive audience though. I guess you lose out in the short run, but your publishing on that song must be crazy today.

Link: Right, right. I’m still blessed today to be able to still be receiving publishing from the record because it was such a great record. With legends like Gerald Levert, Keith Sweat and Johnny Gill who had already had this enormous following and the hype around them forming this group had become so enormous, it took the record probably to a place that me being a new artist, I may not have been able to take it to that and because of that people still listen to the record today and because the record is still being played today and being listened to today, my publishing is still flowing.

Link: They did a great job with it. It sounds dope. There have been a lot of people who kind of played off of “My Body” a little bit, but these are the first guys who really sampled the song. I’m hoping that the record does well.

YouKnowIGotSoul: Take me back to your debut album “Sex Down”.

Link: When I got ready to to come out and work on the music, Delite was like I’m going to make you a sex symbol”. I was like “You don’t have to do that. At the time the only person who was really on that vibe like that was R Kelly so we just said “Let’s follow that little blueprint right there and try to take it to another level man”. We said we were going to go as close to the edge as we possibly could go without going over it and just trying to continue to bang out those records that had a connotation of sex, but clean. It wasn’t nasty or dirty, but adult like when you’re in the mood, this would be one of the records that they were going to put on to help capture that vibe. I was a little afraid in the beginning. I was like “Man, what is my mom gonna say when she hears?”. She actually enjoyed the music and signed off on it, so I was cool.

YouKnowIGotSoul: Talk about your hit single “Whatcha Gone Do?”.

Link: We just sat down with again with that blueprint of edginess. We banged it out and we wanted to make it as catchy as possible because it was the first thing that anybody was going to ever hear from me. So it had to be a little edgy. That was my most successful single as far as charting and sales.

YouKnowIGotSoul: Who came up with the infamous line “How would you like it if I hit you wit a 69”?

Link: I really believe that was on Delite. They came up with that line already. I had to add that “Can I hit it from the back? Do you like it like that?”. We were all pushing the envelope and it worked. We got away with it.

YouKnowIGotSoul: Talk about your 2008 album “Creepin”.

Link: It was totally different from when I had been signed in 1998 because the labels did everything for you. When I dropped “Creepin” in 20O8, it wasn’t like that. You had to do everything on your own and that was a that was a big adjustment for me because the label did everything for me. It took me a few years to get out of my contract, regroup and form my own company now. I had to come up with the budget to be able to make it happen. It was it was tough man tough, but I finally got it done. I thought the music was pretty good. I’m not going to compare it to “Sex Down” because “Sex Down” is a classic, but I wanted to at least make make it as close to it as possible. It’s just unfortunate that I did not have the machine that I needed to promote that record.