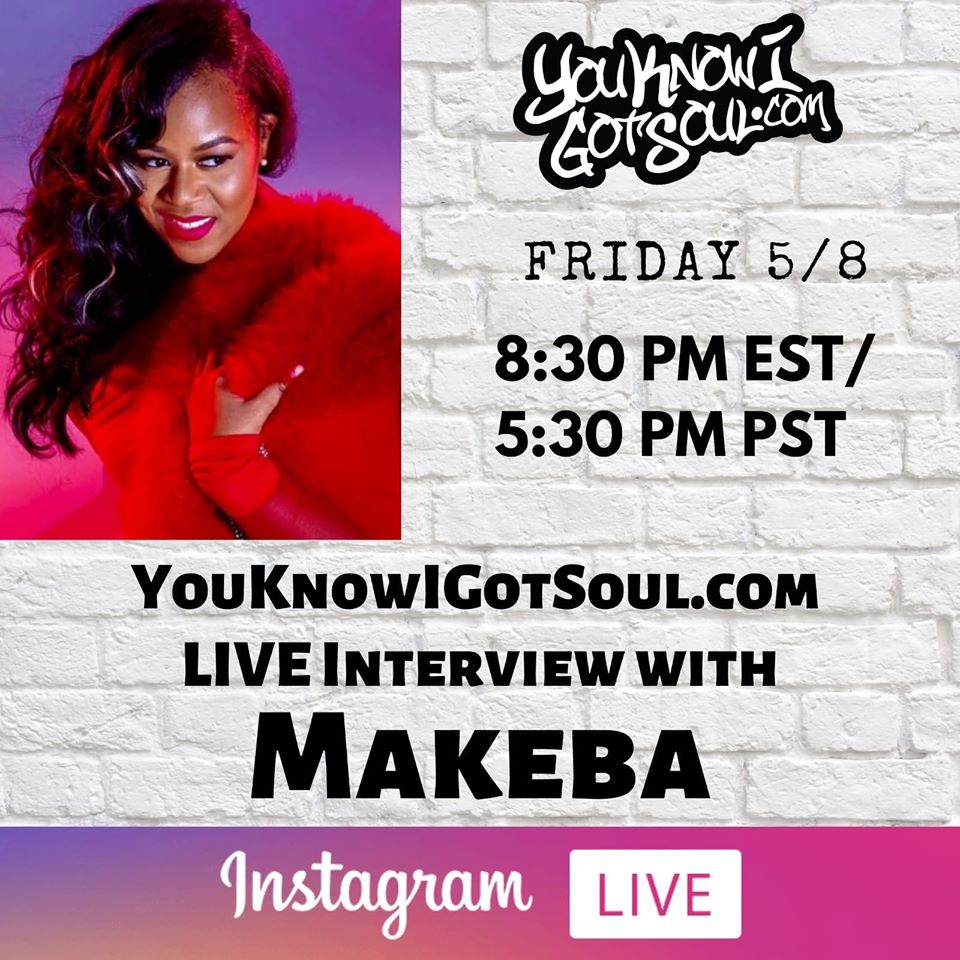 We recently caught up with hit songwriter Makeba Riddick for an interview on Instagram Live. During our conversation, we talked about some of her early placements including the Jennifer Lopez and LL Cool J hit “All I Have”. We also talk about her work with Beyonce, Rihanna And Tamar Braxton. Lastly we talk about her adapting and figuring out her sound as R&B has evolved.

YouKnowIGotSoul: Take me through the early beginnings of your career and your first hit “All I Have” by Jennifer Lopez.

Makeba Riddick: That was at the beginning of my career. I was just writing around New York and writing with a lot of different producers. I was just trying to get placements on different artists. I had been writing for B2K and 3LW. They were all signed to Epic at the time. The executive A&R at Epic heard my demo CD and was like “You’re dope, but I bet you can’t write me a single for Jennifer Lopez”. We all laughed about it and a friend of mine and I were just playing around in a studio in Brooklyn one day. We had this track from Ron G who was a popping DJ in New York at the time. We wrote this record playing around and it got to the hands of Cory Rooney. He was Jennifer Lopez’s main vocal producer at the time and he loved the record. He called me like “Jennifer wants to cut this record. I need you down here”. I just couldn’t believe it because Jennifer Lopez was going to cut my record. I didn’t know when she cut it, but I heard it on the radio. That was my first single to ever come out to radio and it did what it did. It went number one all over the world. It was a huge record for my career.

YouKnowIGotSoul: Did the doors open right away after “All I Have” or did you still have to grind?

Makeba Riddick: The doors did not. Even though I had a number one record, it was still grind time. It was still time for me to grind and use that to meet more producers and travel. I just started traveling a lot more because I was working with producers internationally. I was going to Sweden and London to work with producers. I still had to grind for another three years before I got my real big break.

YouKnowIGotSoul: A lot of people know about your work on Beyonce’s “B’Day” album. How did you get introduced to that camp?

Makeba Riddick: I had been working with Darkchild two years prior before to the “B’Day” album. We were working on a bunch of different stuff. Adonis was there as well as LaShawn Daniels. God rest his soul. We just had a ball writing for three weeks and it wasn’t until a year and a half later that I got the call. They found this record I co-wrote called “Deja Vu” that Beyonce wanted to cut. When I went in to finish that record with her, we just hit it off and the synergy was there. She wanted me to stay and help them write the rest of the album.

YouKnowIGotSoul: Talk about the synergy in the camp with the other songwriters and producers while working on the the B’Day album.

Makeba Riddick: It was about ten of us in Sony studios. We camped out there. Rodney and his crew were in one room, Swizz Beats and Sean Garrett were in another room and then me, Beyonce, Solange and Angie were in another room. It was friendly competition to see who could come up with the dopest records. At the end of each day, we were playing them for each other. It was a wonderful time creating that album.

YouKnowIGotSoul: Talk about working with artists like Rihanna and Beyonce on multiple albums. What’s your approach to making sure that you’re catching up with their evolution as artists?

Makeba Riddick: I just try to follow their lead. Wherever the artist wants to go, I try to help them push the needle even further. I believe that every artist has to evolve. With Rihanna because I worked on so many of her albums, every album was a step up. It was a different evolution of her as an artist and it was process. You study different records and producers. It was really a process of helping her get to that next level.

YouKnowIGotSoul: You started having massive hits after that “B’Day” album. Did something click for you?

Makeba Riddick: There was a period where I was on a serious run. I had the number one records in R&B, Pop and Dance all at the same time. The momentum just didn’t stop at the time. Of course over the years, when we go through life changes like I got married and I have children now, you go through life. for me, I was blessed in that I was able to jump into a different genre and have hits on different charts. I was able to jump from the Pop charts to having a number one Dance album that was nominated for five or six GRAMMY’S. You have to know that the momentum is going to change throughout your career. It’s not always going to be hot and things happen. In life you’ll do different things and you’ll be in a different place, so you have to be able to pace yourself.

YouKnowIGotSoul: Of course you’ve done a lot of work with Tamar Braxton. .The song “Love & War” will probably end up being an R&B classic. Talk about the creation of that song

Makeba Riddick: That’s a special song because not only was it a huge number one record, but it also established Tamar as an artist because she went through so many different records and she tried to find so many records. “Love & War” was the record that defined her and gave her a sound. It let the world know that a new superstar was born. It’s funny because the same day we wrote “Love & War”, we wrote a song called “Hot Sugar” during those sessions. It was an uptempo off that album and we all thought that was going to be the one that was going to take off at radio. But “Love & War” and the reach of it was so strong because it was so sincere. It was written from a real conversation, so that’s why I talk about authenticity being important because it always wins.