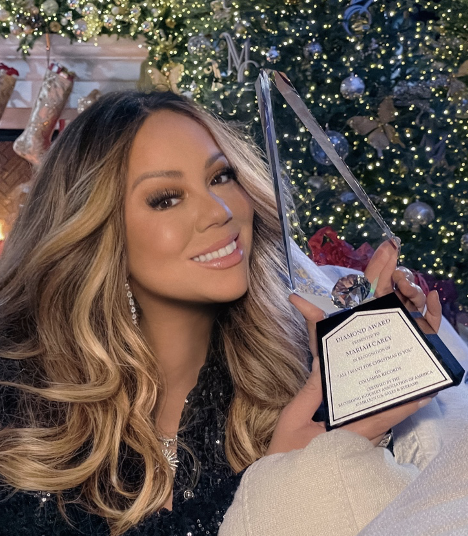 The “Queen of Christmas” Mariah Carey is celebrating yet another accolade with her timeless holiday classic “All I Want For Christmas Is You”.

This December, “All I Want for Christmas is You” has already become the first and only holiday single to secure the RIAA’s prestigious Diamond Award, which signifies ten million sales and streaming units in the United States.

“The continued love for my song never ceases to amaze me and fill my heart with a multitude of emotions,” said Mariah. “It blows my mind that ‘All I Want for Christmas is You’ has endured different eras of the music industry. The RIAA DIAMOND award?! Wowww! I’m so fortunate to have the greatest fans on Earth, my Lambily, who continue to support my legacy. I love you.”

“All I Want For Christmas Is You” will also be celebrated in the Apple TV+ show Mariah Carey’s Magical Christmas Special, with a show-stopping performance of the record-breaking song, along with her twins, son Moroccan and daughter Monroe. Carey also debuts her all-new holiday extravaganza Mariah’s Christmas: The Magic Continues, premiering globally today and available now on Apple TV+.

Recently, it was also revealed that Billboard named Mariah Carey’s “All I Want for Christmas is You” as the #1 record on their Greatest of All Time Holiday 100 Songs list.

Recorded in August 1994 at The Hit Factory in New York, “All I Want for Christmas is You” was originally released in October 1994 as the first single from Mariah’s Merry Christmas album.