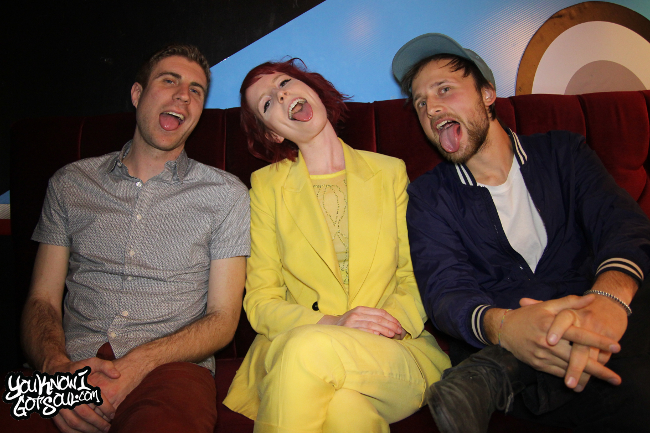 Max, Amber and Andris, better known as Moonchild, have been buzzing on the internet for quite some time now. Thanks to their musicianship and smooth vocals, they’ve found a home in R&B as they’ve been able to capture that Neo Soul sound that R&B fans have been missing. Their single “Cure” was found on many R&B playlists last year and their latest album “Voyager” has received a lot of critical acclaim from various websites. YouKnowIGotSoul had a chance to speak to the trio about their journey in the industry from the release of their three albums to the co-signs that they have received from the likes of Jill Scott, Robert Glasper and 9th Wonder. We also talk about life on the road and how they’ve been able to reach the R&B crowd with their music.

Andris: We started writing it when we were touring our second album. The entire record took about three years to make. The bulk of it got finished at this cabin in Lake Arrowhead that Max’s girlfriend owns. It was a sweet deal because we could just go out there for a week and work on music together in the same house, which we didn’t get to do on previous albums

Amber: We all kind of write separately in our own space. We all have recording setups in our house, so we’ll email ideas to each other and different people will add things. It was nice to be in the same space and just to be able to walk downstairs and be like “I added a verse to this thing. Do you like it?”. We just bounced things off each other that way.

Max: And then we did a bunch of sessions at our friend’s studio which tied a bunch of the songs together. There’s a bunch of harp, strings and guitars on the album. All of those finishing touches added a lot and made the album more cohesive.

YouKnowIGotSoul: Talk about “Cure” and how that song came together.

Amber: That’s Andris’ beat and he sent me just the chorus part. I wrote the hook and Andris wrote some different chords for the verse.

Andris: I was listening to a lot of King and D’Angelo. Some of the chord movements were really inspired by “Another Life” by D’Angelo. Amber came up with some cool shit over it.

YouKnowIGotSoul: You guys were able to capture that Neo Soul vibe. Talk about the process of getting to that point.

Max: All three of us just love listening to music. When we heard Neo Soul and soul music around the time we were in college, we were obsessed. We all have this sponge-like characteristic where whatever we’re listening to, we absorb it over time. So for the past ten years, we’ve been listening to soul music and we just absorbed what it’s all about with the grooves and chords. We’re just trying to write something new with that.

Amber: Yeah, we don’t really think too clinically about it. It’s just making music that we like that’s inspired by what we listen to.

YouKnowIGotSoul: Was there a certain moment that let you guys know that you were going to be able to pursue a music career long term?

Amber: When we made the first album, we just enjoyed writing with each other and we were like “Let’s see if we can make an album”. Andris did some videos for us and when we released the videos, it was back before Instagram and people were just sharing videos on Facebook. They reached a lot more people than we expected. I was like “Maybe we have something going on”, so we decided to keep making albums and keep writing together. This year has been better than ever. We’ve also had help from a lot of people who we very luckily reached like Jill Scott, Jazzy Jeff and 9th Wonder. They’ve been so supportive and kind of shared our music with their fans. That’s helped us so much.

Andris: We’re super lucky with getting a good team to help us grow. Our manager has been super helpful for us offering advice and getting us to certain places. Because we kind of make these records the three of us on our own, it makes it way easier when it comes time to make a record. The only cost for us is time basically and mastering. When that stuff all gets put together, it’s very sustainable for us to keep pushing on. It’s not like we’re necessarily losing money doing this music.

Amber: There’s also a big scene of Neo Soul lovers. There are different channels and radio DJs like Neo Soul Cafe, these people are dedicated to finding new Neo Soul music and they’re so supportive. They share it with all their friends, so that’s been really helpful.

YouKnowIGotSoul: What do you think has drawn fans to your music?

Andris: It’s so hard to say from the inside. People tell us the qualities they like, but I think we just make the music that we’re hearing and we feel fortunate that people resonate with it.

YouKnowIGotSoul: You’ve gotten some cool co-signs like Jill Scott. What does that mean to have that from artists who have already made it?

Amber: It’s really encouraging. I think everyone feels like if their hero gives them approval, it’s like “Let’s keep going!”.

Andris: They probably hear so much new music, so anytime you get to hear any word of encouraging is amazing.

YouKnowIGotSoul: You guys don’t look like the typical Neo Soul group. What’s the response been like when fans see you live for the first time?

Amber: Most people are surprised that we play horns. I think when you listen to album, you can’t tell that everyone does a lot of different stuff. A common comment is that “I didn’t know you guys were horn players too!”. That’s how we actually started out. We’re inspired by Neo Soul, Jazz and R&B.

YouKnowIGotSoul: Talk about some of your influences growing up. I know D’Angelo is one of them.

Amber: The first time I heard D’Angelo, I was like “Where has this music been my whole life? This is the music I’ve been looking for”. Then we found Erykah Badu, Jill Scott, Emily King, King, Hiatus Kaiyote, Stevie Wonder and Earth, Wind & Fire.

Andris: It’s been the most awesome thing living in this era of Spotify and digital music because like Amber said, we didn’t discover this music until we were in college. We were super late on the whole soul thing, but we finally discovered it and it’s like “Wow there’s catalog of dope shit that we can listen to”. I feel like there’s still so much to listen to that’s already been released. It’s a beautiful time for music lovers just to indulge in so many cool things.

YouKnowIGotSoul: Another co-sign you guys got was from Jazzy Jeff. That music have been big for you right?

Amber: He’s been so good to us. We’re so appreciative.

YouKnowIGotSoul: Talk about the grind before this album came out. Talk about being on the road and doing shows. Was that an adjustment for you guy?

Andris: It’s all sort of been gradual. The first project we put out, we didn’t really do any touring except for the West Coast because we’re all from there and we could just stay with our families. The second album was the first time we noticed people that were checking us out so we did an East Coast runs. “Voyager” feels like another tier and we’ve reached a lot of people, which is awesome. We were able to go to Europe last year for the first time.

Amber: It’s a grind but we all get along so well. It’s a good hang and I think we realized “Oh, this is work. It’s not like vacation”. When you haven’t toured, it’s like “We get to see the world” but you’re actually working and trying to stay healthy. I feel like after last year, we kind of have a good groove going.

YouKnowIGotSoul: It seems like you guys are just having fun with creating music. Do you think that’s the key to the success you guys have been having?

Amber: I really do. I think that people can hear in the music what you love and you’re not trying for anything. A lot of people ask what the direction for the new album is, but we’re just going off whatever new music came out and inspired us this year or any new sounds or technology. We’re just trying to use that.

YouKnowIGotSoul: Your demographic seems to be an older crowd, so how have you been able to reach those fans? I know a lot of Neo Soul fans aren’t necessarily on the internet all the time.

Andris: I think it’s a combination of show or word of the mouth. I think a few stuff like Neo Soul Cafe which has like 30,000 members. Local record store owners that find our music and contact us personally, we’ll send them 50 CDs. It’s been very much because of those people who have been like “You have to listen to this band” that we’re able to tour in cities that we haven’t really been in before.