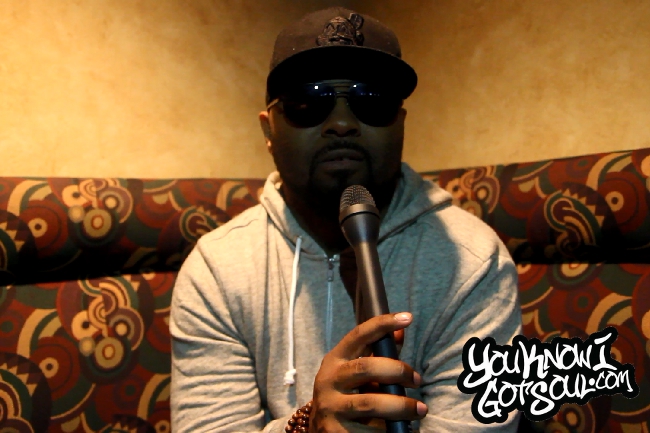 Musiq Soulchild has always been praised in the past, but it seems like recently he’s received backlash for his personas The Husel and Purple Wonderluv. It almost seems foreign to see such negativity for an artist who has consistently put out great albums throughout his entire career with classic singles such as “Love” and “Don’t Change”. YouKnowIGotSoulSoul spoke to Musiq about the negative comments on YouTube regarding his new music and he gave us some insight into his mindset with the new music he’s been creating.

YouKnowIGotSoul: Talk about when you realized that you wanted to pursue your persona projects.

Musiq Soulchild: I’ve always wanted to do it. I just never got the support that I was looking for until one day I stopped looking for the support and started doing it myself. Ironically that’s when I started getting support and most notable you guys, so I really appreciate the support from you guys. I mentioned off camera that I wasn’t interested in doing any media for it, but if there’s an audience then it helps to give them some kind of explanation or background or some indication of what’s going on, so it’ll help their experience be that much more enhanced. I wasn’t opposed to it, but I just wasn’t interested in the game. Tom Leo, he misses me with the crap and I appreciate that. A lot of people misinterpret the whole Husel thing. I think they only have their own personal references to their own point of view when it comes to trying to understand what’s happening despite whatever I may say countless times. I don’t know how many times I have mentioned what it was and it’s still being taken out of context. That’s why I haven’t said much about The Husel anymore. I’m actually working on a tour. I would much rather do a show and invite you guys to the show, so you can see what it is. Maybe that will help you. Even still, as I keep saying it, it’s still in its developmental process. I don’t really have it all figured out. I’m going off a feeling and instinct. I’m going off accumulated information that I’ve gathered throughout the years. I’m just putting it out according to how it looks and sounds to me at the moment. It’s not a big mastermind plan and I don’t have an end gain. My end gain is doing it. Once I do something, that was the end gain and then I would come up with another one. I live moment to moment and I’ve acquired so much information in this business that I’ve learned that end of the day, what really matters is when you’re genuine, passionate and authentic with what you’re doing. Sometimes it’s not going to go over so well because it may be half baked sometimes, but at least you know it’s real. I know as a human being, they can identify with the reality that everything isn’t going to be perfect. It doesn’t mean it’s not good. And everything is not going to be for everybody. That doesn’t mean there isn’t an audience for it. I would rather not compromise to please everyone. I would rather stick to my guns and commit to my concepts. That way the people that are looking for it, they’ll know it’s straight up. It comes with stuff you just have to take and I have time for it. I’ve never been afraid of criticism or negative responses. According to my timeline, it’s the least of my worries. Someone’s opinion about me? It doesn’t really matter. It is what it is. However, I’m just grateful that I’m able to be a vehicle of inspiration. If there was an end gain, that would be it. I just want to inspire some folks in a positive way. If I can do that, then it was worth it.

YouKnowIGotSoul: Was there a reason why you started out with the Husel first? I know you had told us about Purple Wonderluv a few years ago, but we didn’t see that project come out until recently.

Musiq Soulchild: I wanted to start out with Purple Wonderluv first, but I felt The Husel, and I was quickly mistaken, that people wanted that. Only because of what was going on on the radio and everyone was turning up and using these sounds. I felt like that was what people wanted. I was only doing what I thought people wanted. They say “Follow the money! Follow the music!” Everyone was using those sounds. I didn’t want to be in the in crowd, but it was the concept of “Give the people what they’re asking for”. If people are turning up every day, then it’s like “Here!” Then when I put it out, they were like “We don’t want that!” I was just like “Why do you keep supporting it then?” *Laughs* So I was confused for a long time with that. Even though I’m using the same frequency, but I’m being more constructive with my content. I didn’t factor in that being positive was not cool. My bad. *Laughs* So I was like “if you guys want positivity, peace and love then here’s Purple Wonderluv”. I just put it out. I didn’t say anything or do anything. Everybody was like “This is amazing!” and I was just like “Thank you, but I’m literally doing the same thing with The Husel. The only thing that’s different is the music”.

YouKnowIGotSoul: I remember an earlier interview we did with you a few months ago where we read YouTube comments about the feedback for The Husel. There were some positive comments and some negative comments. What I want to do is read the first comment that came through for Purple Wonderluv. LaChele Wallace on YouTube said “If you had some common sense, you’d stop playing’ with these little personas and give Musiq a chance again” but a few days later, she said “I went back and relistened to your EP and I like 4 out of 7 songs. I guess I spoke too soon. Anyway, I hope it actually works this time and you don’t end up getting overlooked again”.

Musiq Soulchild: *Laughs* Are you serious? You’re the same person who just hated on it! This is why I say that this stuff is hilarious to me. It’s like “Do I listen to the comments?” It’s not really deep to me. But the Husel project, folks got so mad! But if you ask them why, they can’t really tell you. It’s always some variation of “We just want another Musiq Soulchild album” or “How could you do this to us?” or “What’s going wrong with you?” But then you listen to the music and they’re just like “I don’t need to listen to it!” Then your opinion is baseless and irrelevant. You didn’t even listen to it. By the way, The Husel is still here. I’m not stopping The Husel. It continues and it’s going to be for whoever it is for. I’m also doing Purple Wonderluv and I’m also doing Musiq Soulchild. We’re talking at a Musiq Soulchild concert. I know this is a lot to take in. But heasd up, it’s happening.