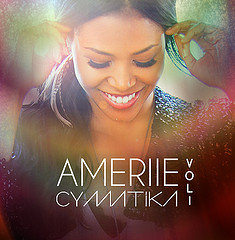 Even though she just released “In Love & War” last year, Amerie is already at work on here new project called “Cymatica Vol. 1. Cymatics.” She released this song last night via her twitter account as a sign of things to exepct from that new album.

This song sounds really good and I’m looking forward to more from her.

She has never been afraid to experiment musically and stray from her r&b roots, which she has been successful with at times, so you never know what you are going to get from her.