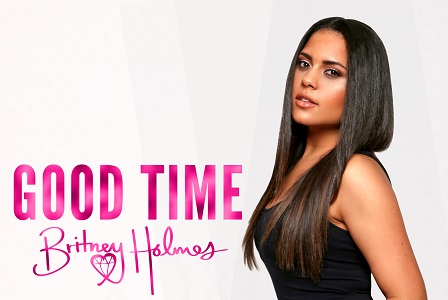 If this serves as your first taste of Britney Holmes, allow us to introduce you. On first listen of her new single “Good Time”, it should immediately take you back to a time in the late 90’s and early 00’s when pop and r&b had a great fusion going; and she does a great job of catching that vibe. We’re excited to hear more! Check out her full bio below.

Beginning as an actress in the PBS kids show “Wishbone” playing “Emily Barnes,” Britney developed a passion for music and singing. At the tender age of 11, she became the “National Anthem Queen” around Dallas, Texas singing at many professional athletic events like the Big 12 Championship and Dallas Mavericks basketball games. Soon after, Britney captured the attention of music mogul Johnny Wright, as she was once but is no longer signed to his label “Wire Records.” Wright quoted her as being “a true talent with vocals to sustain her in the industry for years.”

Press comments and articles quote Britney as having a “bluesy edge”, a “Demi Diva”, “a true songstress” (Dallas Morning News). She was also featured in STAR magazine quoting her as “ready to battle in the competitive world of music!” after meeting her at the 2003 Kid’s Choice Awards. Having been exposed to the great sounds of Motown growing up, her roots were quickly planted within Pop/R&B music. Influenced by such artists as Mariah Carey, Christina Aguilera and Aaliyah, Britney developed a unique sound of her own as well as a talent for songwriting.

Britney’s sound embodies “true singing”, an array of harmonies and backgrounds, and lyrics with substance. Because of her larger-than-life, driven and goal-oriented personality, Britney is capturing the attention of industry insiders not only for her vocal ability and talent to entertain, but also as a songwriter/vocal producer who is versatile and has a distinct style. The exposure and experience of the entertainment industry at such a young age has given this articulate, vibrant and determined young woman the ability to “hold her own” as a business woman, artist, songwriter, vocal producer and vocal coach. Britney has developed into one of today’s premiere young vocalists on the rise. From her recent feature on Jake Miller’s “Goodbye” to her contributions as a writer/vocal producer with many of today’s top producers, Britney is one to watch.