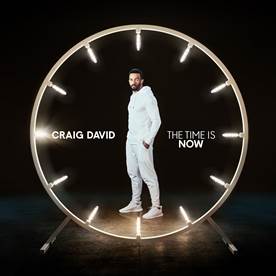 Despite having just released an album last year, veteran r&b singer Craig David is showing no signs of slowing down. In addition to releasing the brand new single “Heartline” today, he’s also announced the forthcoming album “The Time is Now” for release on January 27th, 2018.

The album is the following up to “Following My Intuition” which released late last year, and includes collaborations with Ella Mai, Kaytranada, GoldLink and more.

To go along with the announcement, Craig David included the following heartfelt message:

If the last few years have taught me anything, it’s that life can change in a moment and you’ve gotta make the most it!

Just in the same way my life was flipped upside down all those years ago, I’m genuinely so grateful to be standing here today doing what I love the most.

By doing the simple things that enrich my heart, I’ve found the same magic that got me into making music as a kid.

The motivation and inspiration behind this album was all down to the huge realisation that even when I wasn’t as focused, there were amazing lessons to be learnt.

Making the choice to dive in to the unknown, build TS5 from the ground up and work with a new wave of producers to focus on the only thing that matters NOW ..making great music for you.

This is authentic me, doing what I love, just like I did when I was an unknown artist – that kid from Southampton making mixtapes in his bedroom and taking risks.

TS5 has had a whole new meaning this year, for all of you that have been with me on this adventure, you’ve all played a huge part in how this album turned out.

Playing this new music live, I got the same buzz I did DJ’ing in clubs back in the day, testing the new tracks in my live sets – that was the making of ‘Born To Do It’.

This album is me going back to those days of simple story telling and waving the flag for UK R&B. It is for all of you that have been with me since those days, everyone that’s joined along the way and is here NOW.

I want to say thank you so much (yes YOU!) for being so loving and supportive of me on this musical journey we’re on!

I am eternally grateful!

So let’s live in the moment and always try to remember the time is now.