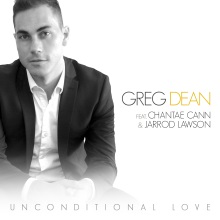 Allow us to introduce you to South African record producer, keyboardist and songwriter Greg Dean. “Unconditional Love” is his debut single and it features upcoming vocalists Chantae Cann and Jarrod Lawson. The song is being released through Purpose Music/Nia/Eone Distribution and is set to appear on his upcoming album “The Greg Dean Project” set to release in 2016. The album will include features from Eric Roberson, Carol Riddick, Gordon Chambers and more. Greg Dean has built up a reputation for himself as being the creative producer and writer behind the biggest musical talents out of South Africa.