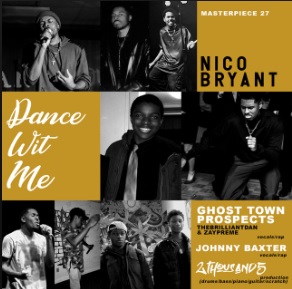 Check out the new single from Nico Bryant called “Dance Wit Me” featuring Ghost Town Prospects & Johnny Baxter. The Delaware native shows off his smoothed out vocals over the piano laden track. He adds his friends to the song to complete the vibe.

This is the lead single from Nico’s upcoming album with a video treatment to follow.

Nico Bryant is a singer, songwriter, producer, musician and actor. He blends R&B, Soul, Hip-Hop and Funk into a unique mix of music he calls “Jukebox Soul”. His main goal is to attempt to push the R&B genre forward while also paying homage to the greats who came before him. That mission was certainly accomplished on “Dance Wit Me”.

The singer began honing his craft in the church while also learning to play multiple instruments including drums and piano. He is now at the point where he can write, produce, record, engineer and mix all of his own material.

While not recording music, Nico is currently attending the University of the Arts in Philly as a Music Business, Entrepreneurship and Technology major.