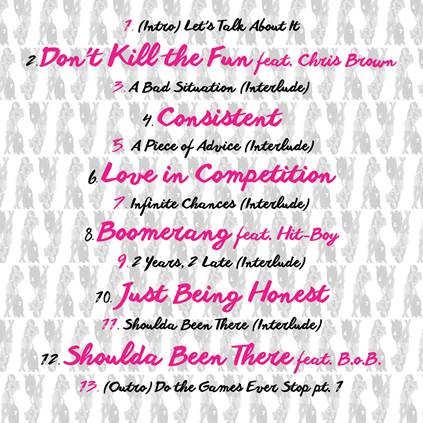 Acclaimed R&B singer/songwriter Sevyn Streeter has announced the release of new music SHOULDA BEEN THERE PT. 1, which will be available at all digital retailers on Friday, July 17. Today, she’s releasing the lead title track, “Shoulda Been There” feat. B.o.B. SHOULDA BEEN THERE PT 1 is a follow-up to Sevyn’s popular upbeat dance track “Don’t Kill The Fun” feat. Chris Brown, released earlier this year. The video was directed by and features Chris Brown.

Following the success of “Don’t Kill The Fun”, Sevyn most recently dropped an additional single, “4th Street” which serves as an uplifting tribute to her family in her hometown of Haines City, Florida. Earlier this year, Streeter was also featured on the critically acclaimed soundtrack for FURIOUS 7 with her song “How Bad Do You Want It”.

Sevyn also released an open letter to the fans to explain the release:

OPEN LETTER FROM SEVYN STREETER: “The last year and a half has been quite the roller coaster for me. Incredible highs and some dark lows. I wrote these songs when I wasn’t in the best space. Like I ALWAYS say, ‘I DON’T WRITE THE SONGS JUST FOR ME.’ I believe this collection of music can help someone else. So instead of me pretending, denying, and being embarrassed about what I went through, I’m choosing to put these songs out. As a creative being, I just had to release this music before my debut album in order to really move on with my life! So……consider this new project “SHOULDA BEEN THERE PT.1” the prelude or an appetizer before the main course. I hope you enjoy and please know that more is on the way.”-SEVYN STREETER