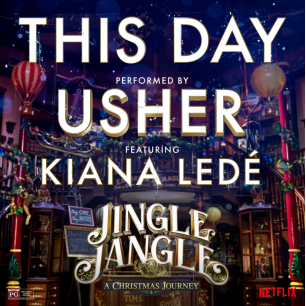 Usher links up with Kiana Lede for the new single “This Day”. The song is the lead single from the soundtrack to the upcoming holiday movie “Jingle Jangle: A Christmas Journey”.

The song was produced by the film’s executive music producer Harvey Mason Jr., along with Philip Lawrence, Davy Nathan and Joe London. The song is available now but the entire soundtrack will be out November 13th.

Usher added about recording the song for the movie:

“As a father, I jumped at the chance to be involved with a holiday film that’s both inspirational and inclusive. A film with a great message where my kids can see themselves reflected on the screen. Working with Kiana was a really great experience and I’m excited for people to hear this song.”

Be sure to check out the Netflix film “Jingle Jangle: A Christmas Journey” when it arrives soon.