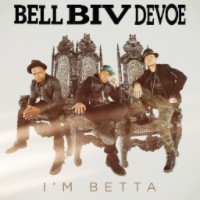 Just days after releasing their new single “I’m Betta”, Bell Biv DeVoe return with a visual to accompany the song. The song was produced by Kay Gee of Naughty by Nature and is the latest single from the group’s upcoming album “Three Stripes”, set to release Friday, January 27th, 2016.

The group will hope that “I’m Betta” will have the same success as the album’s first single “Run”, which has already made it to the top 10 at Urban A/C radio. The group has also released another song from the project, a duet with SWV called “Finally”.