New Video: Chaka Khan – I Love Myself (featuring B. Slade) 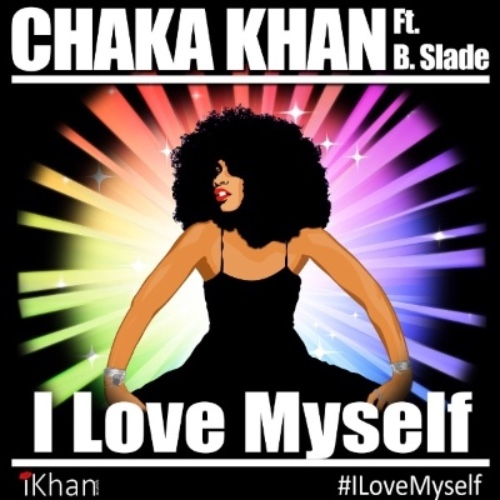 Legendary singer Chaka Khan has released the stunning visual for her recent single “I Love Myself” Ft. B.Slade. The nostalgic, soulful video, was directed by Seth Neblett and guest features 10 winners of the “I Love Myself” video contest – an initiative helmed by Khan to engage fans in helping to spread the message of self-esteem and acceptance by uploading a clip of themselves lip syncing the chorus of her new single.

“I Love Myself” was written and produced by GRAMMY-nominated singer/songwriter B. Slade, Eve Nelson and Khan and was released under her newly founded indie record label venture, iKhan Sounds. “I Love Myself” is an anthem that promotes self-esteem and putting one’s life in order. On the heels of last week’s release of the song, iKhan Sounds is releasing three remixes of “I Love Myself by West coast duo DJ Sidney Perry & Ranti Malone for Qubonix Productions. These remixes bring a soulful house arrangement with a classic club feel. The remixes are already being played by Los Angeles radio station KPFK on Kristi Lomax’s weekly show “One Track Mind” as well as L.A. and New York nightclubs.

With “I Love Myself,” Chaka Khan is delivering once more on her iconic status and introducing her powerhouse brand of vocals to a new generation of fans. “The lyrics to “I Love Myself” give voice to the deeply personal and continuing journey of my life and the obstacles I continue to overcome both publicly and privately,” notes Khan. Last year was a very painful period for Chaka following the deaths of longtime friends such as Prince, Natalie Cole, and Maurice White. “Having come through all those things deepens the already universal message of “I Love Myself” for me in ways I couldn’t have imagined a year ago when the song was originally slated for release,” confides Khan. “Loving yourself is a life-long process and even more so in the face of loss.”

Currently, Chaka Khan has embarked on a European tour that includes several music festivals such as the Park Life & Wild Life festivals in the United Kingdom and the Secret Solstice Festival in Reykjavik, Iceland. Chaka will then return stateside to take the stage at the Essence Festival in New Orleans on July 1 where iKhan Sounds merchandise will be available at her celebrity booth on the exhibition floor.