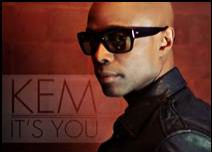 Kem has just revealed the video for his smash single “It’s You” from his upcoming album “Promise to Love”. The single has recently reached #1 on the Urban A/C radio airplay charts. The new album is available now.