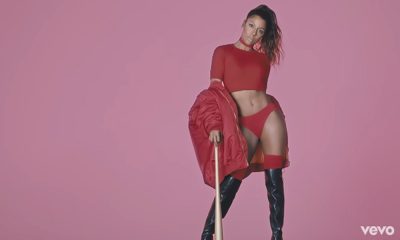 Emerging r&b star Victoria Monet returns with the video for her song “Ready,” the second single off her forthcoming “Life After Love” album. Life After Love chronicles Monét’s healing process after an intense break-up with her long-term partner & musical collaborator.

“Ready” a perfect antidote for the blues, makes for a turning point of the album, as it marks the place where the tracks shift from dealing with the break-up, to Monét rejoining the world and finding herself. Directed by Beyoncé’s choreographer JaQuel Knight, the video for “Ready” fuses bombastic dancing, dramatic outfit changes, and creative pizza-eating into a veritable summer jam.

Having proved her writing talents with work on all of Ariana Grande’s albums, including writing eight songs on Ariana’s certified platinum Dangerous Woman, Victoria Monét has also collaborated on tracks with Nas, Lupe Fiasco, Dr, Dre, & Ty Dolla $ign, and Fifth Harmony, and is ready to shine through as a singer in the forefront.

Cutting her teeth as a performer and a songwriter, Monét broke into the scene with a cold-call in 2014. In the time since, she’s separated herself from the pack as a stellar songwriter and performer – she toured with Fifth Harmony as their opening act all summer and is currently opening in arenas on Ariana’s Dangerous Woman Tour. In addition, Monét has also written for Chris Brown, T.I., Big Sean and Jhene Aiko.

“Life After Love” is slated to release in the coming months.