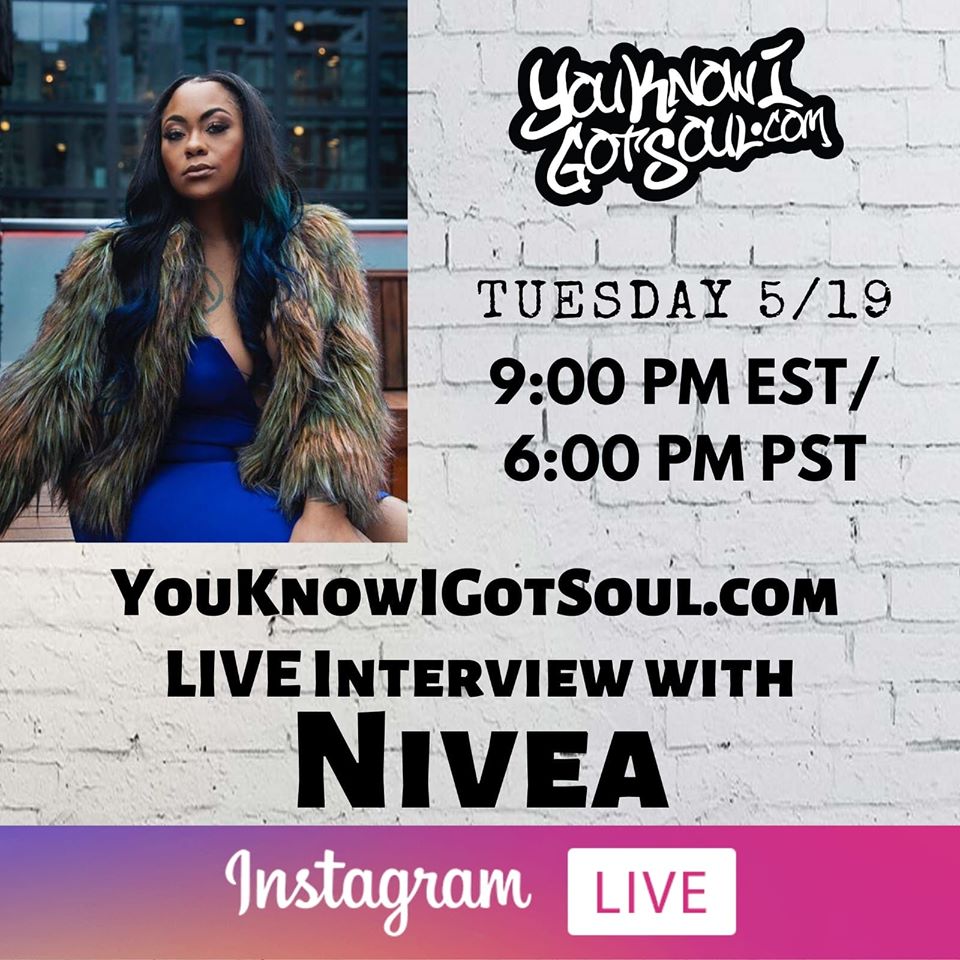 We recently had an opportunity to interview Nivea on Instagram Live. During our conversation, we talked about Nivea’s latest album “Mirrors”. We also reflected back on career which includes three studio albums and a handful of hits. We discuss the work she did with her ex-husband and hit songwriter The-Dream. Lastly we talk about what she has in the near future which includes a new entertainment company and possibly a new album from her alter ego Randy Watson.

YouKnowIGotSoul: Talk about your early beginnings with Noontime. I know you were heavily working with Bryan-Michael Cox and Jagged Edge in the beginning.

Nivea: Prior to meeting them, I was actually part of Organized Noize when I was 15. I had a manager that got me out of that situation and we moved over to Noontime. They were a great company that represented a lot of songwriters and producers like the twins from Jagged Edge, Johnta Austin, Teddy Bishop, J. Que Smith and B-Cox. I was 17 at that time and that’s where “Don’t Mess With My Man” came from. I did my record deal when I was 18 and that song was included on my album. Noontime had a whole crew of talent.

YouKnowIGotSoul: Talk about why there are two different versions of “Don’t Mess With My Man”.

Nivea: The version that came out is not a different vocal version, but it’s a different musical version. I was 16 when I did that song and it didn’t come out until I was 19, so Bryan wanted to redo the music because it sounded a bit dated. I like the original one. A lot of people say that they prefer the original over the remix. Either way, Bryan is incredible. The one that was released was a newer version.

YouKnowIGotSoul: Along with your songs that you created with the Noontime crew, you had records with The Neptunes and R. Kelly on your debut album.

Nivea: My label at the time Jive also represented them. The Neptunes were starting a production deal with them at the time and I was just fortunate to be one of the artists that got to work with them.

YouKnowIGotSoul: The lead single “Don’t Mess With The Radio” is a lot different than the rest of the album, so talk about that song.

Nivea: That song was on my demo that I did with Organized Noize. It was actually very Urban, but it wasn’t received that way when I was brought up. I think it was more because of my image with the colored hair, so people looked at it more like Pop. If you listen to it now, it’s very Urban. I didn’t gravitate towards Urban until “Don’t Mess With My Man” came out.

YouKnowIGotSoul: Take me back to your second album “Complicated” album. That album had some of The-Dream’s earliest placements.

Nivea: “Complicated” was a very special album to me. My ex-husband The-Dream and I finished that up together. I wrote a lot of personal truths on that record. The-Dream had the Britney Spears and Madonna song, some B2K records and then my song “Okay”. That record in particular launched him, but it wasn’t until he got “Umbrella” by Rihanna that people realized how great he is. I’m just real fortunate people still love my music after all this time.

YouKnowIGotSoul: Your third album “Animalistic” album was so ahead of its time. I don’t think it’s available on any streaming platforms though!

Nivea: It’s available on Amazon. I was a new mom at that point and my body was changing. My voice wasn’t the same, so I don’t like my vocal performance on that album as much I would have liked in my past and present. However that album represents a time where The-Dream was thriving as a songwriter. If you listen to “Animalistic”, you can hear everything Rihanna and Beyonce ended up doing. It was The-Dream knowing how to tell a story and make it fun. He was coming into his own as a songwriter. I think I performed poorly vocally on that record, but you can’t deny that the records were dope. I’m still proud of him because that album was his baby. He did a lot of that himself.

YouKnowIGotSoul: You are probably one of the most underrated of your era just in terms of your music and talent.

Nivea: I take it with a grain of salt because it’s true, but you also have to consider the time. We didn’t have the control artists have now. There’s different outlets for you to be successful as an independent artist. All we had was magazines and you needed a big corporation to put you on. Now you can go on social media and make it work. None of that existed and I was thriving before MySpace. I’m learning to navigate the music industry right now. It’s dope but it’s different. Sometimes it’s a bit tedious because it allows so many new artists to get in because there are so many ways. I’m seeing even more competition than before and it’s hard to keep people focused. That’s not the era I come from.

YouKnowIGotSoul: Talk about the Randy Watson project that you were working on a few years back.

Nivea: Like Beyonce had Sasha Fierce, this was an alter ego for me. My father is a musician and he can play instruments. I was introduced to every genre of music because of him. A lot of people don’t know I am into Rock, Country and Techno. When I was going through my divorce, I was just inspired to create. My dad played the guitar and I would sing. It was all recorded on my laptop, but it was real and the songs are dope. I still plan on releasing it, but the conflict is whether I should redo it or leave it as raw as possible. You can hear buses driving by in the recordings right now. *Laughs* I actually like to capture the authenticity and I don’t want to mess with it, but it’s a conflict. I also want to continue with R&B and then slowly introduce the acoustic stuff. I still plan on doing Randy Watson, but you have to pay attention to the times. I did “Mirrors” and it did well. Not as well as I would have hoped, but it let me know that I need to pursue my other passions like my entertainment company and other business ventures.

YouKnowIGotSoul: Talk about your latest album “Mirrors” because that came out of nowhere.

Nivea: I had been going through a lot of stuff. I was like “Where do I fit in?”. I was so fortunate that people were like “I still listen to your music”. I was like “Do you realize how long that was?”. Who expects their records to last that long? That was what pushed me to do “Mirrors”. Life had me in a different space musically and I wasn’t inspired. I got through that by meeting fans and my children encouraging me to get back out there and I did it.

Nivea: I just started it, it’s called A.T.E. (All Things Entertainment). I represent talent until a certain point just so I can put that on and navigate them to a bigger position in their careers. I’m excited about that. It’s a big passion of mine. I love to vocal produce and put a artist’s whole project together. As well as doing that, I’ve been inspired to do some new music as well.