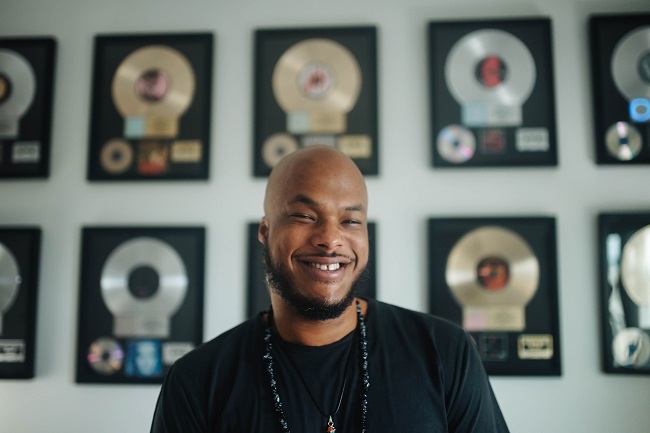 We recently caught up with Pierre Medor for an interview on Instagram Live. Pierre started off his career as part of the the production team Tha Cornaboyz and produced for the likes of Omarion, Marques Houston and Tynisha Keli. Since then he has gone on to produce a handful of songs including Usher’s new single “Bad Habits”. We talk about that song and much more in this interview.

YouKnowIGotSoul: The Cornaboyz worked closely with Jagged Edge early on. We’ve heard that the twins Brian and Brandon can write songs very fast. What stood out to you when you first started working with the group?

Pierre Medor: The speed for one and the fact that there was no pens or pads involved. That was our first experience coming into the business with professional writers. To see them hearing the beat for the first time, immediately singing some amazing melodies and then spin it into the songs we know today.

YouKnowIGotSoul: I noticed you’re in the credits for “1, 2 Step” by Ciara. Talk about being part of that song.

Pierre Medor: With that record, I didn’t have anything to do with the music production. At the time I was managed by Chris Hicks who was part of the Noontime conglomerate. Jazze Pha was part of that family of producers as well. When he did the record, he called me and I vocal produced the record. I already had a rapport built with Ciara at the time over at RedZone with Tricky Stewart and The-Dream. It was a fun experience. Ciara was a new artist and she was very humble. She wasn’t sure about saying the line “top charted, ever since the day I started” but I told her to do it because it was true. *Laughs*

Pierre Medor: Early on, The Cornaboyz was my partner Daniel Moore, myself and D-Town. Daniel was a vocal scholar and worked with choirs. That gave me the opportunity to see how to really vocals to open up. Then it was being exposed to people like J. Que Smith, Tricky Stewart and Kuk Harrell. When you watch these guys, you realize there’s a science to it and you don’t end up creating magic without someone steering the journey. Those are the guys that showed me the ropes and helped me gain an identity.

YouKnowIGotSoul: Talk about those early Cornaboyz days and just grinding during that time.

Pierre Medor: When I think about it now, it was a magical time. There was so much talent. Daniel Moore is currently the musical director for Mariah Carey and tours the world with her. My other partner D-Town is pretty much Rico Love’s righthand man so that means all the music goes through him, D-Town touches the music. We were just working everyday and pursuing that dream.

YouKnowIGotSoul: Some of your early placements were “I Wish” by Omarion and “All Because Of You” by Marques Houston. Talk about those songs.

Pierre Medor: When you’re a part of a record, there’s a lot of ways you can be involved. With each one, there was a different iteration. With “All Because Of You”, that track was produced by D-Town and Rico Love wrote it. I demoed and vocal produced it. We had a whole machine. I remember being with Marques Houston and sensing that the song was special. That was evident in how that record played out. With “I Wish” by Omarion, D-Town produced that record as hell. What ended up happening is that Rico penned that one out and Q. Amey demoed the song. It’s so funny with that song because when we cut the record with Omarion, he was out of the phase when his voice was changing and he had a deeper tone, so there was a question on whether he would be able to pull off the song because it was higher. It was a personal challenge for me and we got to it. Omarion killed it and it’s the first song on his album which was number one for a few weeks.

YouKnowIGotSoul: You guys also did Asia Cruise’s “Selfish” and Tynisha Keli’s “I Wish You Loved Me”. Those songs weren’t huge smashes on the charts, but they were huge on MySpace. What did that teach you about the music industry?

Pierre Medor: When you’re ahead of the curve, you can already be achieving at the new level of success. In the case with Tynisha Keli, that record was so amazing. She wasn’t the first person to cut it but she was the best person. That record caught fire on MySpace. We didn’t have any sense of what that meant or how to monetize it. Now it’s become the standard of how the record business lives. With Asia Cruise, I think it was a marketing ploy gone wrong. They tried to keep her identity very obscure and they didn’t really want to showcase the Asian side of her. I didn’t understand the reasoning behind it, but it was a call from her label. It was something they tried to do to get people to love the music first before they loved the artist. I guess it did work because a lot of people were drawn to the record.

YouKnowIGotSoul: Talk about finding success with Tynisha Keli overseas in Japan because she was huge over there.

Pierre Medor: That was an amazing experience to be a part of. I vocal produced that album and her former manager Tyrrell Bing was at the spearhead of pushing her to Japan. The numbers were indicative that there was a fanbase for her in Japan. Basically we ended up putting that record together in a short period of time and delivered the album. Tyrrell went overseas with Tynisha and they did shows. It was a really great experience to see how the music we were creating connected internationally.

YouKnowIGotSoul: You and Rico Love did a lot of great music after Tha Cornaboyz era. Talk about the records you did with Brandy on the “Two Eleven” album.

Pierre Medor: Anybody that knows me knows how much I love Brandy’s voice. Working with her made it that much more magical because you get in and you see it’s not smoke and mirrors. She sings with such conviction.

YouKnowIGotSoul: Talk about your work with Usher because you’ve done a lot with him throughout the years.

Pierre Medor: Usher was one of the first people to put a deal for Tha Cornaboyz. He was a believer in our talent and as evidenced to that, Rico Love and him ended up solidifying their relationship. He basically mentored Rico and opened up some doors for him as a songwriter. Through that relationship, we were able to create with him. We did the opening track to the “Looking 4 Myself” album and he was giving his the leeway to not do the typical R&B. He was allowing us to go and explore. If you listen to that album, you can’t just call it R&B.

Pierre Medor: That was a record facilitated through a relationship with Keith Thomas who actually vocal produced that song. He had to make sure Usher delivered that great vocal production. He really fought for this record and it ended up being one of Usher’s favorites. I think it’s because of the honesty. If there’s one thing that we love about Usher, it’s not just about the hits but it’s the honesty. That’s what really connected on this record.

YouKnowIGotSoul: The “Computer Love” sample in the bridge was brilliant too.

Pierre Medor: Usher was playing some records for other producers and The-Dream really responded to the record and was like “This is a smash. Who produced this?”. Dream called me after and was like “You have to put that sample. This record is already a smash, but don’t miss the opportunity to make it magical”. That part is a moment especially when you watch the video. Usher is in my top three best vocalists that I’ve had the opportunity to work with. The level of attention to detail and what he sings. He always makes sure you’re feeling something. It’s not just about it sounding good, he wants you to feel what he’s singing.

YouKnowIGotSoul: What else are you working on?

Pierre Medor: We have India Shawn as well as a lot of new artists. I’m working with my artist T’Melle that we’ve been working on. She’s a phenomenal vocalist and we have an EP called “Dedicated” which is out in the next few weeks.