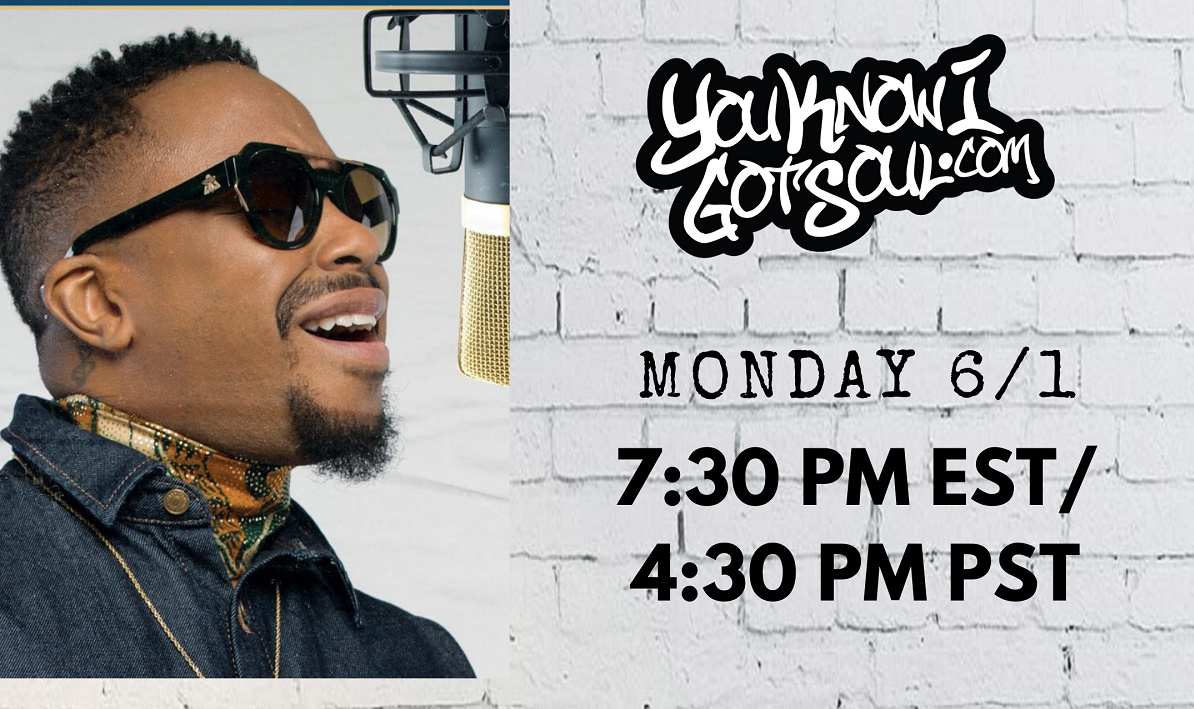 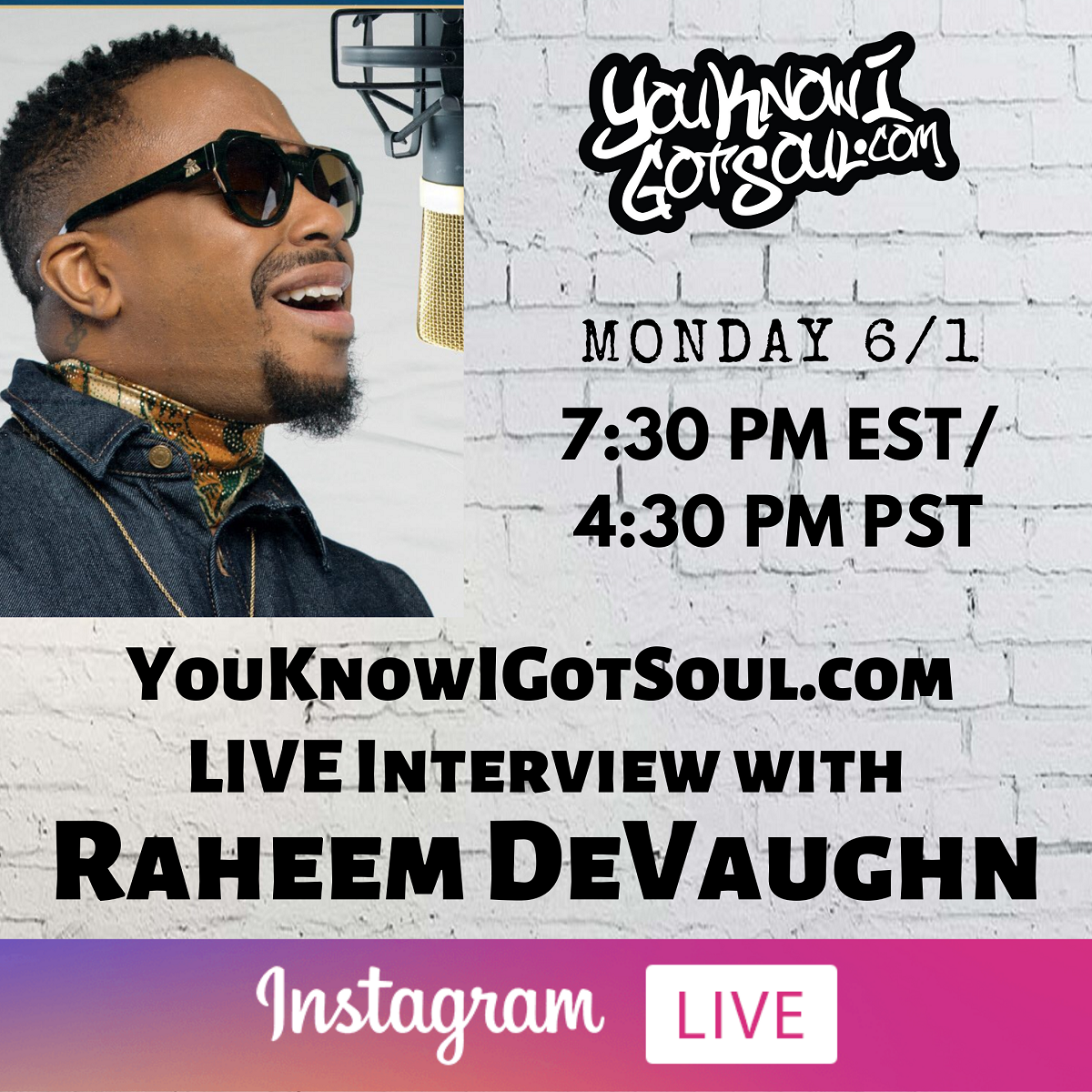 We recently caught up with Raheem DeVaughn for an interview on Instagram Live. During our conversation, we talked about how he is coping with all that is going on in our world right now, keeping his fans engaged during the pandemic, the new Director of A&R role he has at his label, the new music he’s been working on, and he he constantly innovates throughout his career.

YouKnowIGotSoul: How are you holding up with everything going on in the world right now?

Raheem DeVaughn: The last 4 days have been rough for me mentally. I pretty much have been talking about this since the first album, even before that. Since “The Healing Project”. To see it kinda play out and to feel like you understand the agenda for the planet and the masses and the 1%ers, I’ve done the marching. A few years back, I got locked up with Dr. Cornell West for the night. If those walls could talk! I’ve got to do a book at some point. To kinda see it play out, you go from hurt to sad to angry, to even feeling defeated, and here we are once again. That’s just me from a perspective of being a black man in America and on the planet. I’ve been all around the world. I know the best place for me to be is where I’m at right now. I’m just going to be working around the clock in the studio. Making something that reflects the times we are living in, but also we can’t become so consumed with hatred and hurt that disparity that we lose sight of love. Love and prayer and meditation and also action is going to ultimately change things not just in this country, but in the planet. Systematic racism is not just something we encounter in the states. We still have to be light bearers for the world. There is an energy and driving force out there that doesn’t want that. They want us to live in darkness. You just have to be mindful of that and use common sense through this time. It’s going to be the babies, the new millennials that raise enough hell and shake things up. Unfortunately it’s one of those things that has to play out. This is decades of frustration. We still didn’t get the just due for Rodney King. Again, it’s got to play out and we got to do our part as activists and artists. Everybody has a role to play, even media. For all of the fans out there, I’m building my own platform. Not to disengage from Instagram and Twitter, but my feelings are like, they are already dictating what we can and can’t do. If you’re in a position, to all of the artists out there, I’m definitely going to be more heavy in my entrepreneurship to build my own community so me and my fans can do what we want to do. My artist friends too, they are welcome to come hang out there too. That’s the mindset and moving forward. At the end of the day, whoever it is, no matter how many followers, you are a movement within yourself. Social media platforms make money hand over first off of our content that we end up not owning or they can flag it or dictate what we can talk about. As long as you are on their server, it’s a tracking device. Everybody has a view and things they want to rage about or comment on. Be smart. Right now, whatever your plans are, sometimes we show too much. Especially at a time like this. It’s interesting times man. They say what a time to be alive. I say what a time to be in love. I’m putting together a quick EP, with my man KP from The Colleagues. So it will be a project he’s putting out featuring myself.

YouKnowIGotSoul: Talk about how you’ve been able to stay so active and keep your fans engaged during this quarantine.

Raheem DeVaughn: The connection I’ve had with my audience and with music lovers that come into contact with me, I’ve been told I have an infectious spirit. Something like that, you’ve got to harness the energy properly, it can be dangerous. I try to be cognizant of that and be the for people and the culture. I’ve been one of those guys who does it first but not necessarily do it best. I allow myself to be the guinea pig for things and not get the credit people feel like I deserve. Once I decided to understand, what I didn’t before, is that I stopped chasing the standards of acceptance or that people get caught up in being part of the music industry. Letting the industry dictate how dope I am or what accolades I deserve or whatever. At the end of the day, my catalog and the music I make, it belongs to the people, not the industry. Once I was able to disconnect and unplug from that and understand that I got the juice. It took seven albums to realize that and to become a master at what I do. Now I feel like I am a master of my craft for what I need to do and people enjoy about Raheem DeVaughn when they listen to the music or see me on stage or tap in for an online show. It’s important during this time to be the light for the people that support me. We have to have that sense of escapism and a way to unplug. Whether it’s Netflix, a book, meditation, more time with kids. All of that to just go from one day the world be moving one way, and they tell you it’s at a halt. To have to operate under the new normal, it’s a total mind f*ck. There are two ways to deal with it: come out on top of this thing and reboot and reset as the obstacles get thrown your way, or back into a corner and crumble. It’s also to inspire other people around me, even cats that came out before me and during the time I came out. I’ve always been one to lead by example and a hustler and go getter and innovative. It’s been fun to challenge myself. Either throwback Tuesdays or Mixtape Mondays or Woke Wednesdays. I’ve also been doing online performances, I’ve been using the StageIt platform to create the exclusivity for fans. I’m trying to make a statement that we can’t devalue our artistry. You’ve still got to keep some type of monetization to it. Especially black music and culture which has been exploited. I make the online concert to where you can set your own ticket price, out of consideration of what’s going on in the world. Everybody might not have $50 to pay for an online concert, or even $10. My thing is just again, create that sense of escapism, not only for myself, but more importantly for the person outside of the screen. Over the past 10 weeks, I’ve gotten DMs or messages about how people are fighting cancer and or were in isolation from having Covid-19, and my activities helped them get through that. It’s why we do what we do and blessed with the gift we have and just using it properly.

YouKnowIGotSoul: Talk to us about your new role as Director of A&R at your label SRG/ILS.

Raheem DeVaughn: First off, shout out to Claude Villani who has been a great partner and mentor. Me and him have the same agenda which is preservation of the culture of R&B and Soul music. From a time long before I even started making records. My labelmates are Brian McKnight, Avant, Ralph Tresvant who has a new single coming out. Vivian Green, shout out to Kwame. Brave, Shawn Stockman. After 7. When you think about all of those different names and the black music and the culture, I did my first tour with Brian McKnight and New Edition, in 2005. It always comes full circle. It’s great to be in the mix of all of that creative juice and ideas and legacy. Then also to have a hand in the fact I can go sign new millennials and bring them on board. We are looking for those next artists that have the full package. We can look back from 2030 and say I had a great run as an artist and as a business, lord willing. Definitely the SRG/ILS business model is different, it’s for the artists who are very hands on in that sense. You get a statement and royalty check form the label, but you gotta earn it and put in the work. It’s interesting, you never know who is watching and who will be that believer. I look forward to a long musical relationship. Not just as an artist but as a business man. I have other ventures going on as well. I’ve always had an interest in it. Real talk, every album I put out I have A&Red it as myself. To be able to separate yourself from your music and be able to think from a consumer standpoint is always the task. To have somebody who runs a million dollar company trust my ears that much and what I think about music, to allow me to have an opinion, is very humbling. Definitely I’m in the fetus stage of it, they just made the announcement. There are some things I have my eyes on and deals I’m trying to close. Shout out to Mike Phillips, he was my first signing over there. We had the task of getting him off of Hidden Beach and closing the chapter on that. I’m happy for him.

YouKnowIGotSoul: You have had such a remarkable journey. We would love to see a movie made about your career.

Raheem DeVaughn: When you work how I work and how I’m wired, you just look up and 10 or 15 years has passed. I’m thankful for it all, I still think I haven’t scratched the surface of what I can do. I just try to find ways to constantly challenge myself and new ways to do it. I was the first soul singer to do mixtapes, the way I did them. I created a phenomenon of something that’s way bigger than me now. When I look at the success of Trey Songz or Drake doing them, when they first came out, and singing. I was the first guy to do that as a singer. It don’t always get talked about, but that’s what it is. Facts are facts. Doing it for the people, I do it for the music lovers and those who enjoy live performance. Whatever the new norm is, I’m with it. When our back is against the wall, I come out swinging. It’s a tough time for myself and a lot of artists right now on a lot of different levels. Shout out to everyone that supports the music. I’m thankful for everything that the creator allows me to still be able to do, even in this time. What a time to be alive.

YouKnowIGotSoul: What else can you tell us about the new EP?

Raheem DeVaughn: No official date, but shooting for July for the digital release. I got the title already, but I can’t put it out there yet. New music on the way. Also, the album, #8, will be out sometime before the new year. “2020 Love Affairs”. Listen out for that. Also got an album being finished up with a very well known underground hip hop producer from Detroit, it’s a full album. We may put that out this year as well. Can’t say who it is yet, but those records are crazy. That could be out very soon as well. A lot of music on the way. Support my brother Wes Felton. I’ve got a deck full of aces.