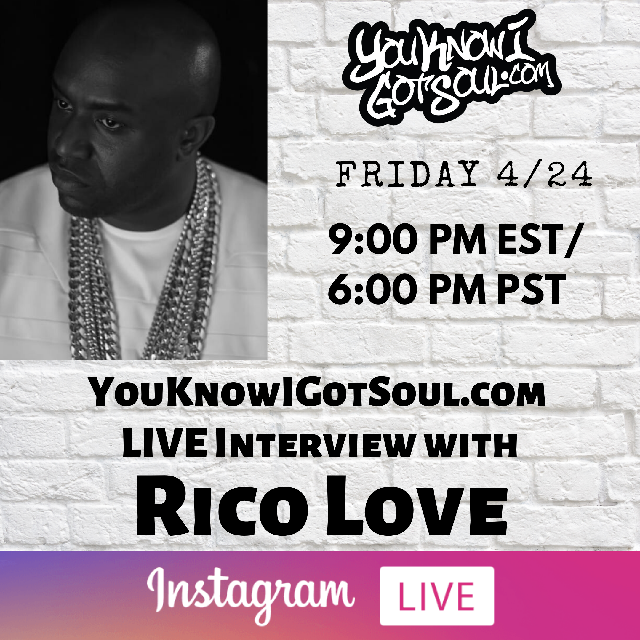 We recently caught up with super producer/songwriter Rico Love for an interview on Instagram Live. We talked to Rico about his early beginnings working with Jagged Edge, writing “Throwback” by Usher as well as his massive success in the early 2010’s. We also talk about some of his most recent work with Pleasure P and Deborah Cox as well as his new album.

YouKnowIGotSoul: You told us you didn’t know you could get paid for writing music until you got a check for “All Because Of You” by Marques Houston?

Rico Love: I did that song with The Corna Boyz. D-Town was like “Did you get your check for that?” and I was like “What check?”. I called ASCAP and asked them if I was supposed to get money and they were like “Oh sorry, we didn’t have you in our database” and then they sent me a check for $60,000. I remember thinking like “What? From writing songs?”. I had no clue it worked like that because “Throwback” by Usher wasn’t a single, but later I got radio checks for that song because “Confessions” was such a big album. Even non-single songs were being played on radio. I made like $30,000 for “Throwback” from radio play.

YouKnowIGotSoul: Take me back to the creation of Pleasure P’s debut album “The Introduction Of Marcus Cooper” because that project is underappreciated.

Rico Love: I’m so proud of that body of work. Pleasure introduced me to Static Major and I was in awe because he’s a genius. God rest the dead. Me and Pleasure had six or seven records and then he brought Static in. I was nervous because he gave Pleasure P the song “Fire Lovin” and that felt like a Pretty Ricky record. I was like “He’s going to come in and take over the whole album”. I found out later that he was feeling the same way about me. Everyday Pleasure would bring a bottle of champagne into the studio. There would be a bunch of girls in the studio and he would just record. It was a party everyday. We still have 40 songs in the archive because we were just recording tons of songs. When I wrote ‘Boyfriend #2″, we were actually in Atlanta and I remember thinking to myself “This could be it!”. I feel it was one of the most captivating bodies of work that people don’t appreciate. I always tell Pleasure that people consider Pretty Ricky a novelty group because they were sticking their tongues out and grinding, but sonically, tone, vocal ability and range? Not many guys can go toe to toe with Pleasure P. He’s the Keith Sweat of our time. He had that type of voice. I believe that Pleasure P in a different time would have went on to be what Keith Sweat is. There’s something in me that still believes it’s not too late for guys like Pleasure P. With the right outlet, he can make something that’s appreciated. Things have shifted and there’s so dynamics that have to go into it though that we don’t get the opportunity to fully appreciate tone, vocal ability, diction and placement. Listen to Pleasure P’s adlibs on that album, we were sculpting it and piecing it together.

YouKnowIGotSoul: Some of your hits like “4 AM” by Melanie Fiona, “Motivation” by Kelly Rowland and “Heart Attack” by Trey Songz came out during a weird period of R&B, so I’m not sure if those songs got the mainstream attention that they deserved.

Rico Love: All of those records were number one at Urban radio, but when people run down the charts, they’ll say that it peaked at number 22 on the Hot 100. Do you know what a number one record at Urban means? It means you have the coolest song in the country. Black people dictate what’s hot and most of my hits were on the Urban side and I’m so proud of that. I know a lot of guys who had more Pop hits, but mine mean more to the culture. It was me and Young Money for five years at Urban radio. It was a cool energy and that’s why the “Turn The Lights On” meant more. I was facing off against Lil Wayne, Drake and Nicki Minaj. I think a lot of guys get credit for having the numbers on the Pop charts and that’s great, but I bet you fans would think my songs were bigger because it made them feel something. Look at Usher’s song “Scream” and how fast it went down. “Scream” went up the charts because they forced it. They pushed it as far as it could go and then it died. You don’t even hear “Scream” anymore but you still hear “There Goes My Baby”.

YouKnowIGotSoul: Right now your focus is developing and working with new artists. Is that more rewarding for you right now?

Rico Love: Absolutely because ownership is the key. Think about it, I made millions of dollars writing songs for other people, so how much did the companies make? I want full creative control, dictate what the single is going to be and develop these artists. The “Rico Love Presents” album comes out May 8th and that concept was like “Let me find the most talented female artists in the world and give them my vision”. I’m doing it the way I want to do it.

YouKnowIGotSoul: It’s a surprise to see Deborah Cox, Sevyn Streeter and K. Michelle on your “Emerging Women Of R&B” album as well.

Rico Love: I didn’t feel like I could put out that album with only new artists without paying homage to the ones that have already emerged. I wanted to be able to say “These are artists you look up to and they’re going to be participating on this record”. You’re going to see my vision. Remember at one point, you had never heard of Sevyn Streeter. She was Amber from that group and they were talking about virginity. You have to understand that this is the transition and progression. This is what we’re getting into.