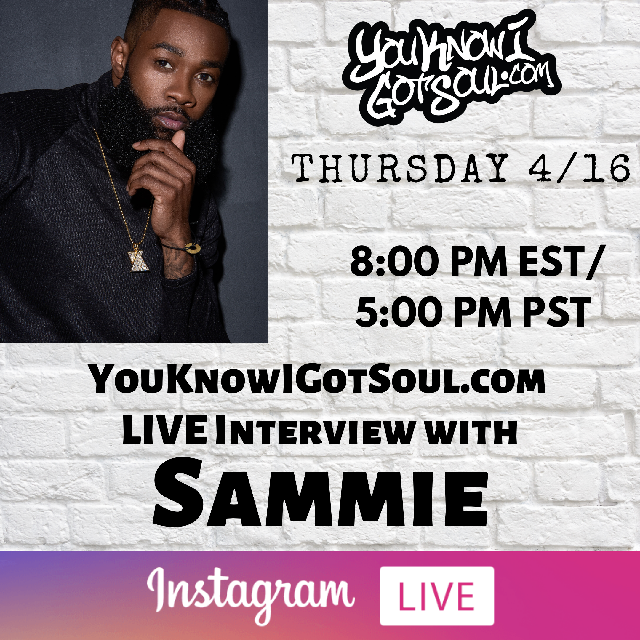 We recently caught up with Sammie for an interview on Instagram Live. During our conversation, we touched on his new single “Friend Zone”, his upcoming album “Such Is Life”, the Millennium tour and some of his history including his single “I Like It”.

Sammie: It’s so cool that I have my own lane. I’ve always tried to find a way to innovate and be distinct. I’m just unapologetically being myself. “Friend Zone” is from a real life situation. I have a best friend that I’ve known for over a decade. A lot of people see how we interact, but it’s a genuine love. We’ve been there for each other when we’ve had our heartbroken. I could always turn to her. We mutually accepted fate that it’s best to stay as best friends and not risk it to try to be a union in case it doesn’t work out. I thought that was profound. Every guy has been friend zoned by women and some women are friend zoned by some men. I felt it was a universal and relatable record.

YouKnowIGotSoul: You’ve said on Twitter that your new album “Such Is Life” will sound like 90’s R&B. We’re some of the biggest critics out there, so we’re expecting you to back it up. What elements on this album remind you of 90’s R&B?

Sammie: The storytelling. I have this record on my album called “Closure”. It opens up the album and a lot of times, I felt like closure was a scam. That one last moment that you have with somebody, it can make you stay in that toxic relationship for longer than you’re supposed to. You’re supposed to let it go. Instead of answering that text or meeting up for that dinner, now you find yourself in a situation of redundancy. I think that subject matter has been lacking in R&B for a long time. I was listening to Carl Thomas’ “Emotional” and it was a phenomenal project. I was all up in my feelings at 13 and I hadn’t experienced anything. My new album puts me in that space where everything truly is relatable. I think it’s going to cause a lot of people to heal and that was the basis of it. I didn’t chase radio, I just wanted to give anyone that claims to miss 90’s R&B to feel passion and love. That’s what this album is for. If you don’t like that, don’t even listen to it. If you want to be cool, I wasn’t trying to supply that. Everyone is trying to do the autotuned and swag music. I don’t want to do that. I want to feed spirits and something people can play 15-20 years from now.

YouKnowIGotSoul: You’re on the new Millennium tour now. You were upset last year that you weren’t included in the original tour, so talk about the shows that you’ve done.

Sammie: I had a ball out there. Everyone showed me so much love. I think it connected me with my day one fans that supported me. They gave me that opportunity to rock out in front 15-20k people. I’ve done arena tours in my career, so to have to start over again some years ago, I remember when it was just ten people and now to see the growth, it’s very humbling and refreshing. I’m entering my 21st year and to see them still love me like they do, I’m forever indebted to my Sammie lovers. I felt that love while I was out on the road.

YouKnowIGotSoul: On tour, you were performing the hits like “I Like It” and “Come With Me”, but you’re also performing your newer records that were only released independently. The fans were singing every song too, so that really let us know that you’re locked in with your fans.

Sammie: My true fans know all the old stuff as well as the mixtape stuff. I’m one of the only ones on the tour that has put out music consistently. I’ve been on the charts and they were all independent records. It was imperative to not just do the hits like “Kiss Me Thru The Phone” but also some “Expiration Dates” and “Tsunami”. Those records were very impactful these last few years. I’m blessed to take people on a time machine.